I'm working hard on the edits for my new novel (tentatively titled Fault Lines), so I'm getting less reading done than I was in the early months of the Trump Regime.

Organizing our books turned up a number of books I hadn't read in years. This is one of them.


Tey wrote (mostly) mystery novels. Both this novel and my other favorite book by Tey, Miss Pym Disposes, are sort of mysteries. But neither really fits snugly in the genre. Miss Pym Disposes concerns a popular novelist, Miss Pym, who is doing a favor to an old schoolmate, by coming to the school that friend now runs and giving a lecture on her book series. While she's there, a student is killed, and Miss Pym, sort of by accident, learns who the killer is.

What's great about the Miss Pym book, however, is the world-building, though it feels odd to say that. The book is set in a school that trains young women to teach physical education in the British public schools, or to do medicine. Most of the interest lies in the characters of the young women, as well as their training. The murder does function holistically, though -- it's not pasted on. This is one of my favorite books.

Daughter of Time features the main character in Tey's mystery series, Inspector Grant. But it's not a typical murder mystery. Instead, we find Grant lying in the hospital, condemned to bed rest for weeks due to a badly broken leg. He's bored, and among his many visitors comes his actress friend who brings him a mystery to solve. Who killed the Princes in the Tower, and why?

In this book, the thrill of academic research is the true star. It was written in pre-internet 1951s, and so all the research must be done via libraries and other sources of print technology. We watch as Grant and his research assistant, a young American student, uncover the facts of the case, and make a crucial point about truth v. truthiness. Highly recommended.

This is one of Lewis's later novels. As all Lewis fans know, his earliest and his last novels are a mixed bag. That is, while they can be excellent, they can also be an appalling mess. Kingsblood Royal borders on the appalling mess. I think Lewis pulls it off, though, and it's a very interesting book to read in our current political climate.

Published in 1947, the novel deals with the racism and xenophobia of America in the first half of the 20th century. The main character is a soldier, Neil Kingsblood, badly wounded in WWII, and just returning to civilian life. He's got a pretty wife, a pretty toddler, and a pretty life, cashing in on his status as a scion of the upper middle class (married to a daughter of the town's upper class) while working in the town's most important bank. In the opening chapters of the book, Lewis paints him as a typical, though mostly likable, American of his era. Though he witnesses the racism and xenophobia of his time, he's made uneasy by it; and though he reproduces that racism and xenophobia in a mild form, he's unhappy with himself when he does so.

Then he discovers, while doing genealogical research, that his great-great-great grandfather was a black man. By the laws of the time, this makes Neil (and his daughter) black as well. Of course, he has the ability to continue to "pass" if he wishes to, and for quite awhile he does so. What happens to his life when he "comes out" as black forms the heart of the book.

The things that upper-class and middle-class white citizens say about black people and other non-Native citizens, and the way they treat black citizens, as well as what we're told by the black characters themselves, make this interesting reading. Over and over as I read through it I thought how I'd heard someone on the news or FB or YouTube say that exact thing, or how Donald Trump or some other member of the GOP had made that exact comment recently.

Over fifty years, and nothing has changed in America.

When this book was published, white supremacists of the 1950s tried to get the FBI to declare it a sedulous work, and have all copies of it destroyed. Oh, and the white people of the time thought it was entirely unrealistic.

Worth reading if you're a Lewis fan (and you should be!) or if you're interested in sociological novels.


Stephen King, Storm of the Century


Blah, blah, blah, the devil comes to a Maine town during a bad snowstorm, fap fap fap, terrible crimes ensue, booga-booga-booga people are flawed. And he steals the conclusion from Shirley Jackson's "The Lottery."

I checked this one out of the library mainly b/c I was hoping King would do something useful with the storm. I like books with lots of snow in them. But yeah, he wasted most of the chances he could have used for doing something with the storm.

A manga, this follows a few weeks in the life of a Japanese man, a stay-at-home-dad, who is visited by the Canadian man who married his twin brother (in Canada).

Yaishi, the Japanese SAHD, has been estranged from his twin brother, knew his brother was gay, but did not know he had married. Yaishi's daughter, Kana, takes to her new uncle at once. Yaishi is more troubled -- apparently being gay in Japan is still very proscribed.

The day-to-day life and the art here are wonderful. The story doesn't resolve, of course. This is just the first volume. I enjoyed it, though I didn't like it as much as I like Kaoru Mori's Bride's Story.

My favorite part is how immense, fat, and hairy the artist made the brother's husband, Mike Flanagan. Ganji sure are strange-looking! 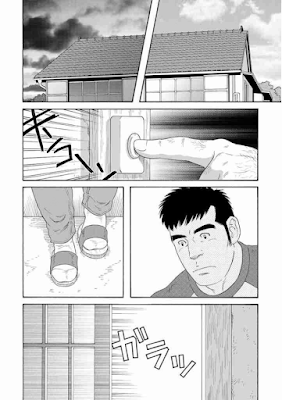 I read the first four volumes of this graphic novel some time ago.  This past week I caught up on the next 3 volumes.

As before, we're in the POV of the child born on the first page of Vol. 1. As before, the plot advances only slowly. Still has great characters and beautiful art, though. 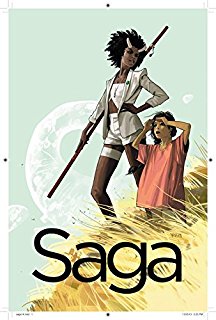 
I forgot -- one good reason to read Kingsblood Royal is to combat the BS coming from our current conservatives, that "presentism" nonsense.

"But you can't judge X from WhateverYear by the standards of the present! People back then just didn't THINK that way!"

Yeah, every time someone says that, I think of writers from WhateverYear who obviously did think that way. Kingsblood Royal is another example.