Passover starts tonight at sunset. The kid's uncle drove down from Fayetteville to join us, bringing the Kid along. They arrived last night.

All day, the house has been filled with lovely cooking smells. Dr. Skull is making mazto ball soup, roast chicken, a mushroom-broccoli casserole, and other items I have not yet been made aware of. My contribution is the haroset and latkes.

We found some KFP cakes and macaroons at the Bentonville Fresh Market which we'll have for dessert.

Happy Passover to all y'all who celebrate!

Posted by delagar at 5:49 PM No comments:


Here's a challenge going around writing circles -- go to the 7th page of your work in progress, share 7 sentences, and tag 7 writers to do the same.

I'm not sure who is working and writing in my circle of readers right now, but if you are, I tag you!


Feeling itchy and annoyed, I went back to the desk and opened the pocket watch. Will blinked into appearance, over by the sofa. He looked around him. “Is this where we live?”
“It’s where I live.” I studied the watch: it was still ticking steadily, and set to 10:22. I didn’t know if that was a.m. or p.m. I checked my phone, and found it was 6:23 p.m. here.
“What’s for dinner?” Will asked.
I glanced at him. “Aren’t you non-corporeal?”
He laughed. “A ghost, you mean?”


Today is the last day of Spring Break. We took the kid back up to school yesterday, only to find that their dorm did not open until noon today. So they're staying with their Uncle Charger, who is very kindly going to help them move back in today.

I'm getting sick again, I think -- some sort of stomach ailment. Queasy and feverish, though no actual vomit yet.

Soul of a Nation


Yesterday for my birthday we went up to Crystal Bridges and saw the special exhibit, Soul of a Nation. An excellent exhibit.

And the museum was packed. As much as I dislike the corporate practices of the current generation of Waltons, I have to admit this museum is a gift to the people of Arkansas. Before this museum, most people in the state had no access to any art museum, or at least only rare access. You had to drive to Tulsa, or Kansas City, a prospect out of reach for many of the state's working people.

Nor -- as this exhibit shows -- is Crystal Bridges playing it safe. As this article notes, it's bringing valid and provocative art to its visitors. This latest exhibit demonstrates that clearly.

Basically, you join it by giving your name and address. Then you're in this group with all your neighbors who have also joined, within what seems to me to be a two or three mile radius. People can then post information or questions they have.

For instance, a guy who will do lawn work in the area may post. Then you could hire him to mow your lawn.

Or if you've lost your dog, you can post a picture of the dog and ask your neighbors to keep an eye out.

I joined a few weeks ago, mainly to see what it was about.

What it's mostly about, as it turns out, is scared white people posting about how
"some man" knocked on their door. "This man," they post breathlessly, "knocked on my door today! Twice!" (Picture posted of a young brown man heading down the sidewalk.)

Or: "This man was walking down our street! He is looking at all the houses!" (Picture posted of an older white man.)

Or: "This man is running in our neighborhood! Should I call the police?" (Picture posted of a young black man in sweat pants and a jersey, running down the street, obviously jogging.)

People reply to these posts, mostly, with such terror and paranoia that you would think this neighborhood, instead of being one of the most boring and safest in the entire nation, was a literal war zone. They'll say things like, "I never answer the door unless I'm expecting a family member! You can't be too careful!"

Or: "Yes! Call the police! He's probably running away from them!"

Occasionally someone will post something like, "I think people on here are just a little paranoid," but that meets with screechy rebuttals about how "crime is out of control!" and "My friend's cousin just got her lawn decorations stolen by someone JUST LIKE that man!"

Lawn decorations. I kid you not. It was a cement pig, for those who are curious.

The part where people find and return one another's dogs is nice. But otherwise, jeez, all this app is doing is making me think less of my neighbors.

Labels: my neighborhood, Next door


It's almost spring break, which means -- you guessed it! -- more reading time!

Though we're also planning a trip to Crystal Bridges and also a hiking trip.

This is an excellent examination of both the terrible influenza that killed somewhere around fifty million people in 1918-1919, and of the doctors whose research helped stop the pandemic.

It's very methodical -- by which I mean it takes its time even getting to the pandemic -- but Barry tells us essentially everything. The information on the state of medical training / research at the end of the 19th and early 20th century is excellent; and the information about the pandemic itself is also very good.


Rod Dreher is still a snowflake. See also this one. Apparently little girls in social justice teeshirts trigger you, if you're a modern conservative.

My teeth are pretty awful anyway, since I grew up in Louisiana, which (at least then) did not fluoridate its drinking water. So I got billions of cavities. Having so many fillings means my teeth are easy to break.

I'm going in tomorrow to have the break assessed. I'm expecting to need a crown. More money on medical costs, in other words.

On the other hand, I'm writing pretty steadily again. So that's good.

Next week is Spring Break, and the week after that, Passover begins on Friday. The kid will be home for both of these. Something to look forward to!

Here's some of their latest art: 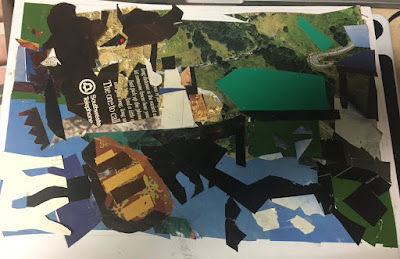 Labels: The Kid, Whining about my health

Writing and the Weather


The weather here in Arkansas has been all over the spectrum -- we have 80 degree days one day, and two days later it's 30 degrees and sleeting.

My favorite writing weather is snowy and cold. I bury myself in my writing chair under a giant duvet, drink coffee, and write. The cats sleep on my feet. The dog curls up on the sofa where he can keep an eye on me. The day rolls wonderfully on.

This winter, though, we had no snow, and no long stretches of cold weather. More than once, we've had to put the AC on at night in order to sleep -- this was in January and February. Plus, the lack of long cold stretches mean the bugs don't ever really die off.

Between this and the terrible flu and my new terrible schedule, I'm finding it hard to write productively.  I'm looking for a way to snap out of this slump.

One thing I'm trying is I now get do all my prep work and paperwork at school. This is easy to do, since I have three days on campus, most of which time is spent in my office -- not teaching, I mean. (I can't go home since Dr. Skull and I have only one car, and he's almost always at work on these days. He drops me off at 7:00 a.m. and picks me up at 4:00.)

Another thing I'm trying is to just write SOMETHING every day, even if it's just a paragraph.

I need more strategies, though.


I am very nearly recovered from that horrible flu, but very nearly ain't 100%. All y'all stay well out there.

Have some links for your Saturday:

I am too amused

Yet another way Trump is destroying the country

This is the new favorite argument from the alt.right -- and it's entirely incorrect, as anyone who knows anything about the Holocaust actually knows

Long read, but excellent, on why the alt.right racists are wrong about their IQ "science."