Like many people with any sort of empathy or any sense of justice, I'm having a rough week. Some of my students have asked me how we can vote the GOP out of the Senate and the House. Sadly, in Arkansas our options are limited -- we don't have a senator up for election, and only one of our House Reps is up for re-election. Still, we do what we can.

Meanwhile, have some links:

If you need to know more about your own elections, this is a useful site.

"I wondered why, if what girls had between their legs needed to be so closely guarded, we were the ones to wear skirts."

Art for our time

The future of space travel 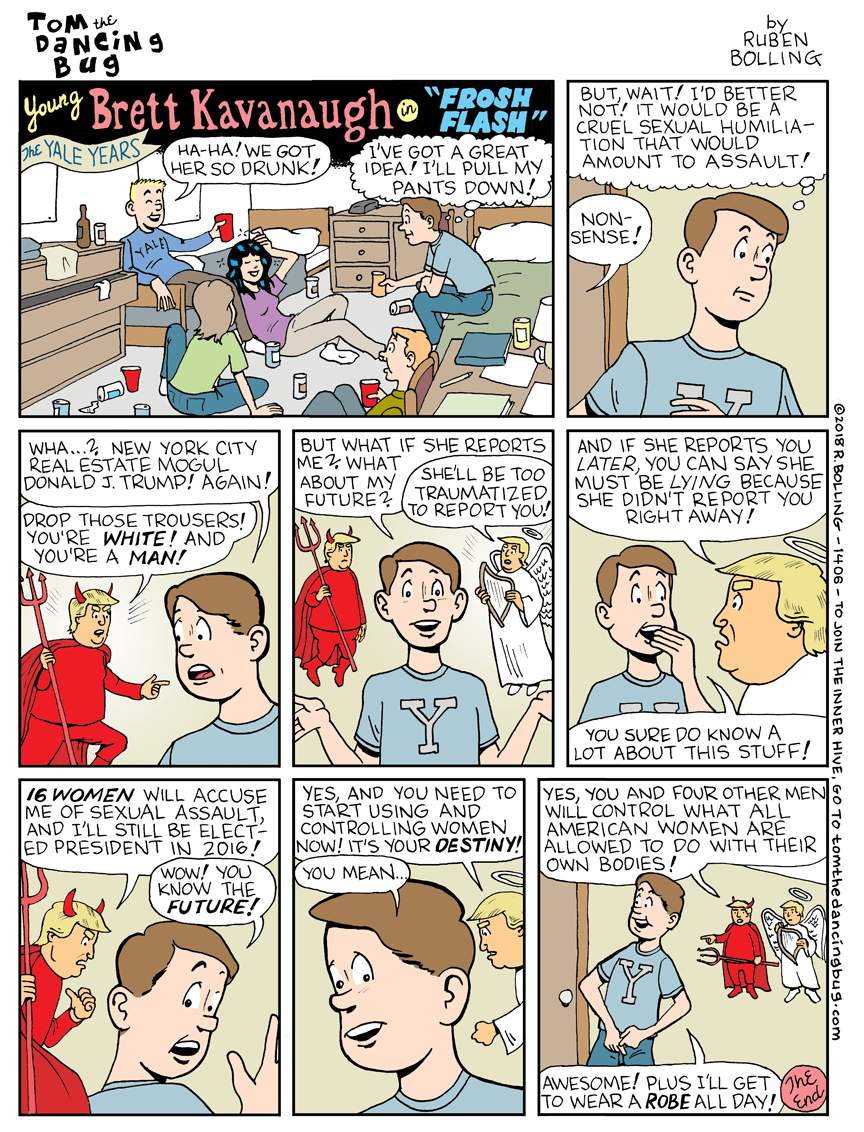 And this is nice

Posted by delagar at 1:29 PM No comments:


So, like many of you, I've been dealing with the GOP and their fawning worship of Kavanaugh.

A black man who gets angry when he is accused and shouts or screams? And so the police shoot him down? Why, what else did he expect?

A woman who dares -- ever -- to shout and scream and cry when accused? Or, hey, when she's being examined as a witness? Hysterical bitch who can't be trusted in power.

Children who cry or scream? They need a beating, obviously. They need to be put in their place.

But a white privileged straight guy who screams and threatens and cries in rage? Hey, that guy is amazing. That guy deserves a seat on the court that will decide the fate of every woman and child in the nation. That guy is a hero.

Why are conservatives -- especially religious conservatives -- reacting this way? It seems pretty clear to me. They love angry daddys who will punish bad children and keep those bad children in their place. They worship hierarchy, that Great Chain of Being, and they want Angry Daddy to keep everyone -- especially those brown and LGBT and girly people -- in their places.

This mystifies those of us who are interested in equality and justice. We don't want a country where one set of people (rich white straight men and their near kin) are treated with respect and given rights, while everyone else is abused and mistreated. We want what we were promised -- a more equal country, liberty and justice for all.

And so when we see the conservatives fawning and squeeing over someone who opposes all of that, especially when they're doing so because he pitched a tantrum, well, yes, we find those conservatives pretty deplorable.

What can you do? Nicole & Maggie have some suggestions.

-- If you are a humanities professor, you say something that is clearly pleasure-reading, but at least vaguely cerebral. Witty mysteries about British academics are good, or the sort of science fiction that doesn't have aliens on the cover.


-- If you are a university administrator, you say that you are reading the university Common Reading book, or something by one of the writers who will be visiting for the Writers' Symposium in October. Either way, it is very interesting and you are enjoying it very much.


What is up with reliable scholars and otherwise intelligent people who cite The Daily Mail like it's a reliable source?

Is this ignorance, or is it malicious? (Why not both!)


So I'm teaching a course in World Science Fiction next semester.

These are the books I'm making them buy:

I'm also having them read a couple of online manga/webcomics (not the entire series, just chapters) and showing them a couple of movies. The movies aren't decided yet, but I'm thinking Snowpiercer and Train to Busan might be among them.

Thoughts? I'm especially up for short story and movie reccs.


Being so sick for so long meant I had very little strength to do anything. Even watching media took too much out of me -- I could watch about half an episode of something like Brooklyn 99, for instance, and then I would be too exhausted to continue, and have to go lie down for awhile.

On the other hand, somehow reading wasn't exhausting at all. So I've read a lot over the past few weeks. These are the new books I read and finished. (I reread a lot of old books -- Connie Willis's Passage, for instance, which is excellent; and Middlemarch for about the 10th time, but I won't include those.)

This is a re-issue of a book published originally in 2000, which I didn't know when I picked it up. It's pretty much nothing like the sort of book I usually like, since DeWitt is playing with form and voice and structure, while my usual favorite books are straight-ahead narratives.

But I highly recommend this one. Despite the structural games, DeWitt never loses the reader, and despite the somewhat standard plot (boy searching for his father), the book is never less than fascinating. This is accomplished mostly through voice, I think -- we really like DeWitt's two main characters, and we never get tired of listening to them. It's also a real page-turner. I was caught from the opening pages, and despite being too ill to walk across the room, stayed up very late both days that I was reading this.

It's a big fat book, too, so if you like long narratives, that's another plus.

These are two of Lewis's lesser novels, one of which I had never read entirely, and the other I had never read at all. They're typical later Lewis -- a bored upper middle-class man and his marital troubles. World So Wide takes us to Italy, and it's readable but nothing much happens. Cass Timberlane is about being married in the Midwest in 1940. It's the better book, but neither is Lewis at his best. Recommended only for enormous Sinclair Lewis fans.

This is the sequel to MRK's The Calculating Stars, which I liked a good deal. I expected to like this one even more, given the buzz around the interwebs about it, but in fact I didn't enjoy it nearly as much. MRK goes heavy on the science detail here, which isn't bad exactly, and probably some people will like it. Lots of  minute detail about what an astronaut would say to another astronaut while establish orbit, data like that.

It's not bad that all this detail is included, but it left less room for developing characters and scenes between the characters. I could have used more of that and less of the authentic detailing of astronaut business.

I'm hoping for a third book, though -- get us to Mars. Show us what settling the planet might be like.

Laurie King writes the Sherlock Holmes series I like, about the elderly Sherlock Holmes and his young woman partner, which starts with The Beekeeper's Apprentice. I do love that series, and if you haven't read it yet, it's so much fun.

This is an entirely different sort of book, and also a lot of fun -- though it gets grim in the middle, so be warned. It's about a post-apocalyptic world in which most men have died out, due to some sort of sex-linked virus. Women run the surviving world, and men are heavily protected (for their own good!). The main character is a young woman, Dian, who scouts and travels for her family, along with her pack of dogs. The best part is probably the relationship between Dian and these dogs. I'd read a sequel (there isn't one, sadly) just to spend more time with the dogs.

But it's also a great post-apocalyptic novel, for all y'all who (like me) love such things. Recommended!

I love John Varley, especially his older books -- the stories and novels set in the Eight Worlds universe. So when this one showed up in my reccs, I bought it.

It's not a bad book. Very readable, as all Varley's books are. But it's just Steel Beach rehashed. Meh.

Posted by delagar at 1:12 PM No comments:

New Posts at Cooking with delagar


I've put up two new posts over at Cooking with delagar -- both of them student-level cheap meals.

These are mainly for the Kid, who is living in their first apartment this semester, but all y'all who are as broke as I am might like them too!

Posted by delagar at 4:31 PM No comments:


As I'm still recovering from that bout of illness, I'm pleased to have this long weekend.

By the way, if your stomach flu lasts longer than 24 hours, you should seek medical attention at once. #ThingsILearnedTooLate

I didn't go for over two weeks, because I'd always gotten better on my own before, so why wouldn't I this time? Also because my insurance deductible is so high, I hate to use my health insurance at all.

So by the time I finally went to the doctor,  I was so seriously dehydrated that I gave myself an acute kidney injury. It looks like I'm going to recover and my kidneys are also -- slowly -- beginning to recover. But it was a near thing.

For profit health care is the best. (Sarc, in case you were confused.)