A Haitian cab driver told him so.

"I am not a crackpot," Rod Dreher says.

And the comments on this post.  Holy hell, if you will pardon my pun.  My favorite is the fella who knows demons are real because when his daughter was little there was this little girl who came over to play with his daughter, see.

And she was wearing this sweater.  And orange sweater.  With yellow markings.  And without even looking it up on the internet he just knew that was a demonic sweater. Something's not right about that girl, he told his wife.  And sure enough later he heard these growling noises coming from inside the girl...long story short, now his daughter is all grown up and has all sorts of problems, like anorexic, and it's because of the demonic influence of this demonic devil worshipping child they were so foolish as to let their child come into contact with at that demonic public school.

Let this be a warning to you!  HOME SCHOOL RULES!

I have just realized it is only three weeks until Fall 2015 starts.

This cannot be true.

I am teaching two reading intensive classes, starting in three weeks, and I have read exactly zero books for either of them.

Also, I don't have any of the kid's school supplies.  Except two pairs of jeans, and her shoes.

I am a giant squid of AAAARGH!!!

(I did write several short stories this summer, though, plus I revised and submitted a novel. SO.)

Another Drawing By Our Favorite Artist


Our favorite up-and-coming artist just had her wisdom teeth out, and is now recovering, under opiates, which she is finding very pleasant.

But before that experience, she drew this:

I love the light and color best. She likes the hands.  Look at those hands!

I'm probably the last person on the planet to watch the TV show Numb3rs.

I just started watching it this past week, on Netflix, b/c I have been having my intermittent chronic insomnia and  needed something to watch late at night (like, two and three in the morning late) when I am simply unable to do actual work anymore.

Numb3rs is the perfect show for that.  It's smart enough to be interesting, and yet dumbed-down enough (the writers patiently over-explain everything for teh ijit American audience) that the exhausted brain can follow it.

New Member of the delagar Household


We have broke the 12-paw rule, and adopted a baby brother for Big Dog.

Here he is having a nap in the kid's bed after his many exertions on his first day at home: 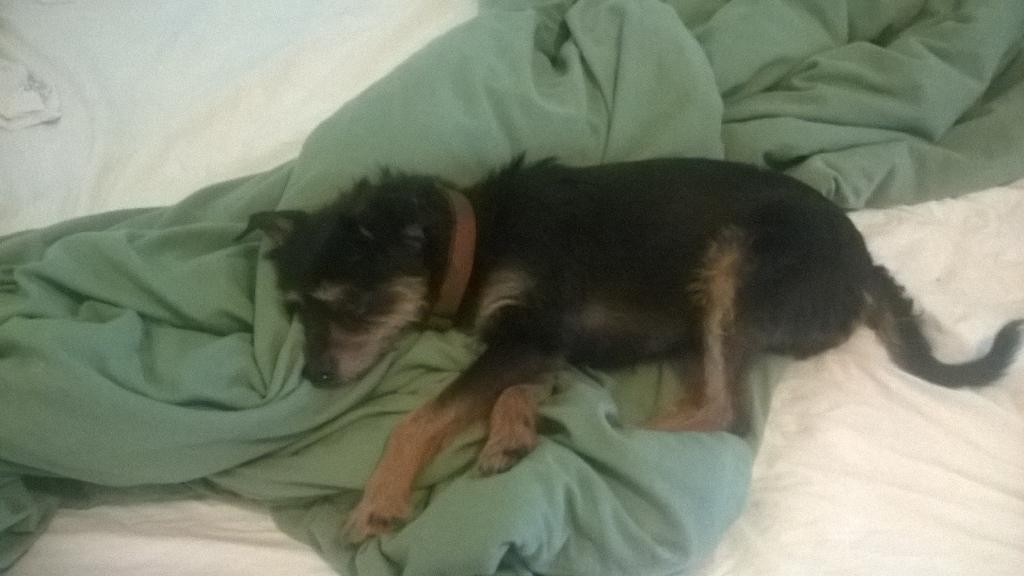 His name is Heywood Floyd.

He's four years old, and he's a rescue.  The cats are wary, but interested.  Big Dog is slightly appalled at our outlandish behavior, at least so far.

The kid is madly in love.

The Latest Comic From A Certain Kid


Which I'm linking B/c  it's great

But also pasting in.

It's not the comic she's currently working on; it's the one she'll do after Two-Faced.

How (Some) Men Handle Women Who Talk Back


Also: Why Arguing with (Many) Conservatives on the Internet is useless.

One of my ex-students has this history of posting kind of terrible memes. Racist memes, I mean. The thing is, she's not a terrible human being. I've had her in several classes, and we've gotten to know one another -- as you do -- not on a personal level, because she's my student; but on more than a superficial level.

I know she's not the person these memes suggest she is. Not to mention, she often posts sane and even social justicy memes and comments as well! Also, now and then, when I feel up to it, I will challenge her gently in comments; and frequently she responds well to these challenges.

But this afternoon.  Yikes.

She posted yet another meme, this one about that flag.

The story that went with it: Al Sharpton Demands Kid Rock Stop Using That Flag.

A gentleman, who, as it developed as the comment stream ran on, was her son, made a comment.  Not just a sort-of racist comment, but an appalling racist comment. (I am changing the names, because this is a student / ex-student.)

Dude: I'd tell that nigger to suck my dick on national television, then and only then I would consider it.

To which I replied, addressing not him but my student -- I did not at this point realize Dude was her son:

Me: Nice friends you have, Ellie. And tell me again that there's nothing racist about that flag. Please.

Ellie: It is freedom of speech. No matter how racist.

After which I went on a bit of a rant:

Free speech is not just the *right* to speak. It is the *responsibility* to evaluate the speech of ourselves and others, and to speak up when we see bad ideas being put forth; and to promote good ideas.

Otherwise, the marketplace of ideas fails, and free speech is worthless.

At this point, Dude reappears:

Dude: What ever. Those who think they are high and mighty are often mistaken.

Me: Dude, whatever you mean by that, there can be no mistake about your first comment on this thread. It is racist and homophobic and hateful, and you should be ashamed that you made it.

Dude: I'm not ashamed of anything I say because I know I can get a rise out of people like you

(Charmingly, he added this meme:

Me: Ellie, when you share memes like this? Dude is the sort of person you sound like. He's who people think you are. Maybe you should think about that.

Dude: And I think your a snobby bitch who needs the dust knocked off her pussy and the stick removed from her ass.

At this point (a) Ellie intervened to call Dude out as her son; and I quit responding, both because Dude was her kid, and because once asshats start getting abusive, there's really no point.

BUT.  Dude did not quit.  He escalated, in fact, posting over the next several minutes about a dozen abusive posts and memes, most of them filled with racist, sexist, and homophobic language.

Just a few of the memes he posted:

When I left FB, he was still posting horrible comments and memes. The anger, I'm more than 75% certain, arose from my daring to challenge him -- to talk back.  And you will notice that his first response was to promise sexual violence against me.

There are your Conservatives, folks. Family values and morals my back teeth.

I guess this is actually an author review.

I discovered Naomi Kritzer entirely by happenstance.  I was killing time on Twitter, so I wouldn't actually have to write this scene in my horrible novel, which had been galling me raw all morning, and I came across someone (I have no idea now who) recommending her story in Clarksword.

If you haven't read it yet, go do so now.  I immediately fell deeply in love, not just with the story, but with Kritzer, and began hunting out everything by her I could find. Which -- spoilers -- is how I operate.

If it's how you operate as well, here's Naomi Kritzer's homepage to help you out.

What do I love about Kritzer's fiction?

(1) So many women protagonists.

(3) Such physical writing -- flavors, scents, details about landscapes and clothing and how the world feels.

(5) And yet! Complex and complicated ideas.  Nothing is simple or simple-minded here.

(6) Animals.  I loved how the animals are characters, too.

(9) Character who learn, and are allowed to learn, from their mistakes.  This is great.  This means we get characters who can be wrong, who can learn better and do better. I'm thinking of the trilogy (which I highly recommend) that starts with Freedom's Sisters, but it's true in other examples of Kritzer's works as well.

(10) Kritzer always starts with the ghost pigs.  Not a wasted word.

In summary, what are you waiting for?  Go and read!

I Guess I'm Gonna Talk About That Flag

I don't glower with contempt and hatred when I see people with that flag on the bumper of their trucks, or stitched to their jackets, or even flying in their yards.

From the time I was about fifteen, until I was well old enough to know better, I too thought the Civil War was fought over States Rights. I also would argue (with anyone foolish enough to try to set me straight) about how many Southerners owned slaves, and how the North was just as bad, and what happened to Atlanta, and Reconstruction, and how that flag stood for pride in the South, and nothing else.

And the thing is, I believed all of this. I knew all this was the real history, the stone truth,

That was all that happened. She very politely did not call me out.  She didn't ask why someone like me, someone she knew was intelligent and well-read and ought to know better had a symbol of racism and racist hate on the notebook which was filled with notes for her class.  She said nothing at all.

I was made uneasy, though.  Uneasy enough to start thinking about whether people who had, for years now, been arguing with me about the role of the South in that war might, well, might --

It was a fracture.  It was a crack in my stubborn, thick-headed certainty that I was right.

And all y'all know what they say about cracks -- they let the light in.

I started reading with more of an open mind.  I started listening to other voices.

I took the flag off my wall.

So when people -- my students, my fellow Southerners -- argue with me, in their ignorance, about what that flag means, I don't hold them in contempt.  I don't hate them.

It's no sin to be ignorant.  But I think it is, perhaps, once the path has been shown to you, a sin to stay willfully ignorant.

Strictly of a personal nature this time -- a second summer class opened up, so now I'm teaching a Comp II in Summer II.

A little less time to write, but that's a trade-off I can live with.

I don't mind saying, this issue of Crossed Genres was a ride.

For those of you who aren't in the business, novelettes are a hard sell.  Not too many places publish them; so when writers find a place that does, it's WOO-HOO and HOT DIGGITY!

But here!  These novelettes!  So great!

Joanne Rixon, who is our Spotlight Author, gives us Elegy for the Green Earthrise, a wonderful story (okay, they're all wonderful, but I'm not sure I'll be able not to say so) about our transhuman future.

Lynn Kilmore, with By The Numbers, gives us a fresh take on the first encounter.

L. S. Johnson writes about Little Men with Knives -- another wonderful story, about a working class woman who gets a little help from an unexpected quarter.