Anyway, this revision is done.

Submitted to teh departmental committee.

Now they look at it and tell me if I need to revise more.

I still think a Cage Match would be a better plan.

But My Teacher Said This Wooden Nickel Was Perfectly Good!

So this is a topic I've been mulling over for some time, while reading around on Evangelical blogs / Far-Right blogs, as I like to do, and while reading Comp I papers (I have two sections this semester).

"Why do you read that junk?" my kid asks me, speaking of the Evangelical / Far Right blogs, not of my students' papers. "Do you just like to get angry?"

Though in truth these blogs only very seldom make me angry -- I mean sometimes they do, as when Vox Day says* that women should be shot in the head as a lesson to keep other women from seeking an education, for the good of the species, don't you know.  Though even then, I don't know, I was more amazed than angry.

But for the most part these blogs are so far away from any reality I recognize to anger me.  It's like reading about some bizarre cult arguing over their bizarre belief systems.  "Wow," I keep thinking.  "How odd.  How strange would it be to live like that."

Or, you know, it would be like that, if these cultures weren't (in fact) raising up some serious portion of my students, and sending them to my classes.  And then I have to deal with students who have been taught, in their history and science classes, that the world is 6000 years old; I have to teach History of the English Language to students who think the Garden of Eden is a real place, and that the Tower of Babel was a real event; I have to teach critical thinking and evaluating sources to students who think this is an example of reasoning:


“Jesus professed to work miracles; he cannot by possibility have been deceived on the subject; and so, either he did work miracles, or he was a bad man. Against his character all the objections to miracles must shatter, like surf against the rock. And this is not arguing in a circle; not proving the miracles by Christ, and Christ by the miracles. The concurrence of the two makes it easy to account for both; the denial of the miracles necessitates conclusions more improbable than the miraculous” (Broadus, Preparation and Delivery, p. 183).

And when I try (gently, because it is not my role nor my desire to destroy their faith) to point out the problems with their logic, they stare at me with round eyes. Or worse, furious eyes.  They don't believe that I know what I'm talking about, because (a) that's not what their pastor or their teacher back at their Christian academy said and (b) logic and fact have nothing to do with the truth anyway.

(See Rod Dreher here, for instance.  As far as I can tell, this is what he is arguing.  Though, bless his heart, it's an incoherent post, and in fact, I think what he means is we just can't base our religious conclusions on evidence.)

Except I'm not teaching religion, I'm teaching the ability to reason and evaluate evidence.

And therein lies the rub.  Students raised in this Evangelical / Far-Right culture, taught in these Christian schools, have been taught a certain kind of reasoning.

But when they try to use these wooden nickels among the larger world, outside the closed circle of Evangelicals, they'll find them refused, even laughed at.  And when I (gently) point out that they are trying to trade in wooden nickels it is often (sadly) not those who filled their pockets with wooden nickels that my students are angry with.

They're angry at me, for trying to give them real nickels, actual tender they can use to trade in the market place of ideas.

Not always, of course.  Some students are glad to get what I'm glad to hand on (having been given it by my professors, because that's how it works, here in the groves of the Academy).

But far too often, I see them months or years later on Facebook, relentlessly posting crap about how the government is going to force you to wear a chip in your skull if you buy Obamacare; or how if you let your child get vaccinated even one time, he will get cancer, it's been proved! or how the pledge has been taken out of schools by the liberal media because it has the word God in it repost this 1000X to bring God back to America before its too late!!!

And raising up kids, who they will send to the same Christian school they attended, or -- these days, because they are all so poor -- home school, and in fifteen years, a new generation is launched.

I do believe that the arc of history will bend toward justice.  But with a better education system, I can't help believing we could get it to bend faster.

*I actually read Vox occasionally, but I'm not linking to him. This is pure spite on my part, because I know how much getting page hits means to him -- he blogs about how many hits he gets constantly.  He's like one of those guys who mentions how big his penis is, or how many babes he's bonked, every five minutes -- although, as a matter of fact, he does that too.

Because we all have TOO MUCH TIME

Here's a lovely time waster for you.

Can you finely and effectly deal with this please?

So last night after my Fiction Writing Workshop one of my best students stopped me and with a worried look in her eyes asked me the question I have been dreading since I was a tiny little graduate student: "Can you explain to me when it's right to use effect as a verb?  Because I just can't -- I've looked up the rules and I just don't get it."

"Also," she said, "the whole difference between affect and effect in general.  I'm just not sure I understand."

"No, no, I get those.  It's just affect and effect.  Well, also bring and take, but those aren't bothering me right now. But my history professor took off ten points on my midterm because I used affect as a verb when I should have used effect, he says, but I don't see what he means, even after looking it up," she hesitated.  "Anyway, if you could explain it."

I flung myself to my knees and exposed my utter failings and ignorance, which I find is the best tactic at this point.  "I have never been able to tell those apart either," I told her.  "I've looked the rule up a hundred times, it makes no sense to me.  Affect is usually a verb, and effect is usually a noun.  That's the rule I can remember.  But affect can be a noun in the psychological sense, and effect can be a verb if we're effecting a change.  I've memorized that," I confessed.  "To me, the words sound exactly the same and it's really hard for me to tell them apart."

She was nodding as she wrote this down.  "Okay."

"Maybe check your sentence and see if that's the sense you were using it in?" I said.  "But affect the other way -- affect with an a -- also seems to me to be really close to effect with an e.  The bad weather affected the crops.  How is that different from effected a change?  Congress hoped to effect the economy with the stimulus?  I can't see a difference."

She was nodding and writing.

"And a lot of these rules," I added, "you have to remember, they're really just shibboleths."

"Rules made up as gate keepers.  Ways to separate the rabble from the upper class.  So the rules, they're deliberately bizarre like this, they're made impossible to understand. On purpose. They're meant to be something you're almost guaranteed to get wrong.  That way we can keep you outside of the gate, if we want to badly enough.  Like literacy tests, for voting?"

She had looked up from her notebook, her expression gone still.

Stuff I Am Doing

In lieu of an actual post, here is stuff I am doing:

Maybe someday I will actually write a real blog post again.  It could happen!

Grading midterms, I have come across my first case of plagiarism.

It is always so disheartening.

And always so infuriating, because WTF -- it's like they don't even try hard.

"How will you know if we plagiarize?" a kid asked me before the exam, whereupon I shot him a pitying look.

"Son," I said, "I've been teaching 26 years.  I know what a freshman level essay exam looks like by this point.  Believe me."

In Which I Steal An Idea From NicoleandMaggie: Ten Books

So over at Grumpy Rumblings, Nicole and Maggie have put up a post in which they discuss some book I have not read, and the author's claim that you can tell him by his books.

And then list (each of them) their ten favorite books to not just read, but re-read.

Since apparently I am going to be broken from this whole promotion portfolio full-court press for a while (I am starting to think I might never recover) I am stealing this idea.

As on Nicole & Maggie's page, y'all should feel free to put your your ten in the comments -- or on your own blogs!

My go-to books for re-reading: 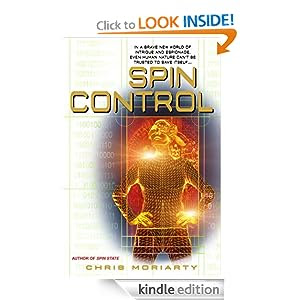 10. The Grapes of Wrath, John Steinbeck

Posted by delagar at 9:35 PM No comments:

I have put in the very last screen shot and bit of documentation and submitted it the departmental committee in charge of deciding if I did it right.

Here you see me and my colleague handing our portfolios in.  I'm on the left, OF COURSE.

A local magazine did an interview.

The Future of Science Fiction.
Posted by delagar at 11:07 AM No comments: