I'm teaching Station Eleven in my Comp II class this semester, which means I'm re-reading it assiduously.  It's really well done. It does concern a pandemic that wipes out 99.99% of the population, so if that's too much for you, then maybe skip it. But the writing and the characters are great.

The structure, which moves back and forth through time, is a little much for some of my students, who declare themselves confused. Others say it's "boring," since (I gather) there is very little violence, rape, or murder. "Nothing happens except people talking," one student declares. This reminds me of a criticism I saw recently of Jane Austen, which is that her books are boring because all people do is visit one another's houses.

Anyway: there is also a mini-series, now showing on HBO Max. I bought a trial subscription so I could watch it, and kind of wish I had not. Most reviewers seem to like the series, and it does have charming moments, but it also eviscerates everything that is powerful about the book.

They take Hamlet as the ur-text for the series, rather than King Lear, which undercuts Arthur's role in the story; and they redeem the prophet, which is a terrible move.

In the book, he is a religious leader who "marries" every young girl he comes across, and has as his end goal the destruction of the few humans who remain. In the series, he kidnaps children from their parents, building a child army, some of whom he convinces to be suicide bombers. And then the series redeems him, since he is, after all, just a misunderstood. traumatized boy.

In the book, he is also a traumatized boy -- Kirsten thinks that about him, after his death, how like she herself he grew up in the first years after the pandemic, and must have had terrible things happen to him, just as she did -- but this is not excused. He may be traumatized, but he is still doing evil, and that evil is acknowledged.

The series makes him Hamlet. No. Just no.

Anyway, I enjoyed watching the series, but it is like a C+ television show, whereas the book is a masterpiece. Read that, and only watch the series if you're really, really bored, or a completist like me.

Angry Stephen Colbert is being very mean to me! DO NOT RETWEAT! pic.twitter.com/Ipjw3uxjyE

I'm teaching Introduction to Global Literature in the spring, and would like to move away from the anthology-based model. (I've used anthologies in the past, but I usually don't like the translations or the selection available.)

The way "global literature" is defined at my university is "any literature which is not American literature." This is because we also have a two-semester American Lit class, so students get that there.

Anyway, this is my tentative reading list at this point. I'm also going to add in some works that are available for free online -- Catullus, for example, and maybe Iphigenia at Aulis.

What I'm looking for is suggestions to add to the list, so if you see something I've missed, please comment! 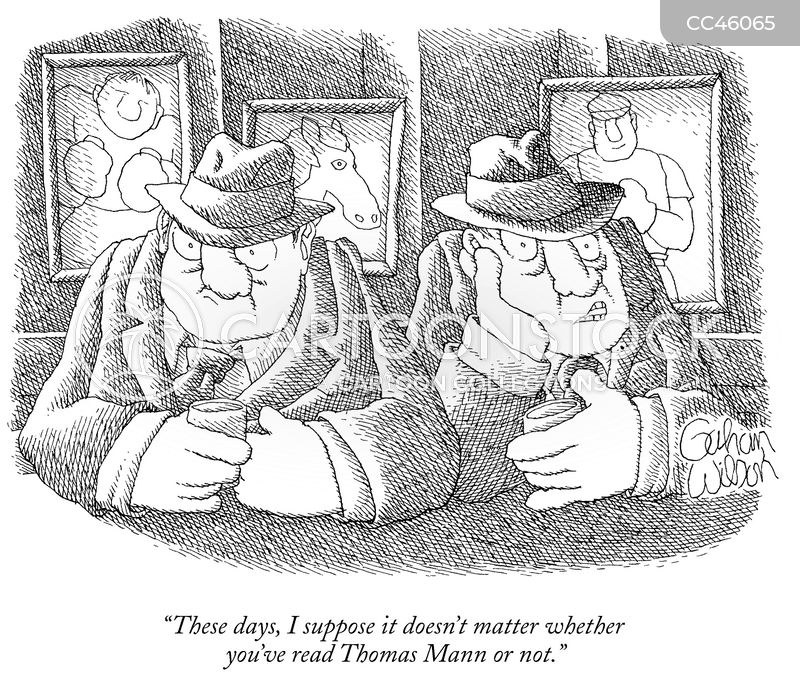 I walked a mile without stopping today, ate some chicken and potatoes for dinner, and have not felt like passing out even once. Maybe I'ma live.

Also I read a book that wasn't Angela Thirkell -- A Marvelous Light, by Freya Marske. It's set in a fantasy Edwardian England, and has a secret cabal of magicians who run (I think?) the British government, also a M/M romance as the main characters.

There's a certain amount of graphic violence and abuse, not between the two main characters, but visited upon one of them by his sadistic and creepy family. Also some really (really, really) graphic sex. And I'm made a little uneasy by that secret cabal, since that always makes me think of The Protocols of the Elders of Zion. I'm probably too touchy on that point.

A good read, though, and the first in a trilogy. Also I liked Robin's secretary a lot -- more about her please. 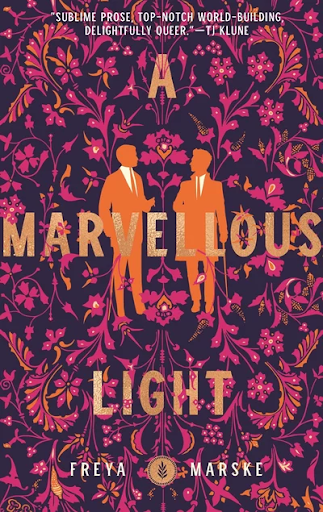 I'll admit I only tried to read Jonathan Franzen once, and found his work boring and overwritten, but this does not make me want to give him another chance. 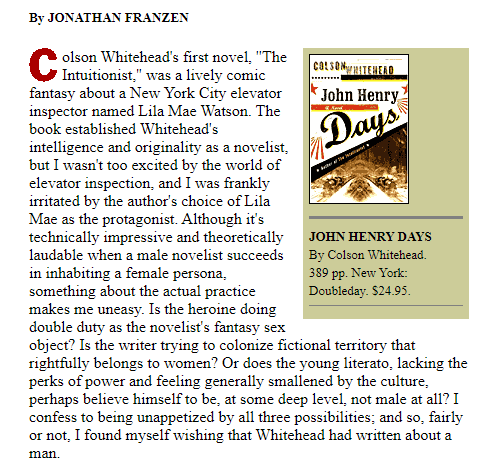 Colson Whitehead, on the other hand, is brilliant. Start with the Underground Railroad, or with Sag Harbor if you prefer more traditional fiction. Zone One if you like books about zombies.
Posted by delagar at 10:48 AM No comments:

I am beginning to think I might recover from whatever that intestinal illness was. I'm still too weak to walk a mile comfortably -- I have to keep stopping to breathe and wonder if I'm going to faint -- but my mental acumen is better.

During the worst of the illness, I couldn't eat and I couldn't sleep. The combination of these two made me completely stupid. I couldn't do my word puzzles, I couldn't do French on Duolingo without making dozens of mistakes on every lesson (I got the "comfort owl," assuring me that he believed in me and that it was okay to make mistakes), I couldn't read anything except old Angela Thirkell novels. It was very unpleasant.

I am recovering though. Did Wordl in 4/6 today, and have been writing at least 500 words a day for the past three days. Also yesterday I ate almost a regular meal: a cheese sandwich, some canned pears, and half a banana.

About an inch of snow left on the ground, steadily melting. I am having my first coffee in about four days (stop drinking during the whatever-it-was illness).

Snow and the Fox

It's snowing heavily here -- a "thick band of snow is funneling through the River Valley," to quote the weather guy. About two inches so far.

I was just out with the dog and the fox went trotting across the yard, paused to stand looking at me intently, and then trotted on again. Snow was caught in her thick winter coat. Very beautiful.

Meanwhile, our university has "pivoted" to remote for the next ten days. I hate remote delivery with a passion, but given how many of our students got/were exposed to Covid in the first few days of class, I can see why we're doing it.

I don't have Covid, but I do have something -- I think maybe a food allergy? Food intolerance? Lots of vomiting and gut pain, and a total lack of appetite. Anyway, I'm glad for the chance to work from home for a while.

Posted by delagar at 4:57 PM No comments:

An Interview with Me!

Gareth Jelley at Intermultiversal did an interview with me a little bit ago, and now it's been published.

You can read it here!

I really liked the questions that were asked in this one.

One main thread that runs through my work, I think, is the abuse of power, and the way in which those with power seek to force the powerless to not just accept, but to participate in this abuse. It’s not enough that we’re serfs to the hyper-wealthy—we have to celebrate our serfdom. We’re forced into this by not just physical abuse but emotional manipulation. We are compelled to love our oppressors. 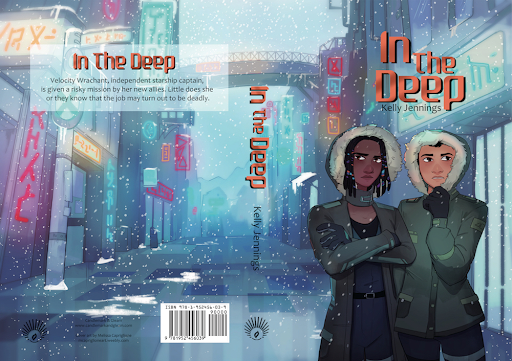 Perhaps you have seen these strange posts all over Twitter and FB:

They are for an online game called Wordl, which I admit is a lot of fun.

If one wordl a day is insufficient, there is also Absurdle

Posted by delagar at 2:00 PM No comments:

But as someone in the comment stream notes, the end game is to have only one "public culture," which is the white nationalist "Christian" culture, and to define every other way of living and thinking as evil -- pornography, as their current term of choice.

This is why we can't tolerate their intolerance. 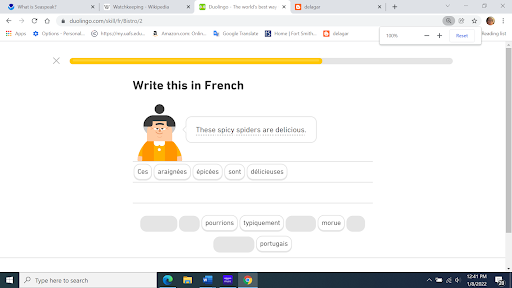 Posted by delagar at 1:41 PM No comments:

The deliberately ignorant crapsack from my earlier post has what sounds like Covid. "What can I learn from this?" she howls.

I'll give long odds she learns absolutely nothing. If she had been someone who could learn from facts and experience, she wouldn't be a MAGA crapsack.

(As usual, the comments are a treat. Her readers assure her it's flu, or allergies, or strep -- anything but Covid; or that it's a plot by China or Fauci or Biden to kill us all; or that she should just take Zinc and Vitamin D, and other quack "cures". Oh, and also there's the usual "joke" about throwing liberals out of helicopters, ha ha ha, that one never gets old.)

Posted by delagar at 1:01 PM No comments:

Well, that should solve the problem

The Arkansas Department of Health announced that they will no longer conduct contact tracing for individuals aged 18 and older.

There was some talk like we might do virtual for the first week or so, but nah.

At least we have a mask mandate, I guess. 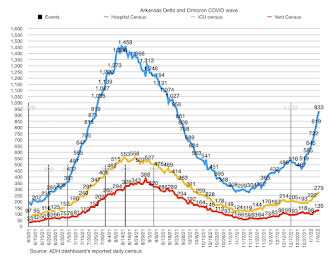 Posted by delagar at 6:08 PM No comments:

Update on the Kid

Today the kid and his boyfriend both tested negative for Covid.

The boyfriend had relatively mild symptoms throughout -- a cough and a sore throat -- and the kid never had any symptoms. So yay for vax + booster!

Posted by delagar at 6:57 PM No comments:

I posted yesterday about the fella who believes that the teacher shortage (which is nationwide) is being caused by people getting shot in Chicago. Here, we have a post from a woman with hundreds if not thousands of followers who sincerely believes

(1) that Christianity will soon be illegal in the USA

The comments are equally bizarre. The obsession with apple pie in particular is pretty strange. I mean, I like pie too, but honestly it's just pie. It's not holy communion, which is how it's apparently being treated by this lot.

But here's my question: when 25% (more or less) of our country believes such blatant nonsense, what are the chances that we can convince them to start listening to facts, and to base their decisions on those facts? I mean, clearly a huge part of their identity hinges on swallowing down this absolute bullshit.

I lay this at the feet of Reagan, as with so many other ills corroding our country.

Meanwhile, Covid cases are surging here -- 7400 new cases yesterday, and 8 deaths -- but our locals are still insisting that not getting vaccinated is their "right," as is their refusal to isolate or wear masks.

I'm currently reading Patient Zero, which is about historical epidemics and pandemics, and I'm here to tell you that this determined ignorance is nothing new. Polio was almost eradicated, but some religious zealots decided the vaccine was imperialism, and now 500,000 kids a year in Africa get the disease. AIDS did the damage it did because "only those people" died from it. And cholera killed millions because people insisted on the "freedom" to dump their sewage into their drinking water.

To quote Dorothy Sayers, Some consideration for others is necessary in the communal life.

We're all on the boat together, after all.

This is your brain on Fox News

The kid's boyfriend has tested positive for Covid. Since he lives with the kid, there's no way for the kid not to be exposed. (The apartment is too small.) The other roommate moved out and is staying with friends.

The boyfriend has a mild case -- he was double-vaxxed. My kid is tripled vaxxed (both doses and a booster) so right now we're just hanging tight.