Something to Cheer Us Up


Here's a video to make you happy for hours & hours:

Posted by delagar at 2:43 PM No comments:


It's raining yet here in the Fort.

Over here on io9, read about all about us -- over 18 inches of rain so far this month, and you can play with a very cool graphic!

Before and After Pics of Arkansas River. 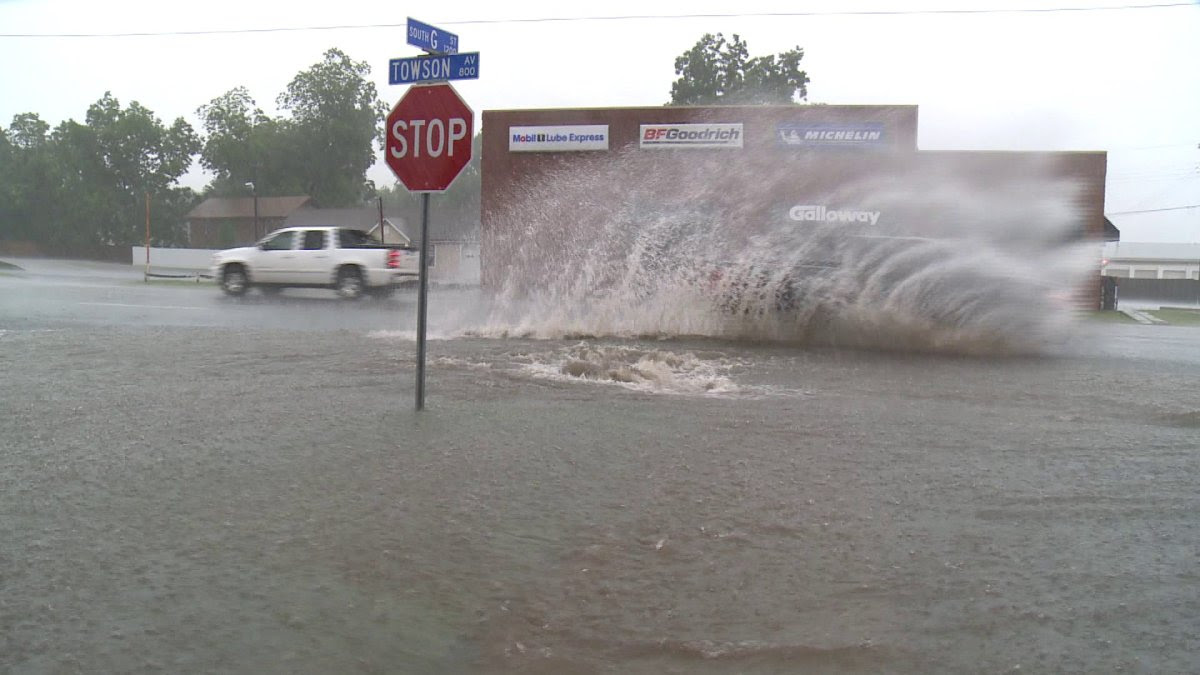 News from the Fort 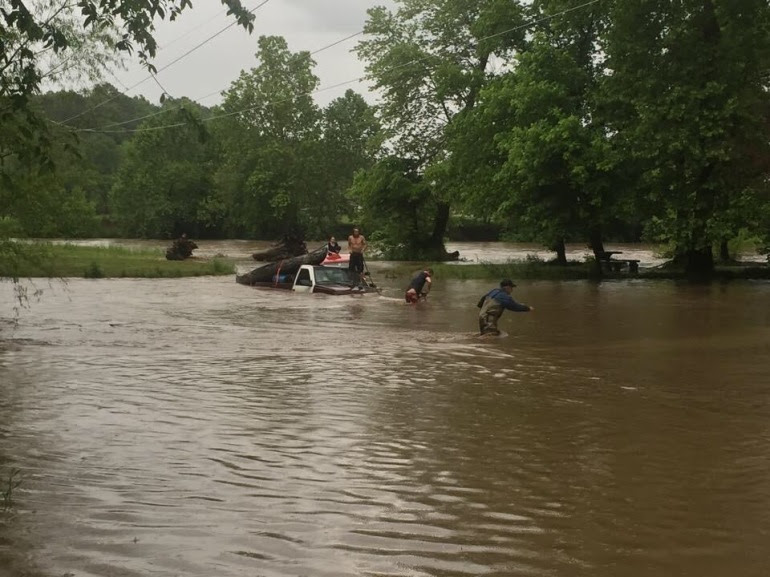 Our house is on the higher end of town, so
we're not likely to get flooded out; Northside of town, which is where the poor/ish folk live, that's the side of town that's at risk. The city has installed flood gates there.

These gates don't look so impressive to me, a citizen of New Orleans, but maybe they actually work.  It continues to rain torrentially.

Meanwhile! In non-weather-related news! Tomorrow is the last day of high school for my kid. "Do you want to go back to high school next year?" Dr. Skull asked her this morning, as they were getting ready to leave for school.

"What?" she said grumpily.

"Or would you rather stay home and be home schooled? Do you like high school?"

Monday is my first day of Summer Teaching.  Comp II.  Only one class, and I might not be teaching Summer II.  Less money, but also less work.  I'm trying to see the silver lining here, people.

Here are the vaunted flood gates: 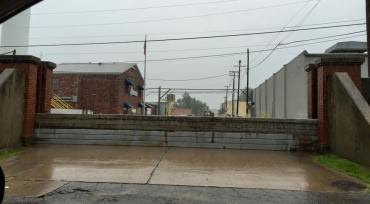 
I've blogged here a few times about Rod Dreher and his posts over at his blog.

Lately, as the Supreme Court has been reviewing the question of Marriage Equality, Dreher's been amping up his usual posts on how the "barbarians" -- that's his word, not mine -- of Liberal culture are going to destroy (Christian) America.

I add Christian there in parenthesis, because for Dreher, you don't need to add Christian; obviously Real America is Christian.  It's the barbarian American that is the fallen, and therefore Not-Real America.

Today he has another post -- this one about how important it is to Have That Talk to Your Kids, which basically boils down to, once again, Christians v. the Barbarians.

Not because I'm much concerned about Rod Dreher or his ilk.  As he himself recognizes, his (parochial and frankly exclusionary) culture has lost this battle. I like to read his blog, now and then, because -- though this may be difficult to believe! -- he is one of the more rational and least hateful of the Conservative bloggers; and because I like to read blogs from all over the political spectrum.  (I used to read Michelle Malkin, Ann Althouse, and RedState, but there's only so much misogyny and stupidity I can handle, okay?)

No, I'm writing this because, more and more on my FB page, I'm seeing posts show up expressing much the same sentiments as those Dreher expresses: that our country is in peril, specifically due to the gays and feminists and liberals and atheists*; that the barbarians are at the gates; that only by teaching your children to be soldiers for Jesus can we save America.

The obsession these posters have with (1) women (2) black people (c) atheists (d) immigrants (5) well,anyone at all except themselves is revealing.

And, of course, there is no sense that those people are American citizens, with equal rights, with agency, with lives like their own; that liberals too love America?  That black people also want good lives?  That LGBT people might also have a right to a life with the person they love, not to mention a family?


*Sometimes due to those black people wanting free stuff also.  Because black culture.  Like Rod Dreher, many of the people on my FB feed seem convinced that black culture is made up of young black men who are criminals and young black women who are having babies so they can be on welfare, and riots.  Oh, and they are all standing around demanding white people apologize for slavery, and give them free money.  THE END.

Just Bringing You Some Links


Yeah, I don't usually do link posts, but.

Here are some links, y'all!

Key graph: "Immortan Joe treats women as possessions, brood mares, and cows, yes, but he also treats young men as cannon fodder.  His "war boys" are literally that, children raised to desire nothing but violence, taught that a glorious death in battle will secure them immortality in Valhalla, either unfamiliar with or openly hostile to all soft emotions.  Much attention is paid to their traditions, all of which are designed to glorify both Joe and the boys' sacrifice of their bodies and sanity in the pursuit of his quest, but when Joe removes his favor, the war boys are revealed as what they are: empty children incapable of grasping the complexity of the world, clinging to fairy tales told to them by an uncaring parent.  The brilliance of the movie is less in telling a woman's story, and more in so baldly demonstrating how old men with power will use young men as their tools and weapons, by teaching them to hate and fear women."

Key graph: "[M]ake no mistake, during her years as a “conductor on the Underground Railroad,” Harriet Tubman was a thief who regularly stole the property of wealthy Maryland farmers. That was what the law said and what the Constitution said. She broke that law and took “property” that didn’t belong to her. We may not think of this as theft today because the “property” she stole was people — human beings, but the law at the time did not recognize those people to be people. The Constitution said they were property. And that made her, legally, a thief."

(3) From Mike The Mad Biologist: Apparently true, and hard to believe: Jade Helm.


(4) And our Crossed Genres Stories from this month!

The Corpsman's Tale, by Iain Ishbel -- Time Travel, but with Social Justice!

Let Down, Set Free, by Nino Cipri, a beautiful story about a woman who finds unexpected beauty and love in an unexpected alien place.

The Tragically Dead Girlfriend, by Kate Marshall -- subverting your tropes: what we do best at CG.


I have turned in my grades.  Summer Session I starts June I.

So I have -- let me count now -- two and a half weeks to call my own here, which I will spend catching up on reading and writing and (maybe) sleeping.  Sleep would be nice.

I am teaching Comp I in Summer I, which is essentially prep free at this point -- I do have to do some reading for my fall classes, but I've got most of the summer for that.

Summer II, I may well not be teaching at all.  Bad news so far as our finances go, but I am trying to look at it as a silver lining: more time to write.

Why will I not be teaching at all?  Why, because the voters of the Grate State of Arkansas elected charming Far-Right legislators to office, of course.  We don't need no education, and we ain't gettin none neither.

So less funding for higher ed this year, which means very few summer classes are possible.

And when I would begin to explain how the 2012 elections, see, had put these Tea Party state Republicans into office, and --

"Oh, I don't pay any attention to politics," they would interrupt me smugly.  Like this was a virtue.

"Yes, precisely," I said finally, to one of them.  "That's exactly what happens.  None of you pays any attention to politics, none of you votes, and so who does vote?

"Only the rabid conservative voters vote.  And so who gets elected?  The rabid far-right politicians.  And then we end up with those politicians in office, and they refuse to fund the universities.  And the libraries.  And the roads.  And everything except the prisons, and here we are."

This student stared at me, sort of helplessly, and I felt bad, since, after all, I had unloaded all my temper on her, and it was hardly all her fault.

I growled some sort of apology.

It's not like I voted when I was twenty either, after all.

Oh, well.  Back to my science fiction, where I can make the bad guys suffer, at least sometimes.