Rod Dreher writes yet another ridiculous post. This unhealthy obsession with LGBT people is really damaging his ability to reason.

In "Born That Way," Dreher argues that the rising number of young LGBT people means that those people aren't "really" gay. (Apparently it's a fad, or a lie, or a conspiracy by us powerful SJWs.)

I too have noticed a rise in people admitting to being LGBT among the younger generations. But it's pretty clear to me that this is all it is: more people are now willing to admit that they are LGBT.

These gay people, and trans people, and bisexual people, and Lesbians, and asexuals, and so on, were always with us. But the social stigma, up until literally the last decade, was so vicious and so strong that many fewer people were willing to admit, even on a survey, and certainly in public, to their true selves.

My kid argues that being straight is an invention, that straight people didn't even exist until some time in the 19th century. I'm about 90% in agreement with her. (I do know people who are 100% straight -- that is, who have never been attracted in the least to someone of their own sex.)

It's being rigidly heterosexual, in other words, which abnormal. And we can see that this is true by how fanatically societies have to police sex and gender in order to ensure that (most) of the population identifies as straight. Once that fanatical (and vicious) policing lapses, the real nature of sexuality in a population emerges. That's what we're seeing now.

But Rod Dreher was rigidly (and probably viciously) policed as a child, as were most of those in his comment section. The result? A neurotic horror of anyone and anything that is not oppressively heterosexual.

It's sad that these people are so damaged. But it's lovely that (most of) the younger generation is not. 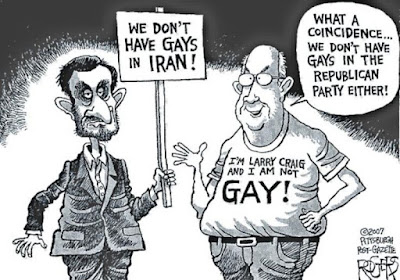