It's pouring rain here, with lots of thunder. This is the Arkansas weather I signed up for.

My health is much improved, and my appetite has come roaring back. God, it's good not to be queasy all the time.

Posted by delagar at 7:38 PM No comments:

Being Ill Not for the Weak


The antibiotics the doc put me on seem to be helping, but they have destroyed what little appetite I had left.

This, combined with having to drink first Gatorade and then Pedialyte, which are both really nasty, you will be interested to hear, means I'm having a hard time eating anything, even if it isn't nutritionally dense.

Also, I'm supposed to stay away from nutritionally dense things. "Simple carbs," the doc said. "No fiber. No dairy. Nothing that has a lot of fat. Not much protein. No sugar."

"Okay," I said, thinking through the sorts of things I eat, wondering what that left. "So... like rice?"

I'm thinking whether bagels would be simple carbs. But I've never eaten a bagel without cream cheese or at least butter.


Y'all, I've been deathly ill for the past two weeks. I think I picked up food poisoning at a restaurant, eating vegetable tempura that wasn't cooked sufficiently, but who knows.

I tried to gut it out (pun intended), but yesterday finally gave in and went to see my doctor. (This was after I couldn't walk across the campus to my class without stopping to rest on the way.)

My bp when the nurse took it was 90/50. This is caused by dehydration, in case you're curious.

Now I'm on two different antibiotics and have been ordered to drink Gatorade. I don't know if you've ever had Gatorade. Bleck, is my evaluation. But I am drinking it.


Shared by The Guardian:

Posted by delagar at 4:34 PM No comments:


Have some links for your Sunday!

This, OTOH, makes me want to kick things

Interesting though a bit gruesome

This is the future the liberals want

Banning burqas, or any other form of religious expression, is a terrible idea. Also it doesn't work. Also, don't @ me with your "but feminism!" argument because that is also bullshit.

This, however, is beautiful 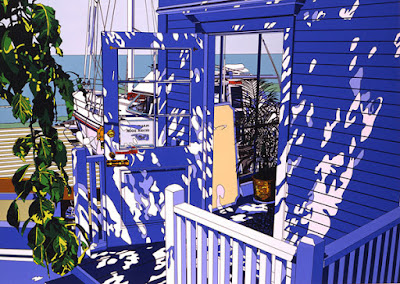 
Since my recent illness, I've had trouble eating. The thought of food makes me queasy, which means I don't eat until I'm really hungry. And then once I've eaten, almost everything I eat makes me even more queasy. (I've stopped vomiting but it's still pretty unpleasant.)

So I've been looking for food I can eat that will keep me from being hungry and yet won't make me ill. So far cheese is the biggest win, but also perfectly ripe bananas work, as well as some (very bland) yogurts.

But you see the problem. This is a very limited diet. So I've been stalking the stores, searching for food I can eat which will also provide me with more nutritional benefit than my current diet (though bananas are pretty good, nutritionally).

"Nutritionally dense is a made up term," the Kid seethes. I actually got it from the Kid, who learned it in health class in high school. "It's bullshit."

"I can't live on cheese forever," I say. "It's just not nutritionally dense enough."

"It's a ridiculous term! It was invented to make us feel terrible about what we're eating!"

"Peanut butter is nutritionally dense," I say, "but bread makes me queasy. I guess I could just eat peanut butter on its own."

"It's a term invented by the patriarchy to oppress women and control our lives!"

At this point I began laughing.

"What?" the Kid demanded.

"That's a good one," I said. "Excellent technique."

"You know exactly the argument to use against me."

The Kid is grinning now too. "It's true, though. The patriarchy --"

"Okay, okay. How about we find some food I can eat that isn't cheese? How would that be?"

"You should try ginger tea," the Kid says, heading for the tea and coffee aisle. "Or maybe ginger ale."

"Those don't sound very nutritionally dense," I say, and the Kid rounds on me. I laugh. "Now I'm just fucking with you," I point out.

Life in the delagar household.

Labels: life with the delagars, The Kid, Whining about my health

My Kid and also a link


You should stop by this post at Nicole and Maggie's blog for two reasons.

One, their excellent links on what you can do (this is a frequent feature at their blog -- just saying). We often feel, or at least I often feel, helpless in the face of this much corruption and evil, and N&M give us do-able things we can do to help stop the destruction.

Two, the tweet from Merriam-Webster about the word genderqueer.

Here's a self-portrait from my genderqueer Kid to go with:


After spending months at it now, I have reached the conclusion that it is useless to attempt an exchange of ideas with Trump supporters in the market place of ideas.

Here is what always happens:

Trump supporter: (Says something bizarre and obviously untrue, such as that schools in Oklahoma have banned the Pledge of Allegiance.)

Me: "I don't think that's true. I have several ex-students who teach in Oklahoma, and all their schools say the Pledge every morning."

Trump Supporter: "Well, I know it's true, because it happened at my friend's school! Where she teaches!"

Trump supporter: "And it's happening everywhere, because LIBERALS hate the flag!"

Me: "Do you have examples of the places where it is happening? I've just done a google search, and I don't see any reports of anything like that happening any reliable media sources."

Trump supporter: "What do you consider reliable? The New York Times? LIBERAL BIAS!"

Me: "Do you have a reliable source that says this is happening in Oklahoma?"

Trump Supporter: "Why are you so ANGRY about this?"

Me: "You've given no evidence, except an anecdotal claim. Why should we believe this is true? Surely if this were actually happening, someone would be reporting on it somewhere."

Trump Supporter: "Why don't you give me evidence that it's NOT happening?"

Me: "I did. There's no media coverage. If all the schools in Oklahoma had banned the pledge, Fox News would be talking about it non-stop. You know that's true."

Trump Supporter: "I don't even watch Fox News! Stop condescending to me!"

Me: "You're repeating lies as if they were the truth, and getting other people to believe them. That's not okay."

Trump Supporter: "Don't call me a liar! Just like a liberal, always start insulting people when they're losing!"

And so on, endlessly. Trump supporters will never admit they're wrong, even when they obviously are. They will dismiss any evidence you give them as "liberal bias" or "liberal lies." And they will go straight to the "why are you so angry/mean/elitist" as soon as they start losing.

I'm an educator, and I have kept giving in to the urge to educate, certain that if I just present evidence and data in a reasonable way, learning can occur. People can change.

But Trump supporters dismiss any evidence or reason that contradicts their worldview. They are not using rational creatures. They are a cult.


I went into school to turn in the tuition waiver for the Kid's fall semester. This is always such a hassle. I mean, it's absolutely worth it, since we get 40% off the tuition*. But jeez.

Every semester, there is some new required bit of paperwork. The required paperwork isn't actually listed on the form -- you don't find out exactly what you need until you try to turn in the paperwork, and then some apologetic human resources person says, Yes, you've got the waiver filled out correctly, and yes, you have the copy of your income tax form, showing this kid is actually your dependent, and yes, you have the enrollment confirmation, but this year we want (X) also!

So you have to go find that thing and make a second (sometimes a third, if the thing you find isn't the exact right thing) trip to file the paperwork.

It used to be just the waiver and the enrollment confirmation. Now it's like six different forms.

Still worth it, yes, but irksome.

*Nothing else, not the fees, not the room and board -- all of which are the most expensive part of a university education -- just 40% off the tuition itself. Still, this comes to almost $3000 saved per academic year, and that's not nothing.
Posted by delagar at 11:55 AM No comments:

Labels: The Kid, The Kid at College, whining

The Kid's Apartment and Georgia O'Keefe


Today we moved the first part of the Kid's stuff into their new apartment. The second (bigger) haul goes up next week, when the Kid moves up to Fayetteville for the semester. 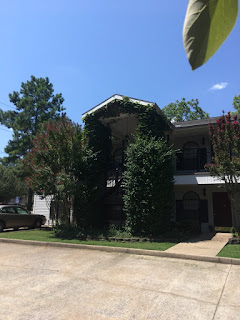 This is the exterior of the apartment, though you can't actually see the Kid's unit from this pic. They've got a top corner apartment, with big windows. Very nice.

After we moved the first load in, we went on up to Bentonville, to Crystal Bridges, to see the Georgia O'Keefe exhibit. This was several O'Keefe paintings and a couple sculptures by her, as well as a number of works by other contemporary artists.

One of my favorites was a collage by Mark Lewis, who is an artist from Tulsa. It just blew me away.

This is the collage, but believe me, this image does not do it justice. You have to see this one in person. 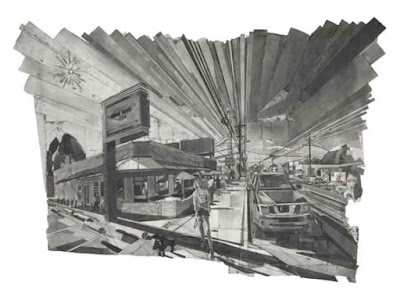 There was also this amazing collection by Cynthia Daignault, called Light Atlas. she drove across America, stopping every 25 miles to paint what she saw. These are small paintings, and just beautiful. 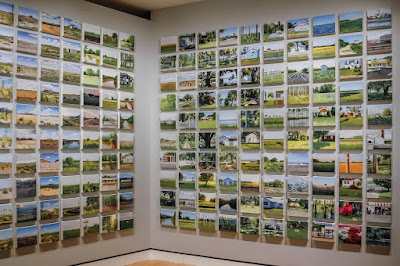 Again, this image does not do it justice.

If you can get to this exhibit, you should go. It's amazing.