It's been interesting (and by interesting I mean entirely predictable) to watch the reaction of the Far-Right to the recent shooting of five members of the Republican party at a DC baseball practice. Somehow they have been able to shrug off all the other mass shootings and killings in our country over the past years. But this one! Oh, this goes too far!

See this thread by Sarah-from-here for more.

Meanwhile, here's what I've been reading:

This is a manga, translated into English (or anyway my version is). Set in various locations along the Silk Road in the 19th Century, it's beautifully drawn and a lot of fun. There are a number of plot lines, including arranged marriages, women who don't perform their gender correctly, family life, women's lives, and a visiting European anthropologist who runs into some trouble.

Interestingly, given the presence of that anthropologist, A Bride's Story is less plot-driven and more of an anthropological look at the lives and traditions of the characters and their families. One of my favorite sequences in Book One in which a carpenter explains his work to a small boy from one of the families. The art in this section is spectacular.


A similar wonderful sequence involves the women of one of the families explaining weaving to one of the daughters -- how carpets are made, and why they matter.

I've read through Book 4, and am waiting for the remainder of the volumes to arrive. Highly recommended. 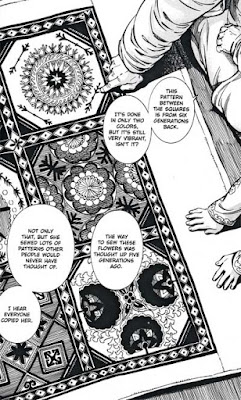 I keep trying to like Jane Smiley novels -- one of her earliest works, Moo, I liked quite a lot. That one was an academic novel of sorts, set in and around a land-grant university, and sort of a comedy.

This one I like better than her other works (besides Moo) which I have read. The conceit is interesting. She follows one family and their lives starting in the 1920s and going through the early 1950s, writing one chapter per year. So we watch characters age, while other characters are born and grow up, all with the historical backdrop of the world of the 1920s, 1930s, and 1940s. The patriarch of the family has just returned from WW1 when the novel opens; his sons and nephews fight in WWII. Also, they all live on a farm in Iowa, so the Depression and the weather issues of the early 1930s form a big part of the story.

I enjoyed reading this, but I'm not motivated to pick up its sequel. So I guess 6/10, won't read again?

I love this book to bits. I've read it maybe six times so far, and every time I like it more. It's hard for me to believe I haven't reviewed in on the blog yet, but apparently not!

Like Smiley's book, this one follows a character and her family through the years -- from 1910, when the main character is born, up through the mid-sixties (sometimes).

The "sometimes" is what makes this book so entrancing. Our main character, Ursula Todd, dies at birth on the very first page of the novel. And then in the next chapter she is born a second time, still on that same day, and her life is saved -- though she dies at age four.

Not only her life is affected -- by changing events, she changes the lives of those around her. And at some point, she begins to remember that she is doing this: living different lives, over and over.

It's brilliantly written and deeply intriguing. There's a follow-up novel, A God In Ruins, which is also very good, but doesn't share the same conceit as this one.

I'm an enormous fan of Jo Walton, and will read anything she writes. I talked about her Farthing series a few weeks ago -- this one, like Atkinson's Life After Life, is a what-if sort of story, though here it is only one split, not multiple lives.

We follow the main character, Patsy, through her childhood until she makes a crucial decision in her early 20s and either does or doesn't marry her fiancee, a named Mark. The Patsy who marries Mark goes on to have one sort of life; the one who doesn't has an entirely different life, in an entirely different world, one in which she falls in love with a woman who is a plant scientist, and has a delightful career writing travel books about Italy.

Neither world is ours -- that is, both iterations of the character live in England from the 1930s through the 1980s, but neither are living in our England, or our Earth. The history is different in subtle ways, such as JFK getting assassinated earlier and by a different method; or not being killed at all, but living on through a second term.

Each world has its virtues and its terrors, and Patricia (in her old age) begins to remember both of them. Which was her real life -- which set of children her real children?

As always with Jo Walton, the writing is wonderful, pulling you ever onward.

Set in Ireland in the Year Without a Summer (1816), this is a mystery novel of sorts, though also a character-driven novel. It's from the point of view of the adolescent daughter (late adolescence, I think, though her age is never stated) of an Irish coroner. The daughter, Abigail Lawless, has been raised almost entirely by her father, and is (shades of Sherlock Holmes) a polymath and a burgeoning detective.

The infanticide of a child born to a neighbor's maid launches Abigail into an ongoing and dangerous controversy involving a local sect of religious fundamentalists, the neighbors and their servants, and Dublin's social and legal system.

The setting and the character of Abigail herself are the strengths of this one. I'd definitely read a sequel.

Meg Elison, The Book of Etta

In 2014, Meg Elison published The Book of the Unnamed Midwife, which I read in one giant gulp. That book hit my sweet spot, being an apocalyptic novel fat with gender issues and feminism -- a plague strikes which kills most of the women and all of the babies being born or in the womb. The Unnamed Midwife, who is writing the journal which forms most of that novel, gets ill from the disease but recovers, waking (shades of The Walking Dead) in a hospital filled with those who died from the flu. The rest of the novel concerns her struggle to survive in a world which is 99% men. (Men died too, but at a much lower rate than the women did.)

The plague kills all infants conceived, and often kills the pregnant mother along with them, so along with the Midwife's tale we get the story of many women, impregnated by the men who have captured them, who die (frequently) and bear children who die (always). The book ends with the Midwife settling into a town where, finally, a living child is born.

The Book of Etta is a sequel to The Book of the Unnamed Midwife. We're at least 30 or 40 years after the first book, and most of the book is told from the point of view of Etta/ Eddy, a young trans man from the Midwife's town, who goes out on frequent trading and exploratory missions. When he's in the town, he has to be Etta, a young women; when he's out of the town, he can be himself, Eddy.

That's part of the plot; but the main plot is the dystopian world which still exists, due to the preponderance of men in the society. We still have about 90% men to 10% women, and while some babies live, many still die.

What happens to a world that is mostly male? That's what this book explores.

Nice writing, as with the first, and great worldbuilding.

This is a novella by Anders, who wrote All The Birds in the Sky, a book I highly recommend.

Here, we have the lone survivor of some sort of apocalypse (a technological fix for global warming that went astray, maybe?) holed up in a Panic Room. She lives there for a couple of years, watching old television and eating frozen dinners, until finally she emerges, into the vast wasteland of the world to find everything destroyed...

...everything except a genii in a bottle. When she opens it, he tells her she gets three wishes. And that's when the story becomes interesting.

The discussions between Marisol, our main character, and the genii are the best parts of this, though of course Anders also writes wonderfully.


Becky Chambers, A Long Way to a Small Angry Planet

This one got a lot of buzz last year, but I just got around to reading it. I can see why people liked it, and I enjoyed it well enough. It's the story of a small ship and her crew who get sent on a risky mission (they don't know it's risky when they accept the mission).

The plot is entirely beside the point, though, because this is an episodic novel in which events occur that aren't really related to each other or to the plot. It's a Life on This Ship novel, complete with interesting and occasionally adorable characters whose interpersonal relationships and family backgrounds are what we hear about, and care about. The plot is entirely peripheral.

As I told my kid as I finished it, "This book has a polyamorous lizard as one of the main characters, and also a Lesbian who falls in love with the lizard."

Also another character whose culture involves letting themselves be infected with a virus that lives in their heads (like, another intelligent person, living in their heads) and gives them astonishing mathematical ability, but also kills them in their early 30s.

Also a giant snorfling creature of some sort, very nearly the last of his race, who has eight sets of vocal chords and loves to cook.