Okay, this is kind of hilarious.

Apparently the White House sent this document of Talking Points to their boot-licking puppets at Fox News: 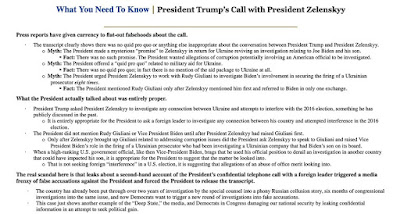 And then they also sent it to the House Democrats.

And then they realized what they did, and sent a follow-up email saying oops, send it back, plz.

It's both hilarious and horrifying. They've fucked up the country so much. Imagine what they could do if they were both evil and competent?

ETA: As a reminder, THIS is what Trump is trying to get is to pretend is no big deal:

That @realDonaldTrump thought it a good idea to release this transcript is a staggering testament to the endemic corruption of his administration. He and his close advisers have lost the ability to even see what’s incriminating. https://t.co/eXDJs0uKrZ
— Samantha Power (@SamanthaJPower) September 25, 2019