I read about this book on several SF blogs I follow, and saw it mentioned by I don't know how many people on Twitter -- everyone raving about it -- so when I spotted it among the new purchases at my library I snatched it up.

The raves weren't wrong. This is a wonderful book.

It is not an easy read. If it hadn't been for all those accolades, in fact, I probably would not have pushed past the first 20 pages, which are dense and require a lot of faith on the part of the reader. This, as the title suggests, is a book about complex politics. It's a science fiction book, obviously, so they're alien politics. And the cultures involved, though human, are weirdly human. (Though this is one of the best parts of the book, once you're past those first few pages.)

There's also a f/f romance, and a delightful friendship, or rather more than one, and and wonderful writing.

And there's an index/glossary/list of characters at the back of the book, thank God.  As with Russian novels, I read this one with two bookmarks, one in the index, and one to mark my place in the text.

Mary Norris, Greek to Me

My point is, when I saw this book, Greek to Me, on the shelf at my library, I snatched it up with small squeaks of delight. Mary Norris worked as a copy editor at the New Yorker for years; during her tenure there, the magazine paid for her to take classes in both modern and classical Greek (can you hear me burning with envy from way over here?). She also traveled extensively in Greece on her extensive vacations. Five and six week vacations. This is apparently what the world used to be like. (Burning with envy.)

This book is a collection of essays about her experiences: with the languages; of her travels in Greece; about her reading classical Greek and modern Greek texts; about her life in general. The essays are hit and miss, but you can skip the ones you don't like so much and go on to the ones more to your taste. (I did.)

My initial impression, as I read through the first pages of this YA novel, was that it was going to be a retelling of Snow White from the point of view of the mirror.

But Harrison subverts our expectations at every turn. It's true we're in the point of view of the mirror, very soon. But Snow White gets barely a mention, and the horrific betrays the mirror commits (and some of them are so horrific I almost stopped reading) turn the plot in new directions, mainly due to the surprising strength of the two young women who are the main characters, and the love and strength of the father of one of the young women.

I don't want to give spoilers, and I can only recommend this one like 98%, because the ending doesn't entirely work, I think; but the rest of it is very, very good. The rest of it is work reading despite the ending. And I'm certainly going to look for more of this writer's work.


Lori Gottlieb, Maybe You Should Talk to Someone

This is a memoir, or maybe creative non-fiction. Gottlieb is a therapist who finds herself in need of therapy. This book is a narrative of her therapy, and also a narrative of her work as a therapist with several patients. (She got permission from the patients, and also changed a number of details, but this still seems a little unethical to me. I know I wouldn't want my therapist writing books about what happens in my therapy sessions. But she did get permission from her clients, so.)

It's a good book, and beside being entertaining and skillfully constructed, with plot-lines and character arcs and dramatic reveals (Gottlieb's initial career was as a story editor in Hollywood) it actually has something to say about the human psyche -- what we do with trauma, how it fucks us up, what we can do about that, why therapy works.

You kind of have to be interested in that, in trauma and fucked-up-edness and what to do about it for this book to be really good; but it's also good in the way reading Freud is, for the deep dive into the human mind.

It's also the story of a certain sort of life (a middle and then upper class woman) in a certain time (late 20th to early 21st century) in a certain place (Southern California/Hollywood). That part is also worth reading.

A fer days ago, you might remember, Pete Buttigieg told us his ten favorite books. The internet being what it is, people immediately began to mock him, especially for his first choice, James Joyce's Ulysses, which I also think is one of the most overrated books on the planet, but never mind, that's not the point of this post.

The point of this post is someone on the Twitter then claimed that he would rather read Ulysses over and over than read any graphic novel.


I'd rather read 'Ulysses' over and over and over than ever 'read' a graphic 'novel'.
— Christian Lorentzen (@xlorentzen) April 4, 2019

That's not the point of this story either. The point is, his tweet got like 700 responses, most of them recommendations for brilliant graphic novels, and one of which was Bechdel's Fun Home, which I hadn't read in a long while.

So I re-read that yesterday. I'd forgotten what a large part Ulysses plays in it, by the way. Deeply ironic!

This is Bechdel's big breakaway work, the one that made her famous, and for good reason. It's brilliant. Brilliant structure, brilliant art, brilliantly written. It's autobiographical, the story of Alison's father and their family -- mostly the father and Alison, both of whom are gay, and the two houses that stand as metaphors for their lives, the immense Victorian house her father spends most of his life restoring, and the funeral home (the "fun" home) where her father works part time "restoring" bodies, preparing them for their viewing.

The book covers Alison's life from early childhood through early adulthood. There's a companion novel about her mother, Are You My Mother? which is also brilliant, though in a different way. If you haven't read these, you should. And well before you read Ulysses (or Uselesslys, as we call it around our house). 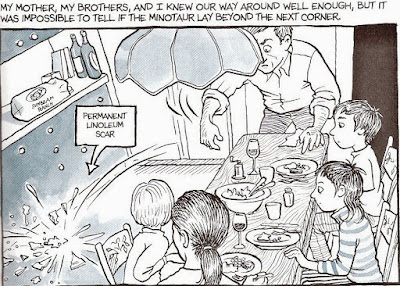 I've read this one before, but it's been nominated for a Hugo, so I read it again. Even better this time.

This is an excellent and ripping yarn, filled with engaging characters (lots of them women characters), re-imagined and sometimes inverted myths and fairytales, mixed in with Jewish shtetl life and a high stakes plot.

Very readable, as Novik's books always are. If I was voting for the Hugo's this year, this one would be high on my list.