The Rich and the Poor Alike Are Allowed to Post $12,000 Bail


I've been thinking about this story. 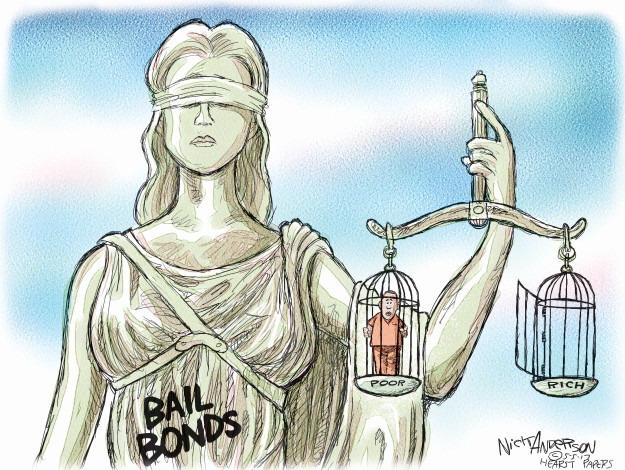 It's the Guardian, so no paywall, and you can click through, but the basics are this: It's Austin, Texas. A woman is waiting for her food at a food truck, as you do in Austin. Another woman, Gina Guidry, approaches, asking for money.

This is fairly common in my city, so I imagine it's fairly common in Austin as well. People usually have a riff -- their kid has diabetes and they need money for insulin, or their car is out of gas, or they don't have money for groceries. Maybe it's true, maybe they want to buy meth. I don't know, and I don't care. I always give them a couple of bucks.

But if you don't, that's fine. We all do our own moral calculus.

This person at the food truck didn't. And Guidry started yelling in her face, and then grabbed a dollar out of her hand. So the woman called the police.

The police show up. Guidry has gone nowhere. She still hanging out by the food truck, which tells you, I think, a lot about Guidry's mental and emotional capacity. The woman points her out: "That's her. She took my dollar."

The police arrested Guidry, and charged her with a felony. Sure, it was only a dollar, but "theft from the person" is a felony in Texas.

Also the bail for that is $12,000. Which obviously Guidry doesn't have.

So Guidry is being held in jail, awaiting trial -- which as we know means she can be held for years -- at the expense of the state, at the expense of what we can guess is her already fragile mental health, and toward what end?

I'm not saying whoever this woman who called the police on Guidry was wrong. It sounds like Guidry is probably not firing on all cylinders, and I'm sure the experience was terrifying for the woman who was attacked.

I'll add, also, that this story only happens because our economy is so broken. If we had resources for the poor, the addicted, and the damaged, Guidry wouldn't be wandering the streets begging for dollars, or screaming in women's faces at taco trucks. And if she was, there would be places we could take her that aren't Texas jails.