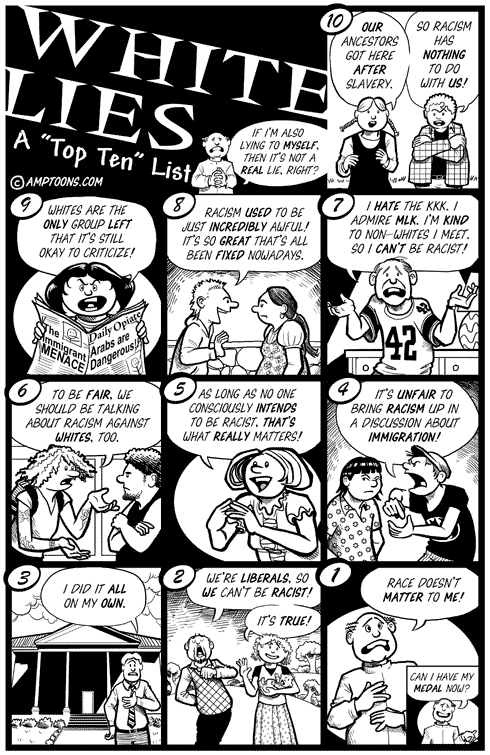 
My gentle attempts (no, really) to convince them otherwise have had little effect.  Everyone knows, you see, that the best way to win a scholarship is to be a black gay man in a wheelchair (haw haw haw) and that a straight white male has little or no chance of getting into Yale. (Little actual evidence supports these claims.)


Part II: "But white [Christian] men really are discriminated against these days!"

Recent studies show that white American believe they are the most discriminated group in American history.

And, of course, we all know that straight white Evangelical Christians are the most persecuted group in not just America but the world.  (AND MORE IS COMING!)

What's the actual truth?  What are the facts? These are:


"White Americans are, as a group, born healthier and live longer and get better health care, jobs, education and housing in the years in between. Yet half of white Americans believe that discrimination against them is as big a problem in their lives as it is for those of people of color. But there's just no evidence to back that up."

It's also a fact that most of Yale is white; that more than half of Yale's students are male; that your chances of being hired at a job if you are a white male convicted of a crime are better than if you are a black male without a conviction -- even when you both have the same level of education.

This makes them angry and anxious.  Do they admit their anger and anxiety?  Do they deal with it, and agree that it's wrong?

No, they project it. "I'm not bad.  Those people who are making me anxious, and trying to take what should be mine (my unearned and undeserved privilege), they're bad."


Part 3. "But look here, there are poor people in Arkansas! (Or Kentucky!) How can you say these people have privilege!"

Rod Dreher, our buddy Rod Dreher, who I really should leave alone, because I am starting to think he is having some sort of breakdown (not even kidding here -- Rod, if you're reading this, talk to your therapist, son), Rod posted about this today.  There are poor people in Kentucky, was the gist of his post, and therefore, black people can't actually be discriminated against.

Or white people don't have privilege.  Or both of those.  Who knows.


*Examples of terrible arguments: "It should be equalism, not feminism!" "The minimum wage will just cause businesses to cut jobs / hamburgers to cost $40!" "Feminism is why we have unemployment today -- if women just stayed home with their kids, there would be plenty of jobs for men." "If we raise welfare benefits, women will have kids just to get free money."  Feel free to supply your own terrible examples in the comments!

(Cartoon by Barry Deutsch.  Click here to support his Patreon.)


ETA: See also this: White guys just don't get offended, not like the rest of us.