But it is interesting, for what it says about America in the early 1970s, especially when you contrast that to America in 2015.

I can't give you a chapter-by-chapter review, because, like Pratchett, Ira Levin apparently does not believe in chapters.  So we'll do pages.


The Stepford Wives
By Ira Levin

Stepford Wives is a relatively short novel.  My version is 148 pages.  Nothing about it is at all difficult to read.  It's your classic thriller, in other words.

Pages 1-11: This version has an introduction by Peter Straub, which I will skip, because I think he's mostly wrong in his interpretation.  Maybe I'll review it at the end.

There's an epigraph from Simone de Beauvoir, The Second Sex.

This is the book that argues that men make themselves the "real" sex, the "real" humans, and make women into the Other sex, into the Other in general.  Men use this Othering as an excuse to ignore the needs and in fact the reality of women, de Beauvoir argues. Women become a class that is not fully human (not like men, not like real humans) and whose humanity, therefore, can be discounted.

When someone isn't, really, human, you don't have to worry about their rights.

But the quotation Levin chooses isn't about any of that, interestingly. It's about the other half of de Beauvoir's argument:

The book opens in the point of view of Joanna Eberhardt -- we are in her POV for most of the book -- who has just moved into the town of Stepford with her husband Walter and her two kids, Pete and Kim (who has just started kindergarten).  The scene is the Welcome Wagon lady welcoming her.

Welcome Wagon lady, sixty years old but "working on youth and vivacity," tells her what a wonderful town Stepford is, and then confesses to working for the newspaper.  This is so she can interview Joanna.  This is so we readers can learn about her (nice move, Levin!) and this is so the plot can start fast (very nice move, Levin!). 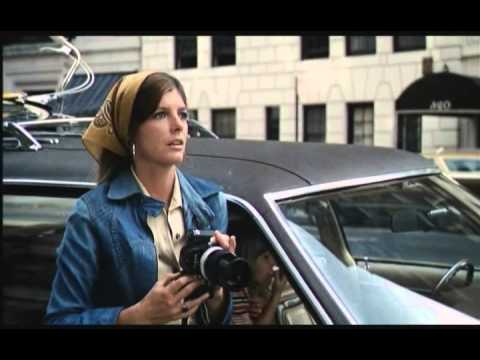 Right away, Eberhardt tells the Welcome Wagon lady she has a (sort of) career of her own -- she's a photographer -- and then we have this exchange.

“And I’m interested in politics and in the Women’s Liberation movement. Very much so in that. And so is my husband.”

“He is?” The Welcome Wagon lady looked at her.

“Yes,” Joanna said. “Lots of men are.” She didn’t go into the benefits-for-both-sexes explanation; instead she leaned her head back into the entrance hall and listened: a TV audience laughed in the family room, and Pete and Kim argued but below intervention level.


If you are like me, at this point you wonder about wonderful Walter, so interested in Women's Liberation. Why isn't he in charge of listening for the kids and breaking up their fights? Why is that Mom's duty?

After Welcome Wagon lady leaves, with her VW full of dogs -- and after a spooky minute when Joanna thinks she sees someone watching her from the house across the street -- she goes in and deals with a fight between Pete and Kim.  Pete has changed the channel during Kim's TV show; Kim retaliated by kicking him. Mom settles it by turning the TV off entirely and sending them both outside to play.

Later, we learn that Walter, a good supported of Women's Rights, does the dishes sometimes. Relieved of this duty, Joanna takes a shower after dinner (this is pre-AC, apparently) and then, because the kids aren't fighting for once, is able to have a few minutes to herself.

It was a good evening. The unpacking was done with, finally, and she was cool and clean, with a few free minutes—ten or fifteen if she was lucky—to maybe sit outside with Walter and look at their trees and their two-point-two acres.


I have to tell you, I'm quoting this mostly because I know exactly how she feels -- fifteen minutes to myself, OH BOY -- but also, holy shit, 2.2 acres?  And this house, as Levin describes it, sounds like a fucking dream.  Later, we'll hear that it cost fifty-five thousand dollars.  In 1970 dollars.  My inflation calculator tells me that's right around $340,000 dollars in today's money.

(1) These people ain't working class, yo.

(2) This is what the middle-class used to look like, before Reagan and his heirs fucked us. (Okay, the upper-middle-class.  BUT STILL.

Joanna and Walter go out to sit on their patio and smoke a cigarette together (yeah, everyone smoked back then) and Walter mentions that he's decided to join the local Men's Association after all.

Joanna is pissed.  The Men's Association doesn't allow women, it's anti-Feminist, what the fuck, Walter?  (Not in those words, she's a very nice girl for a feminist, I have to say.  And as it develops, this is precisely going to be her downfall.)

(Ooo, is that foreshadowing I see, Ira Levin?)

Then he goes inside, and Joanna stays outside to muse and think about how they left the "filthy, crime-ridden city" (this was back when everyone believed in horrible youth gangs and hippies on drugs and the rising wave of crime that was going to engulf us, fap fap fap, see Escape From New York for more).

Then she hears her next-door neighbor, Carol Van Sant, taking out the trash, and goes over to say hi and invite her over for coffee.

Carol, who is "tall and leggy and naked-seeming," "edged by the purple of a lit-from-behind dress," won't come over for coffee.  She has to wax the living room floor. Always so much to do, she says, and besides, she has to stay home with the kids while her husband is at the Men's Association.  Yes, he goes every night. She goes inside.  Joanna watches her through her kitchen window as she begins scrubbing the sink, her "big purpled breasts bobbing."

(Uh, okay, Levin.  That's kind of gross.)(Though maybe that was the point?)


Walter laughs like this is funny and goes off to his meeting.