Ignorance at the Top


Over on Twitter a conservative guy I sort of like (he's at least willing to try to base his conclusions on reliable evidence) claimed that sky-high rent and cost of living is not a problem, or at least not one that causes poverty and homelessness.


Because moving away from unaffordable cities is not an exotic expertise question. It’s a thing people do under ordinary circumstances, every day.
— Tom Nichols (@RadioFreeTom) June 12, 2019

He says people can just move. Go to some place where the rent and cost of living are more affordable. Get a job there.

In reality, almost half of Americans can't cover a $400 emergency expense. (This is what's happening this week in the delagar household -- Dr. Skull needs dental work, and it's $500. It might as well be five million. We don't have it, and we don't have any way to get it.)

First off, you'd have to quit your job and get a new job. This assumes that well-paying jobs are readily available in places with cheap rent, and that a person in poverty can easily get one. Neither of those things are true. (Dr. Skull, who has a PhD, has been trying to find a job literally anywhere in America for the past three years. He is finally getting interviews, but they're for jobs that pay between $40,000 and $50,000 a year. And while the rents in these places are cheaper than the rents in say, San Francisco, they aren't that damn cheap.)

Also, quitting your job and "just moving" will mean at least a month without a salary, unless you're very lucky. Given most households in America live paycheck to paycheck, this is a non-starter.

Second, you'd need money for moving expenses, and the deposit and first month's rent on your new place. See "Not able to cover a $400 expense," above.

Third, "just moving" will take many Americans away from their social safety network -- the grandparents who will babysit their kids in an emergency, the dentist who will let them pay $50 a month instead of requiring the money upfront, the neighbor who knows how to fix cars cheap.

Finally, even assuming you can get past all of the above, moving to where the rents are cheaper is not so easy. Almost everywhere in the USA, rent has been increasing steadily, unlike people's incomes. 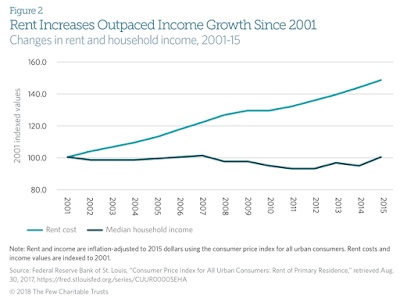 So yeah. A really bad take.

We're not even that poor -- we're solidly middle-class, according to the income quintile tables -- but I have been trying to move us to a cheaper place, literally in my own town, for the past year and a half.

I can find cheaper places (cheaper by $100 to $150/month); and there are several I would very much like to live in.

But first I need to save up at least $1000 in moving expenses.

See: Americans don't have $400 for an emergency, above.

Right now I'm just hoping the car (which has over 100,000 miles on it) doesn't break down, because if it does, we're fucked.

Labels: American Capitalism, Being Poor In America, The economy is broken

Blessings on your head for truth telling! Hope the pointed headed out of touch ignorant one actually is confronted with such reality. Why oh why did I automatically assume he is WASP in appearance? Why if you two would just get better than a high school diploma and work hard you would have pulled yourself up totally on your own with a hard work ethic ...AND........ Other such sh**. That is not true.
Truth is the $400 problem the majority of Americans face. Truth is the cost of moving a house hold. Truth is the cost of rent and first and last month as well as security deposit. Truth is location and availablity of jobs and what jobs actually pay and that LOTS of low-income workers have 2-4 jobs and still cannot make rent. Truth isn't part of the Conservative movements reality because it is inconvenient to them.

"Tom Nichols is an academic specialist on international affairs, currently a professor at the U.S. Naval War College and at the Harvard Extension School. His work deals with issues involving Russia, nuclear weapons, and national security affairs. Wikipedia"
YUPE. I was right. Why oh why do I suspect he isn't the first college grad in his family? Why oh why do I think there was financial advantage in his family as he was growing up? Cynical Old Me! Accurate too.


As the current parlance has it, "wealth transfers" between "generations" mean guys like Nichols will *never* have a clue what it means to be working class or middle class in this country.

Do you have an online tip jar for onetime donations?


I do now! And thanks for the suggestion!

Send this guy Nickled and Dimed. He needs a reality check.