I watched a mocumentary on Netflix called Death to 2021, and I considered calling this post that, only maybe a bit stronger (fuck 2021), but rose above it. As the kid said when his boyfriend learned that someone in their family (with whom the boyfriend had just spent a week) had just tested positive for Covid-19, "Yeah, 2021 just had to get in one last 'Fuck you'."

May: This was fun

July: Unmasking as a Cultural Marker

September: In a rare burst of good news, my book is released, is featured on Scalzi's Big Idea, and gets good reviews

November: I come to a realization

December: Another bit of good news!

Also, this was the year of Evergreen, Jorts the Cat, Milkgate, that Texas law, and This. Also we're currently at 823k deaths from Covid in the US, and 54 million cases. USA! USA! USA! 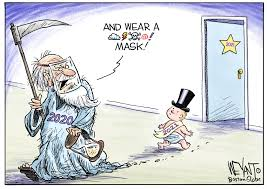