Jorts: Or, Why the Internet was Invented

Y'all, if you have missed the saga of Jorts the Cat, you need to rectify that omission at once.

It starts with this AITA submission:

[EDITED TO ADD:]This post is about 2 cats who are named Jean and Jorts, cat tax HERE :

THE STORY We have two workplace cats in one area of our worksite. They add value to the worksite, we all love the cats and the worksite cat presence is not the issue. One of the cats (Jean) is a tortoiseshell cat we have had for years. The other cat (Jorts) is a large orange cat and a recent addition.

Jorts is just… kind of a simple guy. For example, Jorts can’t open a door even when it’s ajar— he shoves it whether he is going in or out, so often he closes the door he is trying to go through. This means he is often trapped inside the place he was trying to exit and meows until he is rescued.

My colleague Pam (not her real name) has been spending a lot of time trying to teach Jorts things. The doors thing is the main example — it’s a real issue because the cats are fed in a closet and Jorts keeps pushing the door closed. Jean can actually open all the other interior doors since they are a lever type knob, but she can’t open this particular door if she is trapped INSIDE the closet.

Tortie Jean is very nice to poor orange Jorts, and she is kept busy letting him out of rooms he has trapped himself in, so this seems easy to resolve. I put down a door stop.

Pam then said I was depriving Jorts of the “chance to learn” and kept removing the doorstop. She set up a series of special learning activities for Jorts, and tried to put these tasks on the whiteboard of daily team tasks (I erased them). She thinks we need to teach him how to clean himself better and how to get out of minor barriers like when he gets a cup stuck on his head, etc. I love Jorts but he’s just dumb af and we can’t change that.

Don’t get me wrong— watching her try to teach Jorts how to walk through a door is hilarious, but Jean got locked in the closet twice last week. Yesterday I installed a cat cutout thing in the door and Pam started getting really huffy. I made a gentle joke about “you can’t expect Jean’s tortoiseshell smarts from orange cat Jorts” which made Pam FURIOUS. She started crying and left the hallway, then sent an email to the group (including volunteers) and went home early.

In her email Pam said I was “perpetuating ethnic stereotypes by saying orange cats are dumb” and is demanding a racial sensitivity training before she will return. I don’t think it’s relevant but just in case, Pam is a white person in a mostly minority staff (and no she is not ginger/does not have red hair).

TL;DR: AITA for ‘enforcing an ethnic stereotype’ by joking that orange cats are often dumb?

So much followed (SO MUCH), but my favorite is this bredlik poem:

My name is Jorts
And wen im fed
Or wen a cup
is on my hed
I just need help
to set me free -
and thats the tyme
Pam butters me.

Anyway, this is Jorts and his friend Jean: 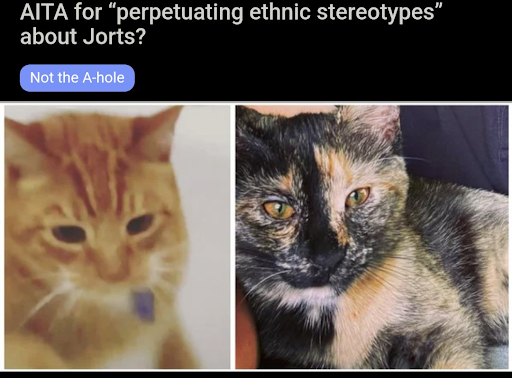