So this morning I had to go have blood work done. This is due to the cancer I had a billion years ago -- I'm on medication for it to this day, and every six months they need to draw blood to make sure my liver and kidneys are still happy and my thyroid levels are nominal. It's annoying, but better than being dead, at least so far.

ANYWAY. The mask order has been lifted here, which if you've had a look at new cases in Arkansas, that's pretty hilarious, and totally to be expected. Also our state legislature has just passed yet another ridiculous law, saying that no workplace in Arkansas, not even hospitals, can require its workers to be vaccinated. This has empowered our Trumpists, who see the law as evidence that their militant ignorance is justified.

ANYWAY. The medical building where the lab is located has a strict masking policy -- no one can come in without a mask. Most people seem fine with this. (I'm fine with it, even though I'm fully vaccinated, which means technically I shouldn't need a mask anymore.)

But about ten minutes after I arrived this morning, a Trumpist arrived, maskless. The lab tech pointed out the sign. The Trumpist argued, saying the masks do nothing, saying she didn't "have" to wear a mask, saying it was her body, her choice -- all the Trumpist arguments. The tech tried to explain that this was a medical building, that people came in here who had lowered immune systems, and that policy was --

"Shut up!" the Trumpist snapped at her. "You shut up and let me talk!"

The tech shut the door in her face and left.

"Rude bitch," the Trumpist said, and other unpleasant things, looking around at us as if waiting for agreement, or applause, or who know what. We all gave her stony stares, and she huffed and stomped away. 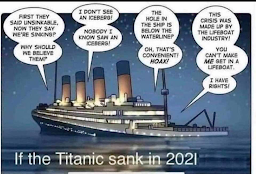