I'm sure this is just fake news, though. Or all the people in the ICUs have comorbities. Or they're old and would have died anyway. Or whatever absolute batshit the MAGA crowd are spewing at the moment.

I’m an Arkansas ER physician. We are at the point warned about a year ago. There are no ICU beds in the state. 4 days ago we called 5 surrounding states looking for ICU beds and we were unsuccessful. (Thread)

If this was just killing these whining, ignorant losers who have swallowed every bit of propaganda put out by Fox News and QAnon -- if it was only their lives they were risking -- that would be one thing. But these heaps of garbage are also risking the lives of the immunocompromised, some of them my students, many of them children.

What is it that the Far-Right say about that? Well, those people are weak, and we should let them die.

Eugenicists at heart. Or they would be, if they had hearts.

ETA: Bet you can guess who this vile loser voted for: 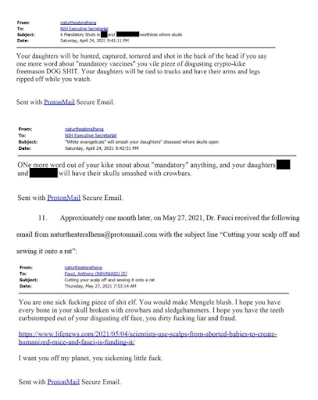