Remaining Trump Supporters: the Unhinged and the Bizarre

Most people have now accepted that Biden actually won the election.

This is not to say that we don't have some unhinged fringe numpties still pushing truly bizarre nonsense and calling for violence to support their nonsense.

Look, I know you guys think I’m crazy when I say that only 10 to 25% of the democrat votes are REAL votes. But think about it: think about forcing Joe-the-houseplant in, and then giving him one of the least appealing running mates possible. And then running a potemkin campaign mostly from the basement.

...they went so completely out of their minds and really hate us so much [because of Trump’s election], that they’ve been throwing a naked rage-fit for four years, and doing what they can to hurt America and secondarily to drive Orangemanbad off. And 2020 has been like the expression of how much they hate and despise us. Yeah, at the top the lockdowns were driven by Chinese agents (this is not under dispute) but the left loves them, embraces them and keeps resorting to them because it destroys small business owners, families and well…. Americans.

Someone in the comments calls for a "limited nuclear war" on "core cities" to removed these dangerous liberals who hate America. Someone else agrees with him, and says that, after all, nuclear wars are quite survivable.

This is logical progression from Reagan through George W. Bush to Trump. Here, have a look at Stephen Colbert's riff from the 2006 White House Correspondence dinner -- look at how many things he's warning us about that now are just commonplace.

This isn't all down to Fox News and talk radio -- people on the Right have been happily gulping down Kool-Aid since about 300 A.D. -- but yeah, Rupert Murdoch weaponsized that shit.

(Though it is kind of funny that the Far-Right have swirled so far down the hole that they have now turned on Fox News.)

Notice that in the post above, Hoyt explains to us how smart she is -- that's something I see a lot in such garbling nonsense from the unhinged. They're convinced that they are smarter than anyone around them, and therefore they can see the conspirators all the sheep are blind to.

And notice how, having been thwarted by the election of Biden, these unhinged buckets are willing to jump straight to shooting those who dared to oppose them:

So…. are we going to fight for our liberties? Is the fourth box on the program? I’d like to think so. Not because I’m a fan of war and destruction, but because there are worse things than war, and the destruction of the land of liberty from within is one of those

It's the Dunning-Kruger train crossed with the propaganda jet engine, and it takes us directly to MAGA country, where public schools are evil, fact-checks have a liberal bias, and you can't trust science but you can totally trust some slicked-up talk show host who is in this to fill his pockets. 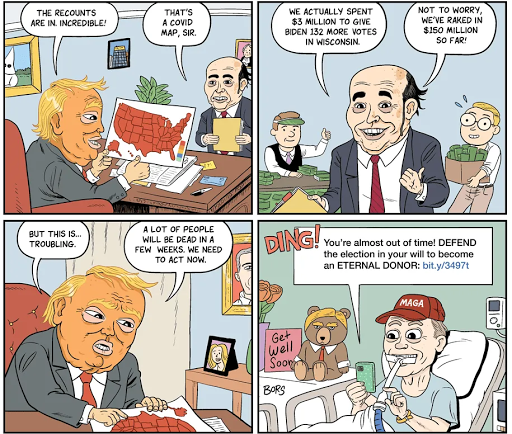 ETA: See also this. I love how at the end he asks Trump to be the better man. Has he met Trump?