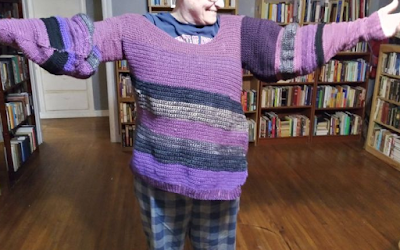 There were some problems

Haha! Don't mean to be rude, but I can totally relate. Am currently on the fourth try of a scarf - pretty much the easiest thing you can knit!! - because I keep losing track of the simple four-stitch repeat... Have started using a "life-line" so that I only have to rip back a bit every time I lose focus. Not sure I would still've been knitting this otherwise. Don't know if that is an option in crochet or if it would help at all in your case.

Meant to add that the colours work really well!
/silvi

My first sweater turned out to look as if it had been made for someone 8 inches shorter and 50 pounds heavier than I am. The next one was better.

But you chose great colors!!

It's a start, and you finished it, so well done! The next one will look better!

I got better as I went along -- you can see one sleeve is (SOMEWHAT) better than the other!

I hope you'll forgive me for saying your sweater is classically hilarious. I have been there and accidentally knitted things for someone twice my size, or infant sized. You know the joke about frogging, right? Why do they call it frogging? Because you ripit, ripit.