The best part of marrying into and adopting Jewish traditions is how much better Hanukkah is than Christmas, at least in terms of celebrations.

Hanukkah is eight very low-stakes nights, and includes allowing small children to light candles and mess about with melting wax. There are latkes on the first night, which is wonderful; and only brief prayers as far as rituals are concerned. 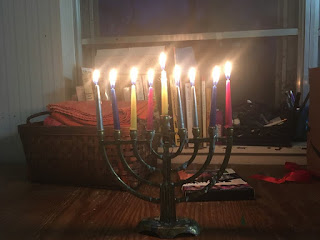 Also it is often over before Christmas, which means while all the world is harried and overwrought, making huge dinners and having crowds and political arguments, I am nestled in my big white chair in peaceful silence, working on my novel and listening to a cat purr in my ear. (Jasper has taken to sleeping on the back of the chair while I work.)

Today we are having Charger, the kid's fictive uncle, down for a dinner which includes mince pie, because he was not able to travel to be with his family; but that is not much trouble, and also he is bringing wine.

The kid remains in Fayetteville, with his sweetie and BFF roommate. They had Chinese food, thus fulfilling the mitzvah. 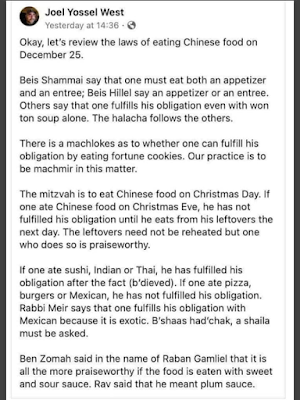 Hope all is going well wherever you are, and whatever your plans!

If Rabbi Meir's position is correct, would it follow that it would not be a mitzvah for Kaifeng Jews to eat Chinese food on December 25, on the grounds that such food would not be exotic for them?

I believe the sefardi tradition to be more lenient as to consuming restaurant food on Christmas Eve, and surely pikuach nefesh directs us all to get takeout this year, but only if it is possible to do so safely!

The kid and his buds got door-dash