The Kid and the Apartment


At the Kid's university, freshmen are required to live in dorms. So this year they lived on the 7th floor of one of the older (cheaper) dorms on campus. Which they liked well enough -- it was close to most buildings where they had classes, plus the room has an amazing view of the Arkansas hills and mountains. (Here's a photo from the window.) 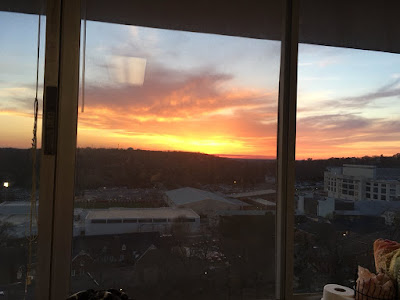 But even the cheap dorm room is really pricey, plus there's almost no privacy. So next year, they're going to live in a tiny apartment just off-campus. This past week, we went up to Fayetteville to see what we could find.

We had a short list of things we needed -- not too pricey, that was (A).

(2) was "close to campus." Since the Kid doesn't have a car and won't have one any time soon, we needed a place within walking distance of campus. This one could be set aside if the apartment was on the bus route -- though that would make it more difficult for them to get to class on time.

(C) If possible, close to a grocery store

(D) Pets? The Kid really wanted to take the little dog with her.

Everything after that was in the box with "that's cool but not necessary."

We found, finally, a little one-room apartment which pays all utilities including internet, which is only about two blocks off campus, and is right by a walking / biking trail which leads down to Dickson Street.  There's a dishwasher, and a washer/dryer included, which is nice.

It's unfurnished and it doesn't allow pets. But other than that, we're happy.

I will say that rents have increased enormously since I lived in FV as a grad student. I had a comparable apartment back then (1990's) which rented for 1/4th of what the Kid will be paying.

Wages have not increased at that rate, obviously.  I'm just sayin.

Labels: The Kid at College


I wish the rent were just a smidge less, but other than that, we're delighted.