Life in the Lower-Middle class 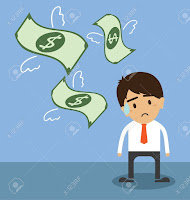 I've blogged, briefly and glancingly, about our money woes before. But I've never talked about the details. Partly that's because I can clearly see that whining about living on just over sixty thousand dollars a year (my pay since I got the salary bump on making full professor) is not a good look, not when I'm surrounded by people who would love to make half that. And partly because it's just depressing.

When I was a graduate student, living on six thousand dollars a year, I used to get very scornful and judgy about people who complained that their twenty or thirty thousand a year wasn't nearly enough to live on. Try living on six a year, I would fume to myself. See how that works out for you!

How it worked out for me was that I didn't buy health insurance, which meant when I got cancer I had destroyed my entire future. But that's another post!

First of all, we pay a ton of taxes. I worked it out once, and between Federal, state, and city taxes -- plus the 11% sales tax which we have in Fort Smith -- we're paying nearly forty percent of our income in taxes. Don't forget to deduct the cost of health insurance!

That's something like $3300 a pay check. From this, we deduct rent, utilities, and medical costs (co-pays on prescription drugs, paying off the standing debt to various hospitals and dentists, which right now is running me something like $400/month), and we're left with somewhere around $1800/month for other expenses.

That sounds like a lot! It would have sounded like a lot to me in graduate school as well.

But from that, we have to deduct food costs and household expenses. We have to put gas in the car. If there's an emergency that month (there is always an emergency) we have to pay for that. Does someone need new shoes? A new pair of jeans? (Someone always needs something.)

What about having fun? Subtract the cost of a Netflix subscription, also subscriptions to an online newspaper (right now, NYTimes, because they give me an academic discount), also the cost of subscribing to a couple of SF magazines, because it's my field, also monthly donations to the ACLU and a couple other charities (the local food bank is my big donation this year), and very quickly we are left with only four or five hundred dollars.

Again, this sounds like a lot! I should be able to save that money, against the next medical emergency, yes?

Except inevitably some OTHER emergency always appears. We only have one car, for instance, so if something goes wrong with it, we have to rent another car while that one is in the shop. Then we have to pay for repairs.

Back last summer, for instance, in the space of three months, the radiator in the car sprang a leak, and then the catalytic converter went. That last one cost us, in repairs and car rental, almost four thousand dollars. You know I don't have that much saved -- so it went on the credit card. Since then I've been fighting to pay that off. (Good luck, at nearly 30% interest.)

Or Dr. Skull's computer has some problem. (I don't own a computer -- the school provides me with a laptop, thank God.) Or the printer breaks. Or someone (me, this time) breaks a tooth. Or, or, or.

Theoretically, is what I'm saying, making what I make in this area, we should be middle-class. And we are!

Notice, also, what is not in this "budget."

We don't have money for vacations. (Sometimes we make a day-trip to Crystal Bridges. That's our big holiday.)

We don't have money to sock away for retirement (apart from what the school requires from me, which right now is about 3% of my paycheck -- they add another 5%).

No money was ever saved for the kid's college -- I had to rely on my parents to come up with that. If they hadn't, the kid would have attended my school, lived at home, and probably taken out loans.

And remember! I'm doing well. This is a good salary for this area.

Try to imagine how people making $35,000 a year are living. That's the paycheck for Oklahoma teachers. Or how the guy who rents us our car is doing -- Enterprise Rentals pays him $30,000 a year. Or the woman who cuts my hair, or the waiter at a local restaurant, or the clerk who rings up my groceries.

I suspect all of them -- like me -- are carrying a load of debt, created by the fact that our paychecks do not stretch to cover such fripperies as dental work, medical bills, and car repair. Something like one-third of everyone in the US is being dogged by collection agencies. And in many places this is leading their arrest and jailing.

I make just a little less than you, but only have me to support, so it's way easier. And I've been incredibly lucky with health issues, too.

I think I count "middle class" as meaning you can afford food and shelter for everyone in the family, and can handle small emergencies without taking out a loan or borrowing or going hungry. But when I read in, say, Nicole and Maggie's blog about some folks who make so much money, it seems unreal. It seems like there's a point where some people really confuse "need" and "want."

(I recognize that it's a lot more costly to live in other areas, of course.)

It seems like we need a better way of articulating the difference between someone who makes a large income but doesn't have savings and such to live easy, and someone who has savings (or a magical trust fund) who can make much different decisions. (And probably has access to the networking to get high income jobs, too.)

For earlier periods, we might use "gentry" for folks who really didn't need a job outside of managing their holdings, and other terms for people who did have to work, but might accumulate more so that their kids could become gentry. And then there's the rest of us, who mostly work to eat and shelter ourselves.


I can remember a time when one middle-class person working only one job could support a family, buy a house, own a couple of cars, take a two week vacation every summer, and *also* save money for the future. This while having and supporting three or four kids. That's what "middle class" used to mean.

The neighborhood I grew up in was full of people like that. No one was rich -- no one had as much money as those in the upper 5% do now -- but everyone had enough, and a bit left over.

Wages have been flat for forty years, while housing, education, healthcare, food, and energy costs have skyrocketed.

It's a broken economy.

One mega-thing would have solved this for us (three kids, one part-time and one full-time income plus some freelancing that brought us up to about $70,000). National health service, with or without co-pays and deductibles. The feeling of having no or little savings is MUCH worse if the emergency you imagine is one that could put you in debt for the rest of your life.

Medical debt / medical costs have been the biggest reason for my inability to reach and stay in the middle class. And the claim that the USA can't "afford" universal health care is specious, given how much we are already paying for health care that is inferior and leaves hundreds of thousands of people in financial ruins.