As always, since the election of the Great Circus Peanut, I am reading enormously, even obsessively. Literature is the opiate of me.

What am I reading? A lot of science fiction, and a dash of older literature, plus a few other works.

This one won't be released until June -- I read an advanced copy -- but it's leading the list here because it's one of the best SF/F novels I've read in some time. Do you know that feeling you get, five or six or ten pages into a novel, bone-deep, chilling, and wonderful, when you realize that once again, lucky you, you have a truly wonderful book? It's only happened to me twenty or thirty times in my life, but it's a great feeling when it happens. It happened with this book.

It's an ensemble novel, a cast of characters led by Ben and Essa, two humans (more or less -- I mean, I think Essa is human) and add, as we go, Essa's "Ism," a powerful and not exactly magic sort of being; a kind of Spider-Robot; and Winter, who is part girl and part something else.

We start out in Australia, where Ben is desperately unhappy and trying not to admit that. He's also fascinated by Essa, as who wouldn't be. When Essa opens a door into the Well, they both go through, and now we're Wellside. I can't even begin to tell you how cool Wellside is. It's a "well," or else a biopsy, plunging through...something, into which doors open. These doors lead to worlds. Billions of worlds. Countless worlds. One of these worlds is the one Essa is from, the Library.

Now she just has to get back.

John Wyndham, The Midwich Cuckoos, The Day of the Triffids

Why am I re-reading John Wyndam? Who knows. I remember reading both these books when I was fifteen or sixteen, and reading every science fiction book in our tiny (branch) public library. I remember not being impressed with them then. They haven't improved over the years.

They're not bad books. I don't mean to say that. The writing is good (though not nearly as good as in Robin Shortt's book), and while the plotting is very slow, it's serviceable. Also, maybe this sort of science fiction -- aliens take over the world by impregnating our women, the hive-minded alien as a threat (and a transparent metaphor for those vile communists); and then technology, especially as harnessed to the war-machine, leading to world destruction -- seemed more impressive at the time these books were written.

Something about coupling these plots with the middle-class suburban Everyman point-of-view, though, seems like a real mistake. In both books, our point of view character is basically a cipher. He observes, he records, but he is as blank and empty of characterization as the default Twitter egg. This robs the events in the books of any real impact.

It's an odd choice, and I can't think what to make of it.

Patrick Ness, The Rest of Us Just Live Here

You might know Patrick Ness from his more famous books, A Knife of Never Letting Go, and A Monster Calls. He can write, is what I'm saying.

Here in this book, though, we're in a different territory. Mikey and his sister Mel and their group of friends, including Jared, who is very tall and who cats really, really like, live in a town in northern Washington State. They're not the kids who fight vampires, or seal the rifts in time, or drive out the Gods of Chaos. They never turn out to be the Chosen Ones. Those are the other kids in town, the "Indie kids," as Mikey and his friends call them.

Mikey and his friends just live here, and try to deal with their own lives, which are fraught with other problems -- Mel is anorexic, Mikey's struggling with OCD, and Jared...well, I'm not giving you spoilers, but yeah, Jared.

The story of Mikey and his friends is great, and it holds out attention through the book. But meanwhile, and this is also great, an entirely different novel is running along in the background -- the story of what's happening to those other kids, the Indie kids. The two plots converge, wonderfully, as the novels concludes.

This is a novel that is funny in the best way, the kind of funny that breaks your heart. Young Adult, but great.

Some violence as well, but nothing terribly graphic. The culture of the wolves and the witches is also well-done. I'd be interested in a sequel.

Good God, Forster. I re-read him every six or eight years, and every time I do I get more impatient with him. He's so mannered, so bourgeois.

On the other hand, there's something about the books, especially Howard's End. I remember really liking Where Angel's Fear to Tread as well, but our library doesn't have a copy of that. Maybe I'll see if I can find a copy through the used bookstores.

Meh. This was a readable, but (so far as I can tell) not particularly accurate novelization of the first years of Queen Victoria's reign. From what I can tell, Goodwin was aiming at creating a romance novel -- the young queen must choose between the forbidden love, etc, etc, and her true destiny, whatever. Since we know the young queen ends up with Prince Albert, the tension Goodwin is trying to pull off never arises.

And since those of us who know something about the history know the actual course of Victoria and Albert's relationship, we're grumpy all the way through the novel anyway.

I can't recommend this one.

I forget who recommended these books to me. Did I read about them on someone's blog? Anyway, they're my sort of mystery! Academic setting -- a British boy's school -- with multiple points of view and psychological intrigue.

After you have read one, though, I warn you, the "mystery" in the other is easy enough to guess. That is, Harris uses the same trick in the first as she does in the second. Still, very readable and a lot of fun.

I read this one for the first time a long time ago -- in graduate school, I think?

This is another ensemble piece. I'm a sucker for ensemble novels. Here, we have a group of friends who meet while they're in school (the women are at Barnard; I'm not sure where the men are), and stay friends, with intertwined lives, through adulthood.

This works as a novel because the characters are all richly developed, with interesting, complicated lives. No ciphers here.

The spine of the novel is a two-semester long class in philosophy which the four women take as freshmen (or maybe sophomores?). All through the novel, memories and snippets from this class repeat and return, like bits of melody, or counterpoint.

This is the sort of book you need to be in the right mood to read. It's literature, not genre, I guess it what I mean. But also highly recommended.


Thi Bui, The Best We Could Do

I have trouble reading graphic novels, as I've probably mentioned. Something about the combination of print and picture -- having to do two things at once -- irks me. This is, as you might imagine, a great burden to the kid.

Still, I rose above it for this book, which is a memoir of the author's family, their life in Vietnam, and their journey after they left the country. 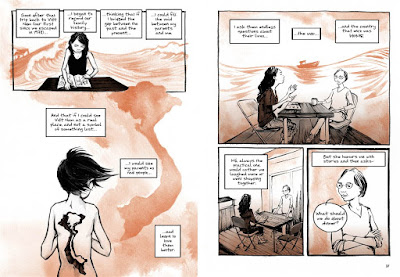 ooh, The Best We Could Do looks so good!

Purr, purr...and thanku for the good words about Wellside!

Delagar, Ohmegerd - THANK YOU for recommending Wolfsong! I've read 1/3 of that book so far and I'm engrossed in the story and aching over the characters. Excellent reading.

I used to struggle with graphic novels too, then I realised that I just need to be a different kind of reader for them - having to use two forms of input really slows down my usual "gobble-it-whole" reading mode and trips up the analytical part of my brain which makes patterns and comparisons as I go along, but reading more slowly and doing analysis/comparison later or whilst pausing from reading rather than simultaneously is actually, it turns out, a really cool way to read (with a GOOD graphic novel, at least).

Webcomics, which FORCE reading and thinking about one page at a time, are an extreme form of that mode of reading, and now a minor addiction of mine. It's been an interesting journey...


I think that's the problem I have with graphic novels, too. I've never been very good at doing two things at once, and that's the skill reading graphic novels requires -- looking at art while also reading words.

Once I gave myself permission to be slow, I got better!