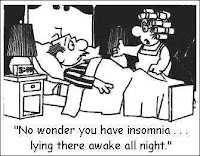 I'm having one of my periodic bouts of insomnia.

Ever since I can remember, and I'm talking since I was tiny, I've had what I have since learned is called delayed sleep phase disorder -- my body has a dysregulation of its biological clock, basically, such that I'm out of phase with the circadian rhythm of the planet. I need a thirty hour day, and here I am on this 24 hour planet.

I can remember being three years old, back when we were still living in the trailer, wandering around in the deep of night while everyone slept around me. I was too little to read then, and I mostly just climbed on the furniture and looked through the windows, out at the other trailers, ghosty in the moonlight.


Later, when I learned to read, and we'd moved into the house, I'd take books into my closet and read, though I learned to do this only after my mother had gone to bed, since being awake past eight p.m. was a high crime for a child in those days.

As an adolescent and a young adult, I just stayed up until three or four a.m. I mean, that was my business, right? Except when I had an early class and then, once I had a job that required me to be there by eight a.m., which meant (since I lived in New Orleans, and had to commute into the city via public transport) I had to be up by six a.m.

And then later as a graduate student, try as I desperately did, it was impossible to schedule all the classes I was teaching and taking so that they met after noon. As a teaching assistant, in fact, I had no control at all over when the classes I taught were scheduled, and they were often scheduled at eight a.m. Though at least, since this was Fayetteville, the "commute," still via public transport (I wouldn't own a vehicle until I was 30) was only ten or fifteen minutes long.

My point, and I do have one: Until I was in my early thirties, I lived a life in which I was, for most of the year, very nearly always sick with exhaustion. On the weekends I would get enough sleep -- ten or twelve hours a night -- and during summer breaks and holidays when I was a student, again, I got enough sleep*, but most other times, I was living on between two to five hours of sleep a night. Nights when I got six hours of sleep I felt deliriously well rested.

At some point in my early thirties I discovered Melatonin, I forget if someone suggested it to me, or if I read about it, or what. But I started taking it every night, and it was nothing short of a miracle. Suddenly I could lie down at ten o'clock at night, like a regular person, fall asleep, and wake up seven or eight hours later. Suddenly, I wasn't moving through life most of the time dull and fighting contant fatigue. Sleep was a pleasure, not a torment.  Waking was almost painless.

Now, for years at a time, I sleep and wake like a normal person. But every three or four years, I'll have a few days, or sometimes a few weeks, like this one, where sleep won't happen, not until three or four in the morning. It's always a little frightening, because the misery of those early days comes back, and I worry that maybe, this time, the Melatonin really has stopped working.

But it's almost always like this, in the spring, and so far it's always gone away again. This time too, I'm sure.


*Well, at least after I moved out of my parents' house I did. My father especially felt that sleeping late was an offense; my mother tended to wake early naturally, and turn one television after another on, all around the house -- the house had six, I think, toward the end of my residence there -- leaving them all on, often turned to different channels, and all with the volume turned up very high.

Sleep is for the weak.

I hope you get back to good sleep soon.


Thanks! Me too. Though I am enjoying staying up all night reading. That's a pleasure I forgot!

I have constant sleep struggles, too. I used to read until I passed out as a kid. (My kids currently do this.) Lack of sleep has always been a problem in my life, though, whether I'm reading or working or even trying to get to sleep at a normal time. I can go for about three months living mostly on adrenaline, but then I hit a wall -- like during spring break -- and sleep for more than 12 hours a day, and even when I'm awake I'm almost catatonic. It's the pits.

I've taken melatonin, and it seems to help. But I can't do it all the time because I really do have to get my work done, and I really do need to use my natural insomnia for time to do it. :(