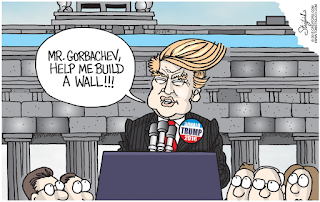 
So Friday this happened: on one of the buses, a Trump-supporting kid was arguing with another kid, about how Trump would make America White Great again, and so on; and the other kid was arguing back.  Then finally, exasperated, the anti-Trump kid said the Trump kid was an idiot if he thought Trump was going to do anything he said, or even could do it.

The Trump kid came over the bus seat and start punching the hell out of the other kid.

Result? Both kids end up being sent to SDC. (SDC = (in)School Detention Center)

"What the hell," I said, when my kid reported this to me. "Why punish the one who got attacked?"

"Because he provoked the Trump guy, or whatever."

"So much for free speech," I grumbled.