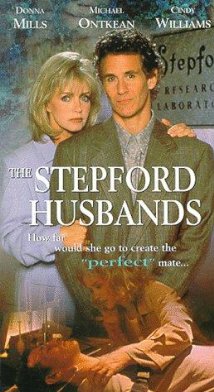 A Continuing Review of The Stepford Wives: Part 3.

This section starts with a day-trip to NYC to see a musical, among other things. I'd say that Levin was signalling the upper-class nature of our main character and her husband, except I think Broadway Shows at one point were something middle-class people could afford to see.

This brings me to a perplexing question -- I am not at all sure what class Levin wants us to understand the class of the Eberhardts. They seem to have plenty of money: enough to buy the pricey house in Stepford, and to keep Joanna at home with the kids playing at a job (she has a "career" as a photographer, you'll remember, but it's clear she can't be making much from her sales). They have two cars. They can run off to NYC whenever they like.

So I'd think upper class, except that their house seems like a standard house in the suburbs. Further, not just Joanna but every woman in Stepford seems expected to do her own housework -- all of it -- and to tend her own children with only rare use of teenage babysitters.


But all the money, the SAHM, the trips to NYC, Joanna's pricey "work," which requires expensive cameras and contacts with those who can sell her work -- that's not middle-class.

Though maybe the middle-class really was different in 1972 -- maybe this is, in fact, what a robust middle-class looks like.

Anyway! Back to the review.

This is the trip to New York City.  It adds nothing to the plot -- it's the first scene that doesn't -- and I'm puzzled as to why Levin included it, if it's not (in fact) a way to signal that the Eberhardts are upper class, and thus wealthy enough for Walter to fund his Sekrit Project.

Not much happens on this trip. They meet some friends, see a musical that they don't like, and come home. There's some incidental discussion of how much better the schools are in Stepford, which makes me wonder who is teaching in these schools? I can't believe a Stepford Wife would make a very good teacher. But then, none of the Stepford Wives have jobs -- good women don't.

This makes me think the Stepford Men must, in fact, all be upper-class.  Teaching being such a distinctly middle-class profession, after all.

In these pages, Walter brings a "committee" from the Men's Association home for drinks after the meeting. Joanna offers to stay out of the way, but he persuades her to come to the meeting.

Here, and later when Walter tends their crying child during the meeting, I believe Levin is doing a slight feint.  We're supposed to see Walter's behavior and think, aw, doing his share! Wanting to include his wife! What a nice feminist husband!

Instead, the (all-male, of course) committee is full of old creepy men, including Ike Mazzard, who is supposed to be a famous illustrator; and Dale Coba, the President of the Men's Association, who wears a jade turtleneck with his slate-grey corduroy  suit.  Nor is that the extent of his sociopathy.

Coba watches Joanna throughout the meeting with "disparaging" green eyes, and then when Joanna, like a good wife, goes to the kitchen making coffee for the men, Coba follows her.

He smiled at her and said, “I like to watch women doing little domestic chores.”

Joanna has a comeback:

“You came to the right town,” she said.


But it's clear that Coba is creeping her out.  She attempts to make pleasant small-talk with him, the way women are socialized to do -- God forbid the creep be called out on his creepiness -- and we discover that Coba's nickname, Diz, comes from the fact that he "used to" work at Disneyland.

Along with the fact that Ike Mazzard has spent the entire meeting making sketches of Joanna, this ought to trigger our suspicions

And we should, at this point, remember that Walter brought these men into his house, and all but insisted that Joanna attend the "meeting" with him; and that Walter, uncharacteristically, got up to tend their child.  He really wants these men to have a close encounter with Joanna, in other words.

This makes us suspect -- or it ought to -- that Walter didn't just chance into Stepford. He moved his family from NYC to this suburb specifically because of the Men's Association, and their Nefarious Plot.

Oh -- one bit I also want to mention.  While Joanna is being sized up, the committee discusses civic projects, including whether "Chanukah lights" as well as a creche ought to be set up this year, now that there were "a fair number of Jews" in town. I'm not sure what Hanukkah lights are, exactly, but it's interesting that this discussion seems entirely without animus. Of course (1) it's just a ruse discussion -- these guys have nothing to do with civic planning really and (2) Levin is Jewish himself, so maybe he's just indulging in wishful thinking.

OTOH, maybe in 1975 white Christian males really were that accepting of non-Christians.  It could be true.