"Now, of course, it is perfectly true that safety and happiness can only come from individuals, classes, and nations being honest and fair and kind to each other. It is one of the most important truths in the world. But as an explanation of why we feel as we do about Right and Wrong it just misses the point If we ask: "Why ought I to be unselfish?" and you reply "Because it is good for society," we may then ask, "Why should I care what's good for society except when it happens to pay me personally?" and then you will have to say, "Because you ought to be unselfish"-which simply brings us back to where we started."

(Page 19 in my version, but you can read on online version here. It's in chapter 3.)

The problem here is that I know Lewis is classically educated.  I know he must have read Plato.  So I know this is a dodge -- that is, I know he knows there is a different, and a better, answer to that question.

We ask: "Why should I care what's good for society?"

You say: "Well, you should care what is good for society, because society is where you live.  If you make a terrible society, you have to live in terrible society.  Will that be better or worse for you?"

We reply: "It will be worse for me, Socrates."

You agree: "Just so, my little grasshopper."

The fact that Lewis pretends there's no way to answer this question except Jesus -- that we can't act decently unless we've been filled with Holy Grace -- is dishonest. It is intellectually bankrupt.

On the second point that made me stop, I don't even think he noticed what he was doing.

Here, in Chapter Two, Lewis has been at some pains to convince us that some moralities are better than other moralities, and that everyone "knows" this, due to something inside us which can recognize the rightness of a moral act, in much the same way we recognize when a series of musical notes is played correctly versus when that series is not played correctly.

This thing inside us is a real feature, Lewis explains, and it isn't taught.  It's just there.  It can recognize that when one morality -- like the Christian morality -- is better than another morality, like the Nazi morality.

I'm not arguing with him a lot here, so far.

Until we come to this bit:


"But one word before I end. I have met people who exaggerate the differences, because they have not distinguished between differences of morality and differences of belief about facts. For example, one man said to me, "Three hundred years ago people in England were putting witches to death. Was that what you call the Rule of Human Nature or Right Conduct?"

"But surely the reason we do not execute witches is that we do not believe there are such things. If we did-if we really thought that there were people going about who had sold themselves to the devil and received supernatural powers from him in return and were using these powers to kill their neighbours or drive them mad or bring bad weather, surely we would all agree that if anyone deserved the death penalty, then these filthy quislings did. There is no difference of moral principle here: the difference is simply about matter of fact. It may be a great advance in knowledge not to believe in witches: there is no moral advance in not executing them when you do not think they are there. You would not call a man humane for ceasing to set mousetraps if he did so because he believed there were no mice in the house."

(All bolds are mine. As noted, this comes before the above section, at the end of Chapter Two.)


That right there is the reason I am so sickened and horrified by C. S. Lewis.  And, frankly, I doubt he even noticed what he was doing.

He has just been talking about the Nazis.  How their morality was an inferior morality.  And you know, it was.  He's right.

Or is that just Christians who are justified in burning women?* (No, I don't really believe this.)

What's the problem, here?  Why does C. S. Lewis make this horrifying and appalling error in his thought? I can see two reasons, and I think both apply.

First, he sincerely believes Christian morality is the best morality, because it must be.  This is his received wisdom. Since he knows ("knows") God and Jesus are real, then he can't admit any other possible answers.  So any other possible answers must be dismissed, somehow. He will turn his Oxford-educated mind to finding some way that his Christians were, in fact, acting morally.

Second, Lewis was a misogynist, deeply and blindly.  He really doesn't see women as people -- or, you know, not people the way men are people. So if a few hundred thousand or million of them get murdered by mistake, well, just girls, after all. Not like we were killing people.** 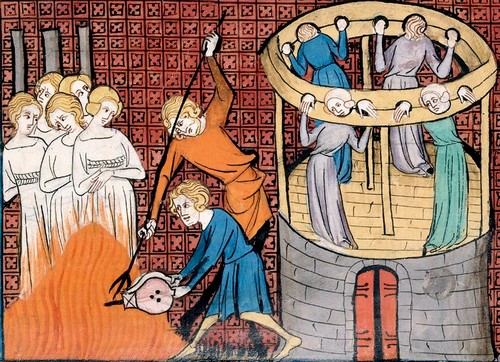 *Tens of thousands of witches were killed in Europe from 1200 on, most of them women or strangers -- xenophobia being a big thing then or now -- and many of them Jews.