You Knew I was a Scorpion

How are all y'all?
I'm just sitting here watching people piously call for "civility" after Trump has -- for months -- mocked those taking this pandemic seriously; after he deliberately downplayed the pandemic, leading to the deaths of more than 200,000 Americans; after he went to a rally knowing he had Covid-19; and while he is doing everything he can to strip away the civil rights and health care from those we love.
Oh, we have to be NICE, see, because if we say mean things about Trump while he's sick, why, we're no better than they are!
What's that you say? They brag about running over protesters, and shooting protesters? They celebrated Kyle Rittenhouse, who gunned down protesters? They danced in the streets when RBG died and gloated about how fast they could replace her? They're still doing that last?
But we have to be nice. Otherwise we're no better than they are.
Oh, Trump is getting excellent medical care at Walter Reed, while most of us cannot afford to seek medical care when we get sick, because of the for-profit thievery that is the US healthcare system?
What's that? Trump is doing his best to destroy ACA, leaving most of us even more helpless in the grip of the insurance companies and for-profit healthcare providers?
He's doing everything he can to strip rights away from women, trans people, minorities, and immigrants, leaving us all vulnerable when we need medical care, and in the workplace?
But we shouldn't complain! We should be civil. Otherwise we're NO BETTER THAN THEY ARE.
Listen, we need to get rid of Trump and kick every single member of the GOP out of office -- for good. If we could do that being "civil" I would.
And I don't think any of us are "celebrating" Trump's illness. What we're feeling is more like hope, mixed with tentative relief. Our rights and the rights of those we love have been under assault since he took office. We have felt threatened and at risk since he took office. More than a few of us have died because he's playing politics with American lives.
Wanting that to stop is not "celebrating." It's desperation. We're not happy he's sick. We're feeling hope for the first time since November 2016.
When we go high, they stab us in the back. When we play fair, they lie and cheat.

I think Biden & his campaign managers should read the tale of the scorpion & the frog, and reconsider their generous but misplaced gallantry. https://t.co/5FmwpQrKOd

This is a complicated question, since I have long been a supporter of Plato's notion that we can't make the world better by doing harm to people. If we harm someone, Plato explains, we make him worse. Since he is part of our world, then by making him worse, we are making the world worse. We must act to make him better -- we must treat him well.
Plato also said he was a citizen of the world. So everyone was his neighbor, a member of his world, and he must be seeking to do good for all.
On the other hand, Plato clearly approved of war. (See the Republic.) In war, not only do we harm people, we desire to kill them, and to kill their culture. We do this, clearly, in order to preserve our own culture, and what is good in that culture.
So it would seem that on some occasions, it is not only desirable but necessary to do harm to select groups of people. Who might those people be? Clearly, people who are dangerous to what is good in our culture.
Bad ethics drive out good. I'd love to have a decent world. But a world in which we act with civility is a world where Donald Trump and his ilk destroy everything that is good in our country in order to fill their own pockets and feed their own egos.
That's not a compromise I'm willing to make.
See also this:
ETA: Yes, this: 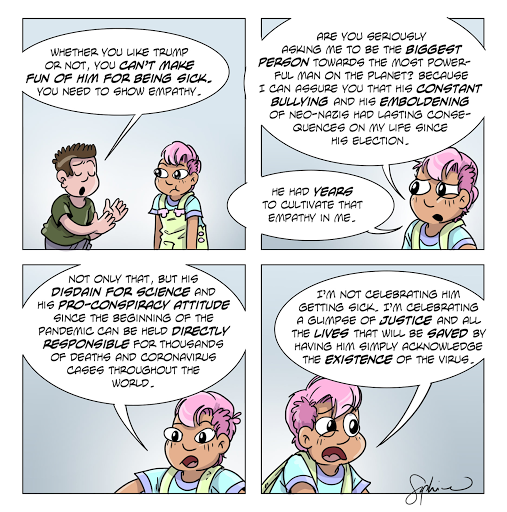 Labels: Life in Trump's America, Officially a Pandemic, Trump is a fascist

Those who insist on wearing white hats regardless of context end up in gulags or unmarked graves.

I prefer to see it all as the natural consequence of these people's actions. They kept touching that hot stove and eventually it burned them. How else will they learn?