Apparently some people like this book enough to have done fan art of it? So it has a target audience out there, who ain't me. 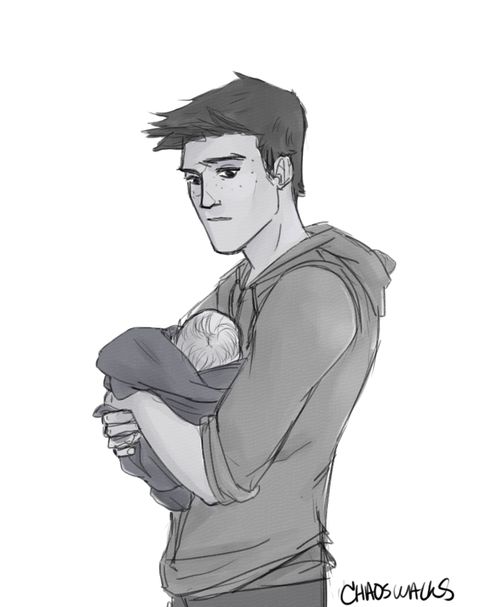 Here's Connor holding the Storked Baby, which, you know, is interesting, since he holds the baby once in the entire book, when Schusterman wants to write that touching paragraph. Otherwise, it's Risa stuck carting the infant around, and feeding it, and changing it, and dealing with it when it wakes up crying at 1:00 a.m.

But yeah. Connor holds it once. He's a hero.

Risa's point of view. The Underground Railway has dumped all the AWOL Unwinds in a big warehouse with no bedding, no heat, and only one bathroom (no bathing facilities) for over 40 adolescents. Also nothing to do except some ancient board games (Schusterman doesn't tell us which board games, but I'm guessing not Life, since how would anyone fit 10 kids in one of those little plastic cars?

Fights and friction ensue. Risa cleverly susses out that the bully from their first stop on the Railroad -- Roland -- is trying to take control of all the kids. Why? You got me. They're all going to move on soon, I assume?

Anyway, so we get Risa explaining group dynamics to Connor, who has apparently had social anxiety or maybe a touch of Autism. Risa defines this as him being a hero, since he's willing to fight "for his rights," she says, but actually he just fights when he's over-stimulated by crowds and noise.

The kids are being guarded by seven people in camouflage fatigues, and also armed with rifles. This leads to a surprisingly good passage, when Risa asks one of the guards why they're helping the Unwinds.

“Saving you and others like you is an act of conscience,” the woman had said. “Doing it is its own reward.”

The Fatigues all talk like that. Big-Picture-speak, Risa calls it. Seeing the whole, and none of the parts. It’s not just in their speech but in their eyes as well. When they look at Risa, she can tell they don’t really see her.

Connor's point of view. Nothing happens. Connor feels bad for losing Lev, Conner notices that Risa's analysis of what Roland was doing is correct. Connor is sad.

Risa again. It's Christmas day. The guards bring their food, and Risa goes to use the bathroom while everyone else is eating, except Roland follows her in and tries to rape her.

Connor interrupts and acts like he doesn't care if Risa gets raped, because, as he says, "We broke up this morning."

It's okay to rape girls in this world so long as their ex-boyfriends don't care about it.

But no worries! Roland was only raping Risa to get Connor to fight with him. (Why, when we've already seen that the guards don't care when the Unwinds fight? I have no idea.) So when he finds out Connor has ditched Risa, he loses interest in raping her and leaves.

Which was Connor's cunning plan all along.


Connor had done the right thing. For once, he had seen the situation more clearly than she—and he had probably ensured that Roland wouldn’t physically threaten her again, at least for a while. And yet there’s a part of her that can’t forgive him for just standing there. After all, heroes are supposed to behave in very specific ways. They’re supposed to fight, even if it means risking their lives.

Risa is disappointed that he is clever instead of violent. Heroes are supposed to be violent and dumb, I think is the subtext here?

Connor's point of view. Nothing happens. Connor is sad that Risa is mad at him.


We're 40% through the book. I hope this really dull sidetrack episode ends soon.