At our university, as at many I suspect, we're having a big push to increase retention. 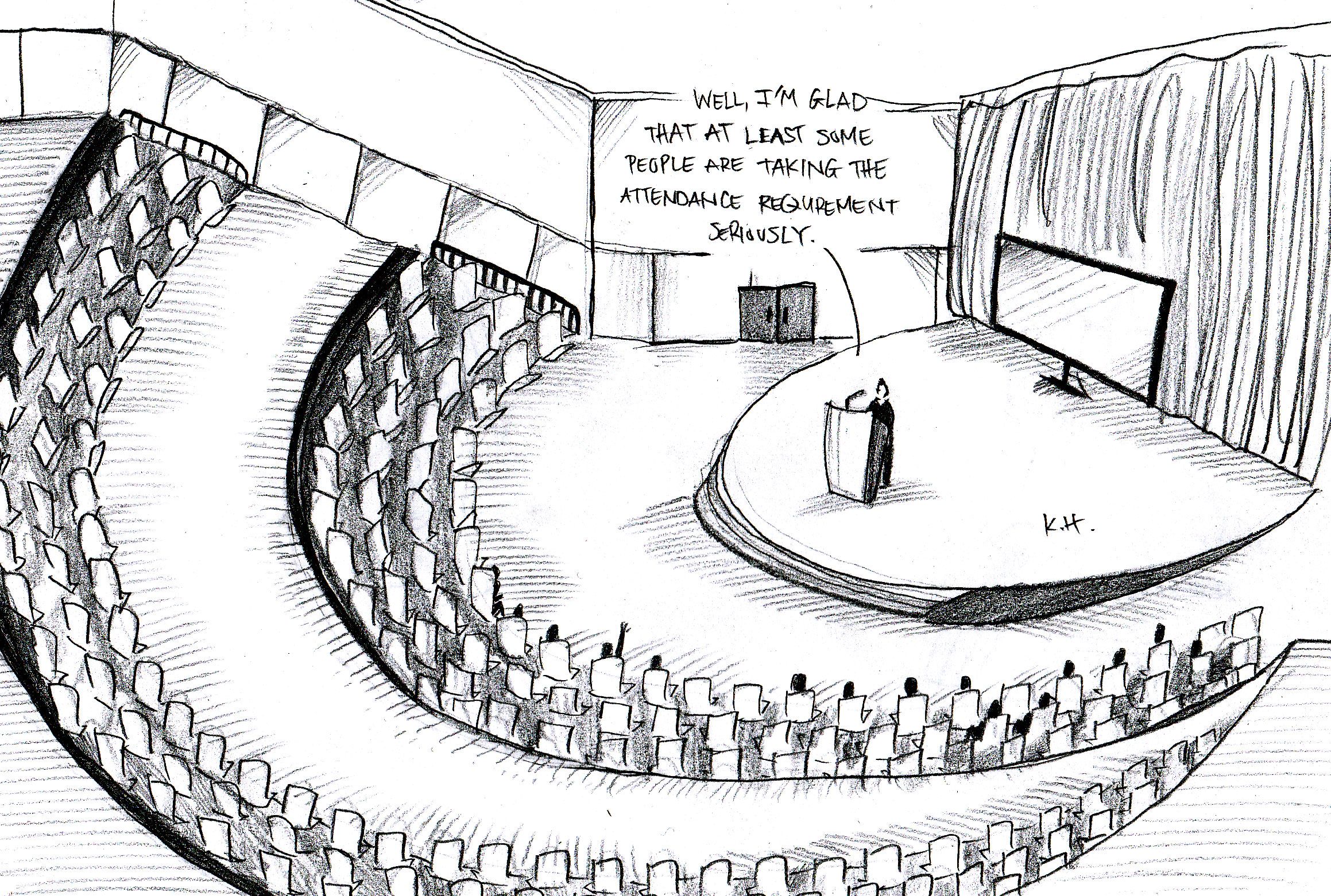 Your retention score is a big part of how much funding you get. So say 70% of the people who start full-time at your university in 2013 graduated 'on time,' which is to say within four years. Then you get more funding, and you keep your access to Pell grants, and all sort of lovely things happen.

70% is a really high score, by the way. Most universities have retention rates well below 50%.

Some of this is because students transfer. These students count against your retention rate even if they do finish in four years, because it's at some other school.

Some of it is because students can't handle the workload of attending college full-time and working full-time (as many students do today). Some of these students will flunk out; some will 'stop out,' as it's called, meaning they take a semester off, or two, and either never come back, or come back but don't finish in the four year period.

Some of it is because students can't handle the workload, period. They just don't have the reading and writing and math skills to do college-level work.

Some of it is because students never show up -- as in literally. They sign up for classes, and then never come.

These last two groups are the groups we're aiming at with our new attendance policies. What we're doing at our university is tracking attendance via a program (sold to our school for a pile of money, I suspect). When students miss class, they get an email, reminding them that they missed class. Every time they miss a class, they get this email.

Also, the program allows professors -- me, for instance -- to issue an alert. This tells our administration that X student has missed a troubling number of classes. Then someone whose job that is contacts the student and tried to find out what the problem is. If they've got financial problems, for instance -- maybe their car broke down and they don't have a way to get to school -- our person in administration arranges help (we have a locally funded grant program for just such problems). Sometimes the student just hasn't realized that missing classes is a big deal. Sometimes there are other problems.

So far, this program seems to be working -- that is, when I send in an alert, the missing student almost always shows up, back in class.

I've gone through several approaches to attendance in my years as a professor. Back when I was a baby professor, I didn't take attendance at all. If the student wanted to be in class, I figured, they'd be in class. They were adults, that was their business. My business was to grade their competence, in the form of the work they turned in to me. If they could pass without being in class, then I would give them passing grades.

Big surprise, almost no one could do that. Eventually, I started tracking attendance and issuing threats. If you miss more than X number of classes, I would say in the syllabus, then you lose X number of points. I almost never actually followed through on this threat. That is, I still based the final grade on whether the student could do, or had done, the work.

After a time, I started offering rewards: if you came to every single class, you earned a five point bonus. This was only slightly more effective. That is, many students earned that bonus, but they were the very students who didn't need a bonus. They were already coming to class and doing stellar work. They would have gotten A's without the bonus.

This semester, I'm basing none of the grade on whether students come to class, and I told them that up front. I told them I wanted them in class, but I wouldn't add or subtract points based on attendance.

So far students are mostly coming to class. And when they aren't, our attendance admin chases them down.

This two-pronged method (so far) is keeping more students in the classroom.

Does it mean those students will do the work, stay enrolled, and graduate in four years?

I do know that this is not a tactic I like -- chasing after grown-ass adults about their attendance. I'm not their mommy and I'm not their nanny. If they don't have the time or the interest to be in college, they shouldn't be in college. That's their business.

The lack of funding, the one that is causing so many of them to work full-time while also trying to attend college full-time, that's another problem. But I don't think that's one we're going to solve by harrying them about their attendance. That can only be solved by changing the way we finance university educations.

Without that change, our working students will continue to -- mostly -- do subpar work in their classes, because most people can't do excellent work when they've only got a few hours a week to devote to reading and thinking about their classwork.

So I guess we have to decide, as a culture, whether we want our citizens educated, and by that I mean actually educated, or do we want to make our richest citizens even richer, at the expense of our working class citizens.

Given that the GOP thinks higher education is an evil scam, we know which way they will vote. So if you care about educating Americans, maybe vote the GOP out of power.

Until that happens, all the nibbly little patches around the edges, like this attendance policy, are only stopgap measures, and probably ineffective ones at that.

Amen to all of this, especially the part after "I do know. . ." Very much my own thoughts on the subject. I'm not yet paying all that much attention to attendance -- though I do track it, using a self-check-in app for face to face classes these days -- but we just started doing midterm grades -- excuse me, midterm evaluations -- in the junior-level course I teach most often, and it's a pain, and the jury's still out on whether it will do much good, especially since I'm pretty sure the students already know whether they're doing or not doing the work, and are mostly not in denial about the consequences of that (I teach mostly engineers these days, so they can do the math when the syllabus says this or that is x% of the final grade), but I'm willing to do it.

Since I doubt we (the collective U.S. "we") are suddenly going to start throwing a lot more taxpayer money at the problem (which is really the only solution for improving 4-year graduation rates, at least at the sorts of places we both teach), I wish we could come up with planned, fully supported 2/3 time (6 year) and 1/2 time (8 years) paths to a degree. It seems to me that it would be better for students to start out with a realistic idea of how long it will take to get a degree given their financial circumstances and the amount of support available, and to have access to support even if they need to take a lighter load in order to accommodate all the paid work they need to do to foot their part of the bill.

"....planned, fully supported 2/3 time (6 year) and 1/2 time (8 years) paths to a degree. It seems to me that it would be better for students to start out with a realistic idea of how long it will take to get a degree given their financial circumstances and the amount of support available..."

I'm glad to hear that your school has a way to help students with car or other financial emergencies. It seems like the attendance thing is one way to get students to access that help (which they may not know about or think applies to them if not).


It is! And that's one thing I like about it. We have two different grants at our university meant to help students who are having unexpected (and relatively minor) problems -- like a car with a broken water pump, for instance, or a sudden loss of childcare -- but often students either don't know they can apply for these, or are too mortified to apply for them.

The attendance monitoring, and the ability to issue alerts, really helps with those students.

We have a similar attendance system... apart from have people whose job it is to reach out to students and help. THat's also on the faculty. We did get a leaflet about some of the services available to students (I know it's not all, because I work with students accessing other things). And a number for the STUDENT to call to talk to someone - which we're not allowed to call, and which assumes a certain amount of confidence and agency in the student which often isn't there (a lot of our disappearers add crippling imposter syndrome/anxiety/mental health issues to their complex of issues leading to poor attendance). Sigh. At least your uni seems to have thought this through!

Lo these many years ago when I was a TA, the university had recently instituted a university-wide attendance monitoring policy. There were all sorts of reasons given to the students for this, but the driving reason was this: they HAD to monitor the students on visas, and the admin figured they could only fairly do that if they monitored everyone. I'm sure there were cases when people might have gotten help as a result of the alerts, etc., but that always stuck with me. No one high up really cares if you're here, but we can't fall foul of the immigration policies.