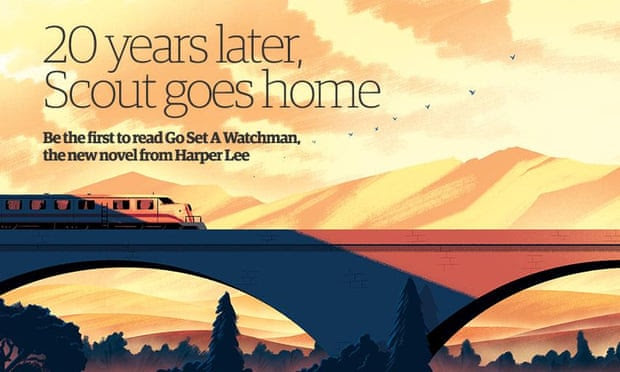 As I started out reading this book, I had some hope. The writing is lovely, and the early chapters are nice enough: It's the mid-1950s, sometime just after Brown v. Board of Education was handed down, and Jean Louise is coming home from New York to visit her daddy in Maycomb.

There's a train ride.  There's some trenchant and interesting commentary on the South and Maycomb and the difference between New York and the South and on one's ageing relatives. Some nice details about Atticus and Aunt Alexandria. This fella Hank, a new character, is introduced -- he's not part of To Kill a Mockingbird, but in the new history, he was always there, living across the street from Scout and Jem, and he was Jem's BFF, and Scout has always, sorta been in love with him. Lee does a good job of making him interesting enough that we see why Jean Louise might actually be drawn to marry him.


There's a nice scene where Aunt Alexandria tells Jean Louise she can't marry Hank, because he's not their sort.  He's got an education, all right, thanks to that despicable G.I. Bill, but he is still trash, and Finches do not marry trash. Furious, Jean Louise storms from the house. This looks like a throwaway scene, to show what a bigot Aunt Alexandria is, but it is a key scene.  The book pivots on this moment.

For this is what the book, as it develops, is actually about: how things like that G.I. Bill, and FDR's New Deal, and now, of course, this dreadful Supreme Court, those meddlers, with the help of the NAACP, coming down here to the South, where they don't understand anything -- how these outsiders are destroying Maycomb, and (by extension) the rest of the South.

Hints had been dropped before the pivotal scene with Aunt Alexandria.  The tacky cheap houses that those former sharecroppers were building, out along the highway -- building with money given to them by the Federal government -- had been mentioned, and comments had been made about how those former sharecroppers were making a living doing who knew what. (Though we do see one of them, a former Cunningham, who is running his own business in town. And of course, we see Hank, who is a lawyer now. But still! Those jumped-up sharecroppers! How dare they!)

And the center of the story is -- as most people who know anything about this novel know by now -- when Jean Louise finds a horrible racist pamphlet, put out by the Citizen's Council, which delineates the true genetic inferiority of the American Negro. Outraged, she goes down to the meeting Atticus is attending, and finds Hank there as well.  They are listening to to a horrifically racist speaker speak on the true aims of the NAACP and the American Negro. It is a speech so appalling it drives Jean Louise to actual physical illness.

The latter half of the book is given to Jean Louise trying to make sense out of the fact that the men in her life -- Atticus, Hank, her beloved Uncle Jack -- either outright accept, or rationalize the acceptance of this racism.

Uncle Jack does most of the work of trying to get her to accept the participation of Atticus and Hank in the Citizen's Council. He gives her the speech we have all heard a hundred times by now, how the Civil War was not fought over slavery, but because those valiant Southern boys just wanted the right to run their states the way they said, not the way the Federal Government said. (States Rights!)

Why, he points out to her, hardly any of the soldiers actually even owned slaves, Scout!  Did you know that! Well, did you!

And this is the exact same thing, Uncle Jack insists.  It's not that we brave and proud Southerners don't want our black people to have rights.  OH NO.  It's just that we don't want outsiders coming down here telling us what to do.  We know better than any Federal government how to bring the black people into equality!

Atticus gives her much the same speech.  Look at these black people, he says.  Look at Zeebo!  Do you think he can run a city? And they outnumber us, he says.  So if they get the right to vote, why, Zeebo will be our mayor.

(Here's the question Lee doesn't have Atticus ask, or Jean Louise counter with: why are the black citizens of Maycomb so ill-educated in comparison to the white citizens?  Could that be something that maybe a recent Supreme Court decision was meant to address?)

Black people, by the way, show up in this book almost not at all.  Calpurnia has about three scenes, most of them in flashbacks, where she is mothering little Scout.  There is one scene where Jean Louise goes as an adult to visit Calpurnia, after Calpurnia's grandson has been arrested for manslaughter. Calpurnia knows this grandson will not get justice in the Southern courts, and is in no mood to be kind to some rich white girl; neither are her family, who are gathered around her.

But the scene is -- you guessed it -- all about Jean Louise's white girl pain. Why is Calpurnia so mean to her?

To be fair, there is some evidence that this scene makes Jean Louise think a little bit about how black people have not been part of the (white power structure's) conversation at all, something she brings up when she's arguing with Atticus.  He dismisses this objection out of hand, though, and she lets him do that.

Then -- and oh my hell this is the best part -- Uncle Jack confronts Jean Louise as she is about to leave town, furious at her racist father and former boyfriend, and tells her she is the true bigot.

Well, because she won't even consider that Atticus might be right.

Yep.  She won't tolerate his racism.  So she's the bigot.

Jean Louise then sees the light, and returns home to embrace her daddy.

She does ditch Hank though, even though there is some evidence he's not actually a racist: he claims he's only on the Citizen Council because he has to be if he's going to gain any power and get any work in Maycomb, being who he is, which is trash.  This -- according to Jean Louise's lights -- makes him a hypocrite, and proves that he is, in fact, trash.  And Finches can't marry trash, Aunt Alexandria was so right about that. Blood will tell, Jean Louise realizes, and determines to remain an old maid forever if she can't find a man like daddy to marry.

My judgment?  Whoever originally rejected this book was right on the money.  It's not a book: it's a tract.  And conservatives (today's conservatives) should definitely read it. It's practically written with the Tea Party in mind.  They will love it to pieces.

Ugh. Thanks for saving me the trouble of reading it.

Sad thing -- one of my colleagues and his wife just had a baby girl and named her Scout after Lee's heroine. Wonder if they are rethinking that now? :-/

Surely we can treat this "sequel" the same way we treat Aliens III and IV? Just declare it doesn't exist?

There's a ton of evidence, after all, that Harper Lee didn't really want this published. This tells me (at least I'ma pretend it tells me this) that she thought better of what she wrote in this abysmal manuscript as she grew older.

Reading the review, I'm reminded of what Dave Barry had to say about I Hated, Hated, Hated This Movie:

"One of life's great pleasures is watching a really good critic tee off on a really bad movie. This book is wonderfully entertaining; Roger Ebert makes some of the movies sound so awful that I now want to see them."

Is the book really that bad?

----
"Surely we can treat this "sequel" the same way we treat Aliens III and IV?"

The Brilliant Books bookstore in Traverse City, Michigan, recommends treating the book the same way we treat James Joyce's Hero. Both were first drafts of what later became much better works. Brilliant Books is offering refunds to buyers of this "sequel" on the grounds that the work is neither a novel nor a sequel, even though it was marketed as such, but merely "an academic piece for scholars and fans."


D. Shannon: It is certainly a readable book. I read the whole thing in one night. And there are some lovely lines and bits of description.

Also, I got it from the library, so I don't have to worry about a refund!

But on the whole, yes, I have to say it's kind of horrifying. It's an apology for racist thought and belief. At the end, Jean Louise and her liberal ways are, in fact, presented as wrong. She and the NAACP and the ACLU and the Supreme Court are all in error. It is Atticus Finch and the Citizens Council who are doing the right thing, truly -- well, you know, not the *trashy* members of the council; but luckily good men like Atticus are there to keep the trash in line.

And black people are presented as children who need to be brought into the civilized world and civilized behavior slowly. This is what Atticus understands and Jean Louise is too naive to understand, according to the book.

But the men in her life -- Uncle Jack and Atticus -- mansplain it to her until by the end she gets it.

I agree To Kill A Mockingbird is a better book; but frankly some of this worldview bleeds through into that text as well.