What Am I Reading?


Cheese & Responsiblity and Nicole & Maggie do these sorts of posts from time to time and I enjoy them bunches. So here is one of my own.

I have been heavily into Laura Ingalls Wilder criticism and related readings for the course I am teaching on her; but I will not count that.  This is a list of what I'm reading for my own pleasure.

This is a re-read -- I first read the novel years ago, after it first came out.  I believe it was the first novel by Holland I ever read.  I only half-liked it (and only half-understood it, I suspect) at the time, being either fifteen or sixteen.  But I kept returning to it, and eventually sought out and read as many other Holland novels as I could find in the (limited) Louisiana library I had access to.

Floating Worlds is more or less epic SF tale of a woman, Paula Mendoza, who negotiates her way through a future in which Earth, Mars, and the Jovian planets form the Three Worlds.  Paula's from an Earth nearly destroyed by pollution; she rises to a precarious position of power via her connections with Earth and Mars' de facto governing body, The Committee, and the Jovian Empire's government, the Styth Akellar.

It's a long, complex, and intriguing story, with (for me, anyway) a somewhat flat ending.

Everyone kept telling me how amazing Hild was.  I kept putting off reading it, because it didn't look like SF and wtf, why do I want to read about some Christian Saint?  Everyone was right.  Y'all should all go read this one now.

It is (I guess? Eventually?) going to be about Saint Hilda.  This first book is about Hild, growing up in England in the 7th Century.  The beauty of the detail, the wonderful writing, the wonderful creation of character. It starts when Hild is three, and ends when she is a young adolescent.  In between she does both mundane and amazing things -- shears sheep, weaves cloth, slaughters brigands, climbs trees, forsees the future -- and is as engaging a character, in a book filled with engaging characters, as I have met in a long while.  She's also bisexual (so yay!) and living in an England that is moving from pagan to Christian, and not entirely easy about that shift.

This is a nearly perfect book.  Read it now. 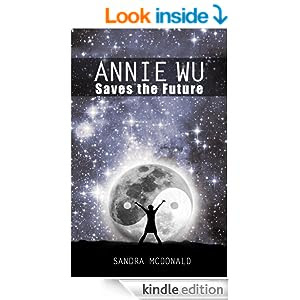 Sandra McDonald, as I believe I have said before, is one of my favorite writers. This is the beginning of a middle-grade series she is writing, and it's wonderful. Annie comes home from school one day to find out her past is not what she thinks it is -- I don't want to give spoilers, but the real past involves spaceships and time travel.

(Though this is indeed aimed at younger adults, I loved it to bits.  Just saying.)

Well, you gotta love T. Kingfisher, who (as many of us already know) is actually Ursula Vernon.  This is a collection of some of her short stories.  If you know Ursula Vernon, that's all I have to say.  My personal favorite is the re-telling of "Bluebeard's Wife," though, you know, it's hard to pick just one.

Jamie Harrison, Edge of the Crazies and etc.

This is a mystery series, sort of.

Harrison only wrote four of them -- Edge of the Crazies, Going Local, An Unfortunate Prairie Occurrence, and Blue Deer Thaw.

They're all great, though, with a well-developed cast of characters, from Jules Clement our depressed and moody sheriff, who grew up in Blue Deer, Montana, moved away at 18, and then returned for reasons he can't quite understand to follow in his father's footsteps and join its police force; to Alice and Peter, his best friends (one a lawyer, the other moving through multiple jobs); to Jules' mother and his various elderly relatives and friends; to the other officers of the law and locals.

It had been compared to Northern Exposure, and I do see why.  Harrison's humor is different than the humor on that show though; her writing and sense of place is great, and the use of police procedural and detail works perfectly.  I read these for the first time back when they were published as well.  They hold up on a second read excellently.


So what are y'all reading for fun?