I've been reading all along, but I see that I have stopped writing posts about it. Here's what I can remember reading over the past few months:

I love Bechdel (source of the infamous Bechdel Test). Her first two graphic novels, Fun Home and Are You My Mother? are both brilliant. This one is also good -- we follow Bechdel, decade by decade, as she uses different sorts of exercise in an attempt to achieve enlightenment, and also has a life. As with the previous two books, her readings in the field inform her quest, so we hear a lot about other people who have tried to achieve enlightenment, and especially those who did so through physical exertion.

The art is wonderful -- the influence of Dr. Seuss is even more profound in this one -- the writing is wonderful, and the book is excellent. Are You My Mother? is still my favorite Bechdel, but this one is very much worth reading. 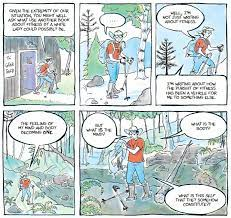 A Murderbot book. I will read anything about Murderbot that Wells publishes. This one involves a murder on Preservation Station, which Murderbot helps to solve. Lots of bots in this one. It's a novella, not a novel, but if your library is like mine, they've probably bought it.

This is the sequel to Catfishing on Catnet, which is excellent, and you should definitely read it now if you haven't already. Chaos on Catnet is a worthy sequel to that novel, set, as Kritzer notes, in the future Minneapolis she wants to live in. Me, too!

In this one, Steph and her Clowder, including CheshireCat, deal with the second AI who appeared at the end of the first book. Lots of other stuff happens too. Highly recommend, and not just because I like books about AIs.

Sarah Pinsker, We Are Satellites

A high-concept SF novel, by which I mean it works because of the tech it speculates about -- in the near future, brain implants make it possible for everyone to multitask effectively and to hyperfocus on any given task, while also accomplishing two or three other tasks. Anyone without a brain implant thus becomes a less attractive employee, a less accomplished student, a second-class citizen.

Certain people can't get implants -- those from certain religions, or those who have some sort of brain dysfunction (like epilepsy). And of those who get the implants, a certain number have ADHD like problems. The company that created these implants covers up the problems, with long-term consequences for those suffering them. (The implants rebuild the brain with long-term use: brain plasticity for the, uh, win.)

This novel focuses around a family of four, two of whom get the implants, one who can't, and one who doesn't. The family is the best part of the novel, especially the kid with epilepsy: the two moms are well done, and the family dynamics were also good. This is a family in which you can screw up, but still stay part of the family. I don't think that gets shown enough in fiction.