Warren's Rise in the Polls

538 has an interesting post on why Warren is shooting up in the polls. Read it here. 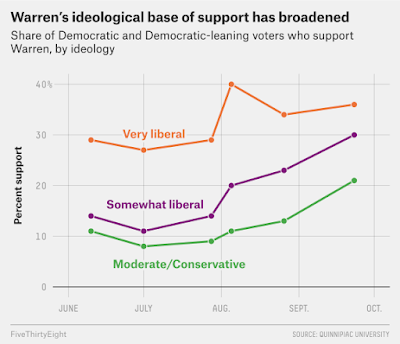 Her support is rising among moderates and Conservatives as well. I suppose that might be "moderate Conservatives," by which 538 means "not MAGA Americans." So not people watching Fox News; or not people who have lost the ability to differentiate between facts and propaganda.

(To be perfectly clear, I will vote for a yellow dog if that's what the Democratic ticket runs. Anything but the GOP. We have to votes these liars and thieves out of power. Still, I have to say, I like Warren.)