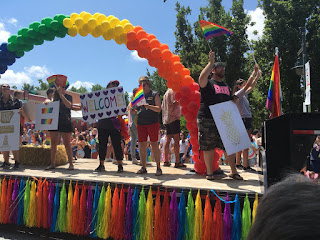 We spent yesterday up in Fayetteville, at the Pride Parade (if you're LGBTQ in Arkansas, Fayetteville is your oasis).

It was the Kid's first Pride parade -- mine too. "Whaat?" the Kid said.

"Well, they're always in June," I said. "Obviously. And you know how I feel about summer."

"Oh, right." The Kid thought this over. "You must really love me."

But it was a wonderful parade. The Kid said they might happy-cry. I don't know if they did, but I'll admit I did, once or twice.

Before the parade, we walked up and down Dickson Street, admiring the crowd: sassy girls wearing rainbow flags like capes, lovely shirtless boys holding hands, tiny toddlers in rainbow tutus running through the crowd, stately grandmothers with canes and rainbow flowers in their hair, and so many dogs. The sole sour note was an Evangelical standing on wall with a bullhorn telling all these wonderful, happy, celebrating people they would burn in the fires of hell. The Kid flipped him off as we went past.

We stopped at the little grocery store where the Kid shops when school is in session, to buy bottles of water, and stayed inside there in the AC to drink them.

Then we went out again, and down the street to sit on the curb in the shade of a big tree and wait for the parade. Some of our friends and their kids found us there -- I'd been looking for them, sort of hopelessly, because the crowd was huge -- and we spent the ten or fifteen minutes before the parade started catching up.

Also still enjoying the crowd.  More dogs! More trans and gay and genderqueer and Lesbian people! A set of tiny redheaded twins in fairy-princess costumes! A tiny poodle in a rainbow tutu! A large man with an impressive beard wearing a shirt that said: TRUMP IS THE ONLY DICK I CANNOT HANDLE.

The parade itself began right on time. It was pretty wonderful.

The best parts, I think, were the UA-Pride organization, which the Kid has not yet been able to join, because their studio art class conflicted with it all last year; and the Socialists For LGBT Rights (there was a guy from the IWW there -- Dr. Skull shouted out to him something about Joe Hill, and made his day); and the local Jewish temple, Temple Shalom, marching in the parade.

Lots of religious groups marched, by the way -- not just the Jews! But obviously we were very pleased to see the temple there.

Also the atheists marched. That was nice too! 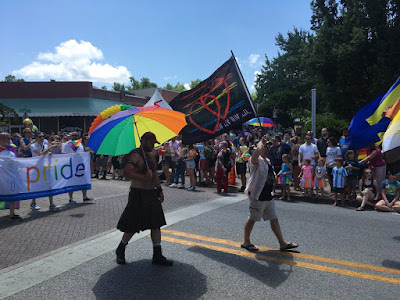 Also, two of my ex-students were in the parade. (That's not them above!)

All in all, a wonderful experience.

Looks like a wonderful parade and gathering! So glad you had a good time!