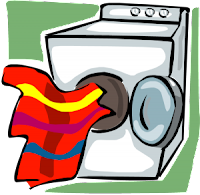 Inspired by a post at Nicole & Maggie's blog, I took apart my dryer venting system yesterday, using a vacuum and leaf-blower to clear (what I hope is) all the lint out of both the internal and external venting line.

The W/D hookups in our current house are the worst ever. Originally, this house (built I think in the mid-1960s) had no hookups. At some point, one of the previous owners added a laundry space. But rather than locating it, sensibly, against an exterior wall, they located the laundry room (really a closet) in the middle of the house. Thus, our vent line has to travel about sixteen feet underground -- yes, they dug an underground line, under the house's slab -- to emerge in a dug-out hole exactly where the AC vents its water.


You can see the problems. First, in the summer the dug-out hole is constantly filling up with water, which backs up into the dryer's vent line. Clothes won't dry when the vent line is literally full of water. I handle this by emptying the dug-out every two or three hours. (It's tiny, and fills up quickly.)

Second, a vent line that long is almost impossible to keep clear. When we moved in, in fact, it was totally clogged and probably had been for years. Don't ask me how the previous owner did her laundry. Maybe at her kids' house? Anyway we hired a repairman, who came and used a roto drill of some sort to open the line.

But it had clogged up again. A normal load of clothing was taking two to three hours to dry, and sometimes not being entirely dry even then.

I thought of calling the repair guy -- but he had charged us over a hundred dollars the first time, and right now I'm on summer pay, with a kid starting university in six weeks. I don't have ten dollars to spare, much less a hundred.

So I took apart the system, finding, yes, that the line was once again nearly clogged with lint. I used our shop vac, vacuuming from both sides, and then our leaf blower (which we only own b/c Dr. Skull uses it as a kind of bellows, to fan up the flames when he's using the smoker) to blow out the line from the inside.

Getting it all back together was the hard part. The laundry room, as I said above, is literally a closet, and a very tiny one at that. Once the dryer was back inside it (as it had to be, for me to hook back up the vent) I had about nine inches of space to work in. Picture me lying on my side, wedged up against the closet wall, screwing the vent hose in by touch. And cussing, a lot.

But! The operation was a success. The dryer now dries a load of clothing in less than 20 minutes. Even heavy towels dry in less than half an hour.

And I was about five minutes away from thinking I needed to buy a new dryer. So thanks, N&M!

I'm hoping this will lower my electric bills, too.