America: Where You Can Be Free....as Long as You're Like US!


So as many of you know, the new battle against LGBT people from the Far-Right Conservatives is being waged in the bathrooms.

This is nothing new.


When the Far-Right Conservatives fought against civil rights for black people, they chose bathrooms as their battleground then as well. (Do you want black women, with their terrible diseases, putting their black bottoms on the same toilet seat as your pure white daughters?)

When Feminists tried to pass the ERA, the Far-Right Conservatives -- once again! -- chose bathrooms as their tool. (Do you want your sweet little girl to have to share the bathroom with big hairy men?)

And so here we are.  If LGBT people get equal rights, your sweet little innocent daughter and your pure wife will be raped by...um...well, trans people, I guess, except (1) why would a trans man be in the woman's bathroom and (2) why would a trans woman rape a woman?  She's a woman.  I guess she might be a Lesbian trans woman, but even so...

Yesterday he blogged about this sign, which offended him deeply, for reasons I can't fathom.

As some of you might know, my kid is genderqueer.

As a young queer kid, when she was eleven and twelve I mean, she had real trouble with public bathrooms.  She did not perform her gender well -- she looked very much like a young boy -- so that when she went into the women's restroom, she got real trouble from the other girls. 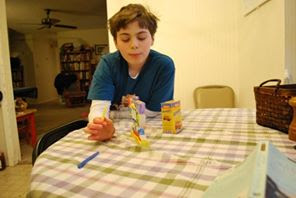 And by "real trouble" I mean she got shouted at and (often) physically attacked by the other girls.

She considered using the men's room, but that seemed even more dangerous.

What, exactly, would Rod Dreher and his ilk have a young genderqueer person do?

(I kid: I know exactly what Rod wants young people like my kid to do: put on dresses.  Grow long hair and braid it.  Simper and prance.  Never mind that this is not what my child is.  Perform the act, Rod says, because... well, you know, I can't fathom why my child should have to act like what she is not to make Rod and his ilk happy.  Seriously, I just can't.)

That went on for years.  She's still not quite over it.

I love them.  Those are signs of enlightenment to me.  Of liberation.

Anyone who thinks otherwise can, sincerely, fuck right off.

That sign is great. It doesn't even say Dreher can't use that bathroom - it says how he has to behave if using that bathroom and if he's uncomfortable go use another. So much freedom for everyone! And safety for people who wouldn't have it otherwise. Wins all around.

That was exactly my reaction. Rod Dreher's reaction -- entirely other.

I've been reading Candide, which I'm teaching in my class today, and there's a passage where Candide and his valet are in El Dorado, which is the closest thing you get to Utopia in the book. They're wealthy, happy, and have everything they could possibly want. The problem, from their perspective, is that everyone *else* is also wealthy and happy and has everything they could want.

So they leave, taking mountains of wealth with them, to return to Europe, where they will be wealthy, if less happy, and everyone around them will be miserable and poor.

This, it strikes me, is what Dreher and his ilk want. It is not enough for them in their world that *they* be seen and applauded as happy and normal (his famous "Benedict Option"). No, for them to truly happy, other people must be scolded and made miserable and seen as freaks.

That's what they mean by a "decent society."

My school's starting to put in gender neutral bathrooms. And you know what? Everyone just uses them and seems perfectly happy doing so.

I suppose the good part of this is the reminder that pretty much no one worries about people of different races using restrooms or restaurants together these days. We all seem to be sharing drinking fountains (or bubblers, as they're called here), too.

Ha! Yes, excellent point, Bardiac. In 50 years, this will be a non-issue as well.

Or sooner. One can hope!