Oh, Noelle Stevenson, Why You Want To Be Treated Like A Human?


Over here at Noelle Stevenson's Tumblr, she posts a comic on why she doesn't like to go to comic shops: comic. 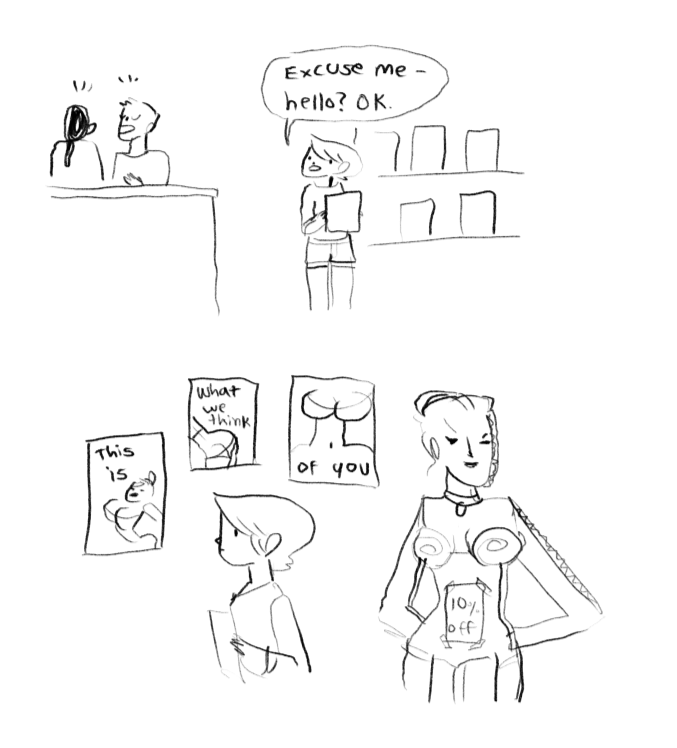 In case you haven't been reading Stevenson's Nimona, it's one of the best online comics at the moment.  Not just me who thinks so either.  She's been getting a ton of recognition in the comic world and elsewhere.

So it's not like she's just some random person discussing this situation -- she's a professional, selling comics to major publishers and winning awards.

And yet: when she posted this comic on her blog, many of the comments were far from supportive.  Most (1) denied this problem even exists (2) said if it did happen, it was all Stevenson's fault, because she was too touchy, or she expected to be treated badly, or she was too weak and girly to stand up for herself, and therefore... (3) or called her out as a hypocrite, since how dare she object to being treated like a sex object when she had used the words "sexy" about a male comic book character or (4) just went straight to the incoherent ad hominem.

In the end, Stevenson had to shut off comments on the post and close her Ask box, at least temporarily, in order to escape from the vitriol.

One good thing came of it: her fans and other interested parties showed her a Tumblr which lists inclusive, non-asshat comic shops.


Stevenson's other advice for Entering Comic Shops While Female.


There are so many sites where fights to name and counter misogyny etc are intense- but the sci-fi, comic book and speculative fiction genres seem to me to be a particularly public and hard fought battle for women at the moment.