As most of you probably already know, our state legislature overturned our governor's veto on the hate bill. This is all virtue signaling -- the ACLU is already planning to challenge this "law," and will certainly win handily, given that the bill clearly discriminates against one class of people.

The GOP and other bigots are showing their true colors here, of course. No government overreach, they howl -- unless that overreach allows them to hurt the people they hate. Then it's fine.

Meanwhile, in North Carolina, their legislature is voting to make it a crime for a medical professional to do anything that allows a trans kid to "present themselves" as their actual gender. And it will force teachers to report any kid who seems "gender non-conforming." 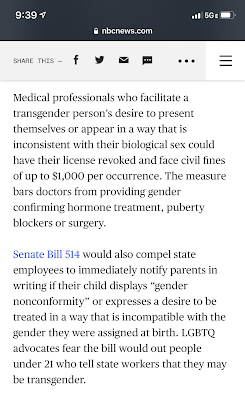 This is utterly sickening. The fact that these laws can't stand does not erase the fact that citizens of my country think such vile bigotry is just dandy.

None of us are going to forget, though. I promise you that.