As always, these are just the books I'm currently reading which I like a lot -- you may assume the presence of several (even possibly several dozen, since I don't usually finish books that bore me) books I read that are not on this page, for some reason or the other.  These might be books that made me go meh.  They might be books I found annoying or silly.

Books I find actively horrid or harmful I will often blog about, OTOH!

This is the book I am currently reading, and I do recommend it, though with reservations.

The plus: Deresiewicsz provides a readable, engaging text, and it is filled with genuine insight about Austen and her novels.  If you are an Austen fan (as I am) you will find this book a wonderful and worthwhile romp.

My own favorite chapters are those on Mansfield Park and Persuasion, no doubt because those are my two favorite Austen novels; yet the opening chapter, in which Deresiewicsz recounts his own reading of Emma, and how it taught him to read Austen -- or rather, how Austen's brilliance taught him to read the world in a new and better way -- is as deftly constructed as a detective story.

And yet.  And this isn't even a big problem.  You can get past it.  But holy hell, the sexism.

You'll be glad to know, for instance, that Jane Austen can play with the big boys.  That she's worth reading, even if she's a woman.  That her style -- girly though it is -- is "every bit" as good as anything the men write.

Some of this is probably exaggeration for effect.  Let's hope.  Nevertheless, it does grate on the nerves.  And I could have done with hella less of it.

This is a middle-grade SF novel, which as long-time readers of the blog know is not a problem for me.  That is, I read books at every level, from picture books aimed at pre-school kids, up through grade school books -- Hilary McKay's books are among my favorite, not just kids' books, but books of all kinds -- and on through Very Serious Books Indeed, Middlemarch being one of the books on my Top Ten list.  (Well -- top 20 list?  Top 50 list?  Who can narrow it down to ten?  Seriously?)

Anyway!  Mars Evacuees, aimed at middle-grade readers, is a romp, more than a Very Serious Book Indeed, though it has its serious bits.  Its main character, Alice Dare, is caught up in a long-term war, between Earth and alien invaders who have taken over the planet after fleeing their own set of alien invaders.  As the book opens, Alice and several hundred other children are being evacuated to Mars, to be trained as the next generation of soldiers to fight the alien invaders.  Alice doesn't especially want to be a soldier, but is realistic enough to know she doesn't have much choice.

Plenty of good details in this (somewhat) episodic novel, which really took off for me when Alice and her friends met up with one of the alien invaders, lost in Mar's outback.  (No spoilers, but very cool.)

Also very episodic, as it would have to be.  It's a graphic novel.  We're well into episodes.

This has beautiful art, and great characters -- I think The Will might be my favorite, though who knows, it's hard to choose, Izabel (the adolescent ghost who is only half a girl, due to being killed by a landmine in the planet's war) is great, and you gotta love Sophie, and Lying Cat -- who can't love Lying Cat? 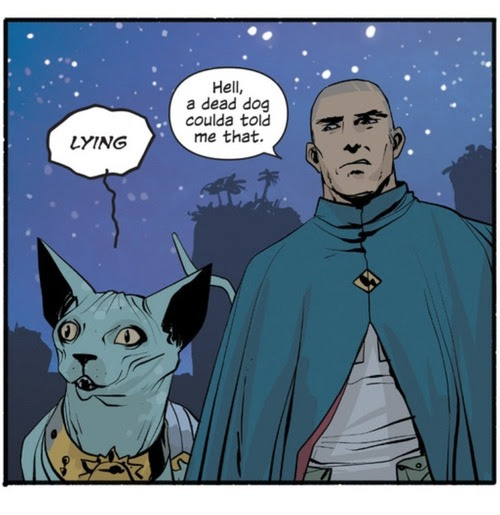 Not much advances in the plot in this episode of the book, but nevertheless we have a lot of fun.  And I am always willing to spend time with these characters.

TBH, as the kids say, I only bought this one because it had a story by Eleanor Arnason in it.

Still, well worth the ticket, if only for the Arnason story, which -- as you can count on when Arnason is writing the story -- is wonderful.

The conceit of this anthology seems to be that we re-imagine a Golden Age Venus, from SF of the 1930-1960s, before we knew what Venus was actually like.  The writers have found various ways of doing this.  Arnason postulates an alternative history, and includes -- as she did in her Women of the Iron People -- a (slightly) more successful Soviet Russia to go along with it.  The tension between Capitalist and Communist ideology playing out in the company towns of Venus gives force to Arnason's story, "Ruins."

The story also features the group of characters which is her forte -- Arnason does this multi-character story really well.  My favorite character here is probably the baby pterosaur, named Baby (really a pseudorhamphorhynchus, though he disputes the pseudo bit); though Arkady is a close second.  And who could not also love Maggie, our Autonomous Leica?

Other stories I liked a lot in the book include Tobias Bucknell's "Pale Blue Memories," about why you can't just start a slave revolt or run off from slavery (I am probably not wrong in reading a reference to Heinlein's "Logic of Empire" here); Gwyneth Jones' "A Planet Called Desire"; and (mostly for its ending) Joe Haldeman's "Living Hell." 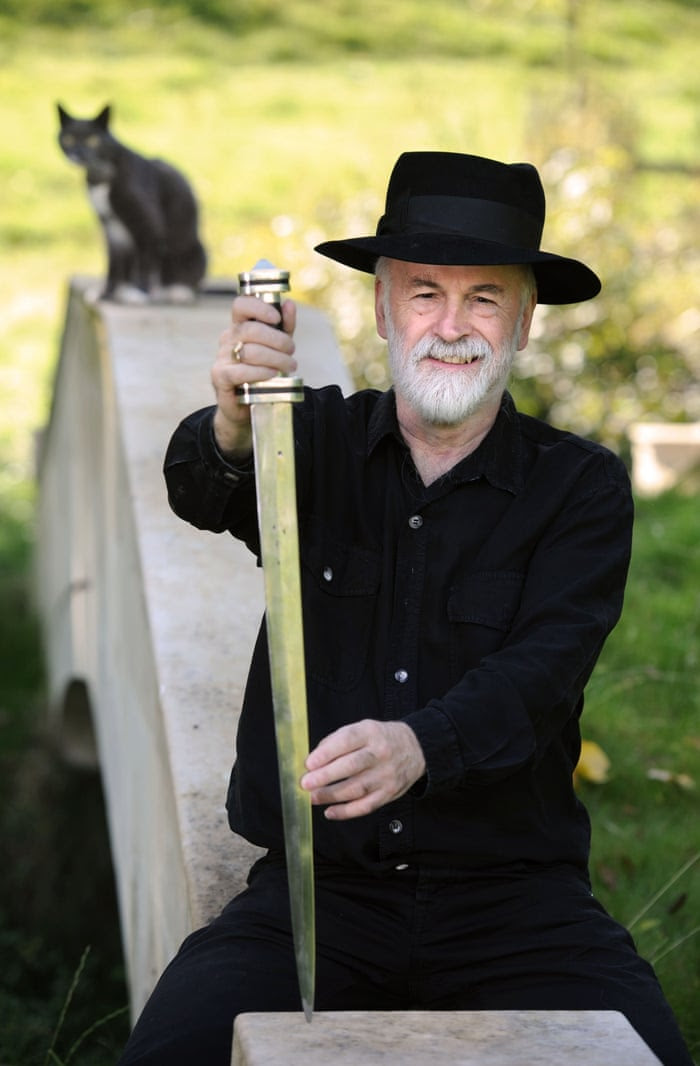 “Vines had never got on with any game much more complex than darts. Chess in particular had always annoyed him.  It was the dumb way the pawns went off and slaughtered their fellow pawns while the kings lounged about doing nothing that always got to him; if only the pawns united, maybe talked the rooks around, the whole board could’ve been a republic in a dozen moves.”

Right now I am just reading a lot of Terry Pratchett, that's all.

Edited to add: Here's Sir Terry with his famous sword, the one he forged from a meteorite.  (Photograph by Adrian Sherratt/Rex Features.)