My mother is much better. I talked to her on the phone yesterday, and my brothers who live nearby no longer think they'll have to put my parents into assisted living. Also, since they've started making sure my father eats three meals a day, he seems to be doing better too. This is such a relief, I can't even tell you.

The little dog is also doing better. I have to inject him with insulin twice a day and test his blood sugar frequently. It's still a little high, but not in the 500+ range, which was where it was before. (Now it's between 200-300.) And his energy level is better -- he runs around like he used to, and is back to chasing (never catching) the rabbits who live in the yard.

I have crocheted seven hats (one for the kid and each of his roommates, one for Dr. Skull, and three for me); one scarf; a failed sweater; and most of a blanket. I'm working on a new sweater now, which I hope will be more successful. Crocheting, I have found, is the perfect thing to do during interminable zoom meetings, of which my university is currently holding many.

How's everything where you are? 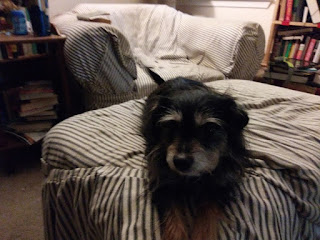