The damage to Notre Dame was not complete -- it did not "burn to the ground" -- though it was bad enough.

Those fighting the fire managed to save many of its treasures.

And not only were the Rose Windows saved, so were many of the other windows. 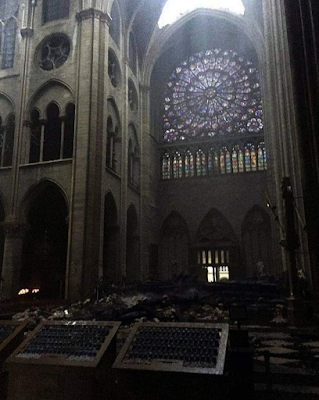 The worst damage was to the part where the fire started -- the part being rebuilt. Which makes sense.

It will take years to rebuild, but the rebuilding can include what earlier generations did not: fire prevention technology:

Any reconstruction of Notre Dame will surely involve fire engineering to protect the iconic building from any future fire, according to Professor Guillermo Rein, Professor of Fire Science, Imperial College London.

He added that fire engineers will then consider a combination of layers of protection (prevention, detection, evacuation, compartmentation, suppression and endurance).“Note that the previous timber roof that burnt last night was relying only on one single layer: prevention,” he said.

“The roof was known to be flammable, but they avoided the arrival of ignition sources. Unfortunately, it seems that the renovation works might have brought the ignition source which might have caused the accidental initial fire. I think the roof space had no detection, difficult evacuation, no compartmentation, no suppression, and no endurance.”

So yes, the source of the fire was an accident caused during the construction work. Not terrorism. Not a 'sign' about Christianity's collapse, or the decadent West, or what Islam is going to do to us all.

That won't stop the MAGA Americans, though, who are taking no pleasure in finding their hateful predictions are wrong:


Who is going to believe the “official” explanation for the cause of the Notre Dame fire?