Update on the Virus in Arkansas


Covid-19 is spiking in my state, though we're still doing better than many places. We have over 20,000 confirmed cases now. Our governor, who is a Republican*, cautions that that number is probably low, since we haven't done that much testing. Nationwide, over 126,000 people have died. So far**.

I, for instance, did not get tested. This is only partly because I'm afraid of how horrible the test sounds. Ever since I had a "esophageal manometry" test done before my stomach surgery, I have a literal phobia about things being stuck up my nose.

But mainly I avoided it because I'd heard horror stories about how much people were being charged for the tests. I'm already paying 20% of my income for medical costs every month, so miss me on that.

Despite the increasing number of people infected, and hospitalized, most people in my town are still not wearing masks. When we make a grocery run, I'd say about 20% of the people in the store are masked. And I had someone inform me on FB today that the "Kung Flu" was not a big deal, and the "Democrats" were exaggerating the effects of the virus in order to "start a race war."

I blocked her. That's my new policy -- one strike, and fuck you.

Meanwhile, our university has formulated the beginning of a plan for how we might resume classes in August -- split classes in half, and teaching half the class on, say, Tuesday, and half on Thursday. Public schools might well be doing a version of this. That will leave half the students at home on any given day, and I have no idea how parents are going to manage that.

How are things where you are? 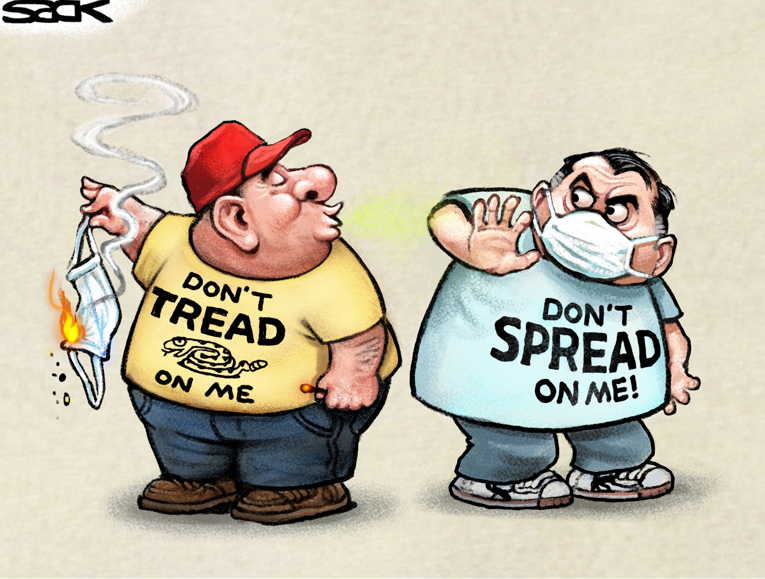 *I mention that he's a Republican because apparently simple data is now a political issue, just like wearing masks.

All these people are totally just mysteriously dying of things they totally would have died of anyways, and absolutely all at once, right?


Exactly! They're having heart attacks, see, or they're dying of cancer, and the doctors are cunningly claiming they died of Covid-19 in order to get the big Federal $$$!

What do you mean, the death rate is elevated? NONSENSE! It's all a scam!

You really can't hold an reasonable discussion with people who have eschewed reason.

I'll tell you what, the stress from having to deal with coronavirus denialism is enough to make me sick all by itself.


Same. I've had to ban myself from reading conservative sites for awhile.

Things are not good. I live with a mother who can parrot every conspiracy theory Glenn Beck comes up with, and then makes up some of her own.

She accepts that the death rate is elevated. Her latest claim is that Democratic governors have been deliberately spreading COVID-19 in nursing homes in order to kill people. Why would they want to kill people? According to her, they are intentionally creating deaths in order to make Trump look bad.

She really is something else.


That's what I've been getting from conservatives on FB -- that "democrats" are deliberately lying about pandemic deaths to hurt Trump.

As if he needed our help.

I'm so glad you're doing better, at least. The increasing deaths and illnesses could have largely been prevented.

I don't know how we're going face to face this fall. I'll believe it when I see it, but if I see it, I know we're going to have a lot of people getting sick. And I worry so.

That's not what my mother is claiming. She says the death total is real.

She also says that Democratic governors are deliberately creating outbreaks in nursing homes in order to increase the death total.

She accepts that all those 120,000 people have died from COVID-19. She just says that Democrats infected all of them to discredit Trump - in other words, the Dems used the virus to murder 120,000 people. Then, according to her, they blame Trump for the murders. By committing more murders, they make Trump look worse.

It's a completely different conspiracy theory than the one you've seen from denialists.

OMG, D. Shannon. That might be even worse than what I'm seeing.

But it does go along with the Rabidly Right who love to paint everyone on the Left as murderers, so I guess points for consistency?

Bardiac: I have no idea how we'll go F2F either. It's six weeks off! And the first wave hasn't even crested here.