Misunderstanding the Point of Protests


This was shared by someone on my FB Timeline who is a center-left person, on the whole, well-educated and sane. They work as a social worker, so they have some life experience.

I've seen similar memes and comments from people both on the Right and Left (though more from those on the Right). When the posters aren't just arguing in bad faith -- which does happen -- these comments stem from a fundamental misunderstanding of what protest is for and how it works.

I interrogated one of these people once, asking them what form of protest they would find acceptable. Their answer -- after they obfuscated a while -- was that people should stand off to the side of a sidewalk (so that they don't block it) holding up signs quietly. The signs should have civil requests on them: like, "Please Give My People Civil Rights."

Well, that's not how protests work. That's an ineffective way of protesting.

Those in power will never surrender their power of their own free will -- why would they? The status quo is fine with them. The way things are is working well for them. Why would they disrupt it, especially for people they don't care about and usually actively dislike?

For a protest to work, we have to create a world in which the way things are no longer work well for those in power.

We can do this by occupying lunch counter seats, or by boycotting their businesses, or by blocking traffic, or by surrounding the seats of power with immense crowds which draw attention to the ineffectiveness of those in power, or any number of other ways.

For example, the Right to Life brigade mounted a daily, non-stop protest outside the strip mall where Planned Parenthood in Fayetteville was located. This was where my kid was getting his check-ups and his prescription for HRT. They harassed anyone who drove in or out of the parking lot, non-stop. They banged on windshields and shouted about killing babies, while holding grotesque signs against people's windows. They caused so much disruption to the businesses in the strip mall that when PP's lease came up for renewal, the owner of the strip mall refused to renew it.

And they also made it clear they would do the same to anyone else who rented to PP. To this day, PP in Fayetteville has not been able to find a location in order to re-open.

Whatever you think of the Right to Life Crowd (I think they're willfully ignorant bigots), you have to recognize that this was an effective protest.

The key factor in any protests must be the disruption of the status quo. We must make it impossible for those in power to continue business as usual. 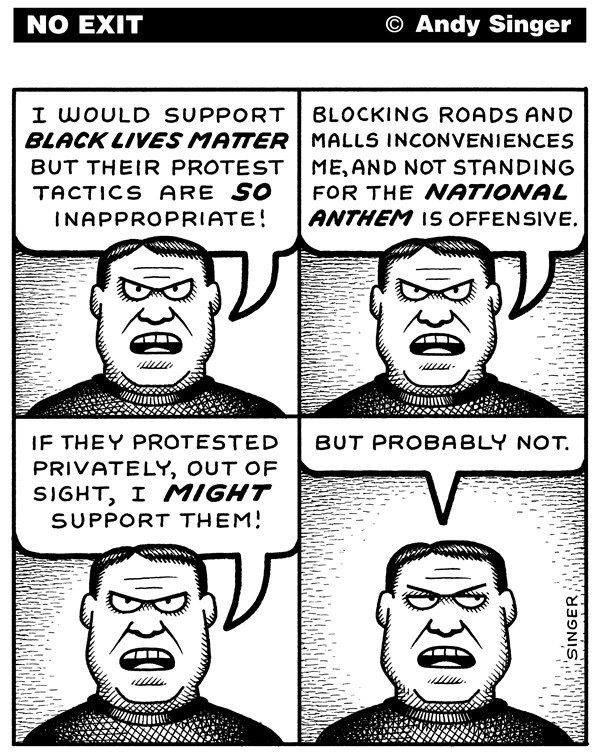