Some of you may already know Rainbow Rowell, for her previous YA novel Eleanor & Park, which was a wonderful novel.

Fangirl is even better.

I won't give too many spoilers here, but Fangirl is about Cath, who as the book opens is starting her freshman year at college.  This is not like any first-year-at-college novel you have met before, however.

First, and maybe most importantly, Cath writes fanfic.  She doesn't just write it, she's a superstar, getting thirty-thousand some hits every time she posts a new chapter (of her fic for a alt.universe version of Harry Potter, called Simon Snow).

Second, Cath and her twin sister Wren have a complicated family life: a father who is manic-depressive; a mother who abandoned them when they were eight; their own issues with anxiety and other disorders.

Third, wonderful and fully-developed secondary characters, from Reagan, Cath's roommate, to Nick, the boy in her Fiction Writing class.  And of course Levi, whom you are going to love to bits.

I love everything about this book, which I stayed up way too late last night trying to finish, but the fanfiction aspect is my very favorite part, I think.

Far too often, teachers of writing and other writers treat writing fanfic like it's idiotic, and even corrupting for writers.

But in fact writing fanfic is very much like an apprenticeship for young writers -- that's one thing.  It gives them space to play and learn, and publish their writing, and get realworld reactions to that writing, in a way that just is not possible with "traditional fiction," whatever that is.

Further, the creation of fanfic is not, in fact, very different from what writers have been doing from the time writing began.  What are half the Greek tragedies, but fanfic of Homer?  What's Paradise Lost, but fanfic of Genesis? What did Shakespeare ever do that wasn't fanfic?

(Oh, but that's different, I've heard people argue, because that writing is good.  This tells me they have spent very little time reading fanfic, frankly.  Yes, crap fanfic exists; but 90% of everything is crap.)

Fangirl captures all this perfectly: from the skill and drive that Cath learns from writing fic, to the reaction from her teachers and peers who aren't part of the fic tradition, to just what is so compelling about writing and reading fanfic. ("It's never over," Wren tells her at one point.  "It's Simon.")  And -- importantly -- Cath pushes back at those who shame her for writing fic.

I'm leaving a lot of plot out of this review.  There's more plot than this!

And -- I see I have forgotten to mention! -- a cover by Noelle Stevenson.

What is not to love? 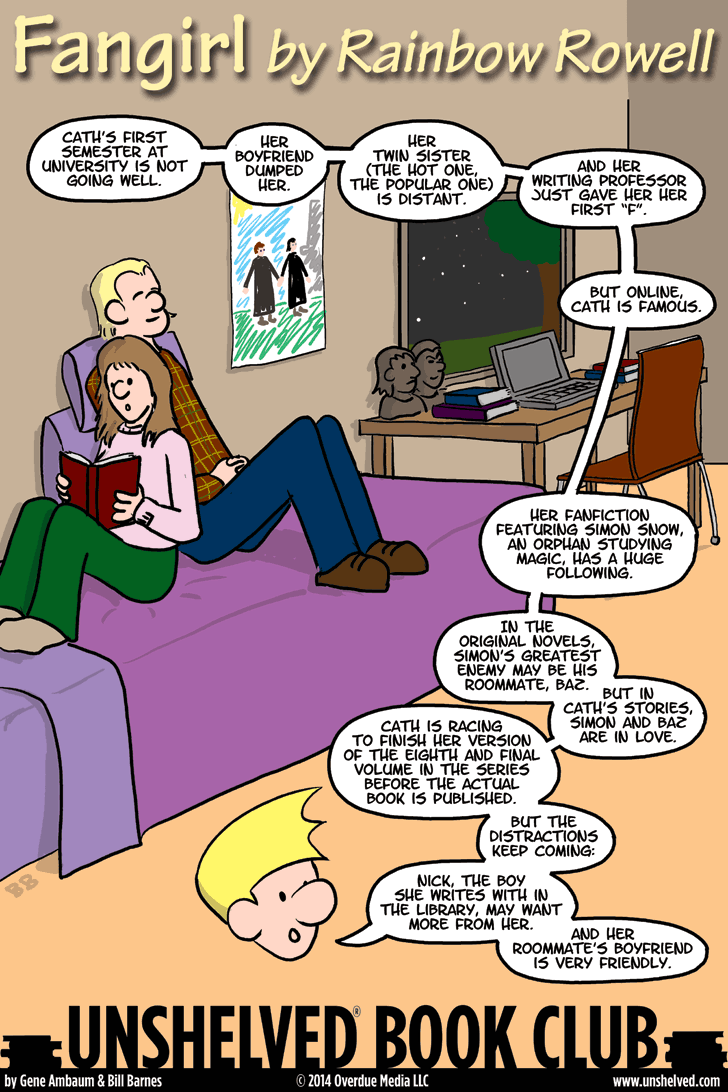 The Snork Maiden loves this book, and now I know why. Off to read it!

This sounds like such a wonderful book, I bought it a few weeks and will probably be starting it very soon. Curious now as to how I'll find the ending! Brilliant review :)

I love this book. I love it. And I love the timing of it, with my life. I mean, it couldn't have been more perfect.